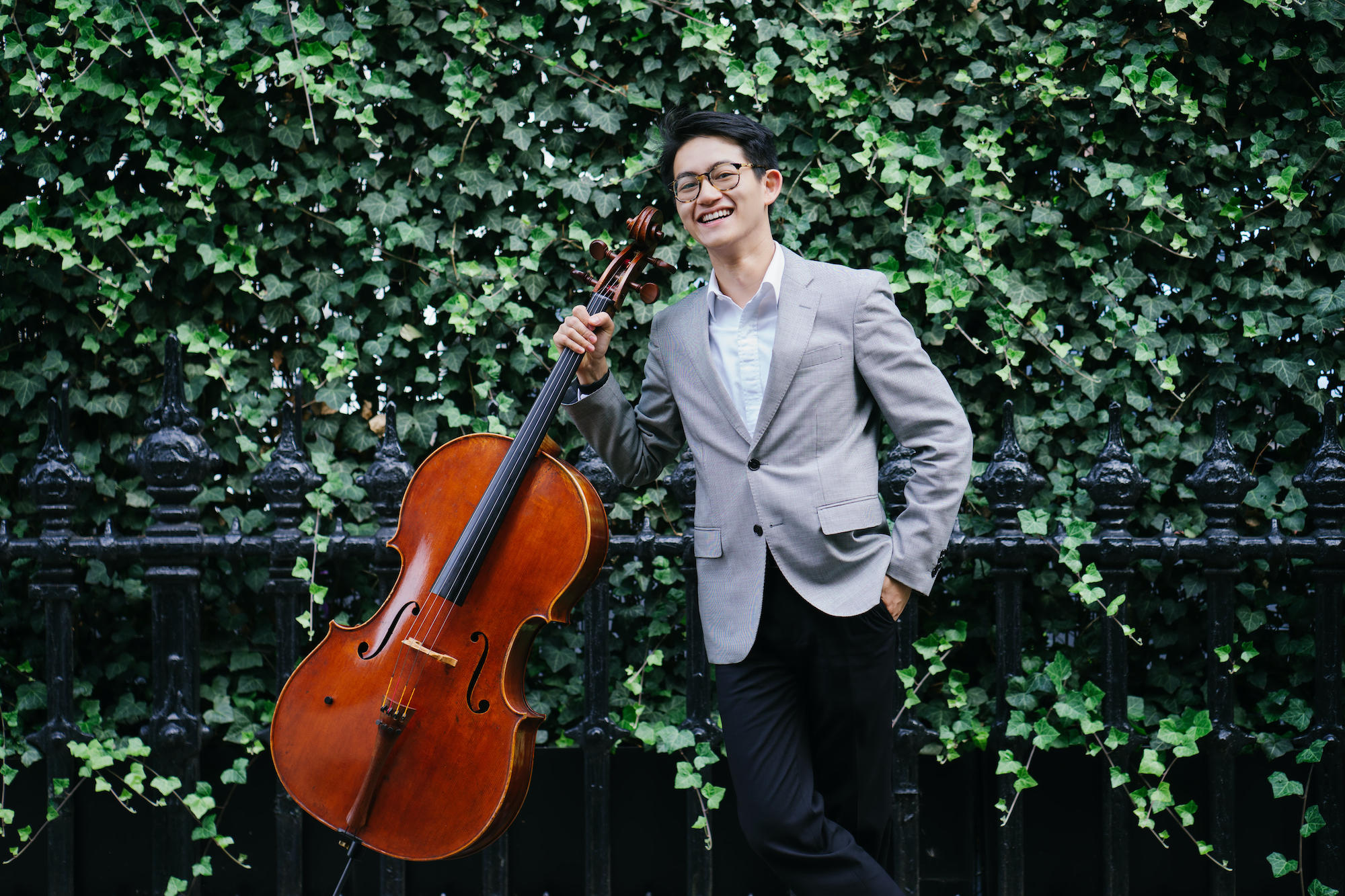 Nathan Chan is the third chair cellist at the Seattle Symphony.  He is the youngest musician in the symphony and is praised with a list of musical performances from age three.  From Mozart and Beethoven at a toddler’s age, Chan went on to perform all through his formative years playing with the San Francisco Symphony, the Royal Philharmonic, Albany Symphony, Reno Philharmonic and the Hong Kong Chamber Orchestra.  Chan has a strong enthusiasm to make classical music a ‘must’ for anyone with the yen for the musical experience. “My fascination with the intersection between liberal arts and technology have led me to combine classical music with technology and social media…. It’s my life’s passion to make classical music exciting to our generation!” He tells interviewer, Maisy Chan. Chan recently graduated from Columbia University and the Juilliard School.

Maisy Chan:  There is the late Eudora Welty, a famous American Southern writer, who entitled her book of lectures from 1984, One Writer’s Beginnings.  She said that her journey as a writer had been the “confluence” of many things.  What were the “beginnings” of your music?

Nathan Chan:  My “beginnings” in music started quite humbly, but crucially set the tone and momentum for my musical journey. As a toddler, I used to watch LaserDisc videos of famous conductors such as Herbert von Karajan, Leonard Bernstein and Seiji Ozawa. The deep connection between the physical gestures I saw on screen and the music I heard became evident as I conducted with a chopstick alongside the music I saw on screen – I even splashed water on my face to simulate the sweat I saw on the conductor’s faces!

Once when I was two, I attended a concert in which I began conducting in my seat, and as luck would have it, the assistant conductor of the San Francisco Opera (Sara Jobin) was sitting a couple rows behind me. She was astounded by what she saw and ended up introducing herself to my parents, later becoming my first musical mentor. She ultimately trained me for my conducting debut a year later of Beethoven’s Fifth Symphony with the Palo Alto Chamber Orchestra at the age of three. This confluence between visual media, technology and music resonates with up until this day, as I’ve always been fascinated between the intersection of liberal arts and technology.

NC:  I was actually initially drawn to the double bass because I loved the low sounds of the orchestra. But I was (and still am) a pretty small person, so my parents were wise enough to take it down a notch in size, and we settled on the cello. I’ve learned over the years that the cello is an incredibly versatile and creative medium for expressing myself. They say the range of the cello is most like the human voice, from soprano to bass. I can very much step forward or step back in both supportive and leadership roles. One of the things I love about being third chair cello with the Seattle Symphony is that this group of cellists are risk-lovers and would rather communicate to our audience than play it safe. This translates to an electric and exciting cello sound that is unique to the Seattle Symphony.

MC:  What is your schedule this spring and summer? Is there a concert, recital or a recording upcoming that you like to talk about specifically?  How do you prepare for a specific performance, which is unfolding in the next several months?

NC:  I feel so grateful to not only be able to perform at a high level with the Seattle Symphony, but am also able to explore and engage with my creative passion projects outside of the hall. I love finding ways to express myself through music and technology, and am especially intrigued at the way the internet has magnified one’s possible reach outside the concert hall. I recently released my first music video featuring the city of Seattle on my YouTube channel. With the Seattle Symphony, I am so excited to be traveling on tour to California in April performing the music of John Luther Adams that we are so well-known for.

In addition, I am very excited to be performing the Schumann Cello Concerto with the Cascade Symphony in late 2018, as well as Tchaikovsky’s Andante Cantabile. Being very prepared with a sense of clarity and precision makes me feel the calmest leading up to a performance, but then in the moment, I love to embrace a more spontaneous type of improvisatory playing. This allows me to be the most free while making sure I’m still sounding good.

MC:  Who had been your most influential music teacher?  Why is that

NC:  All my teachers have played critical roles in my development. I am so appreciative of my first teacher, Irene Sharp, for surrounding me with the fundamental building blocks of cello playing, especially in grasping the major milestones of the repertoire. My second teacher, Sieun Lin, so expertly helped me navigate the nuanced strategies of focusing on one’s musical strengths and maximizing their potential. My teacher in college, Richard Aaron, really gave me the tools to be a strategic problem solver and detective in the practice room and on the stage. And my experience with Gautier Capuçon in the Classe d’Excellence du Violoncelle in Paris, France, taught me to embody “bigness” in sound, presence, intellect and how to think like a master of the cello.

MC:  Do you improvise even in classical music?  What is the most ad-lib performance you have had in your young career? What does improvisation mean to a classical musician?

NC:  As a musician, I think we should always be improvising when we play, especially in how we react to our audience. I constantly feed off an audience’s energy whenever I perform and eagerly find a space of empathetic communication with one another. I’ve always especially enjoyed unexpected types of audiences, like busking. Busking on the streets can be one of the most demanding types of performances because there are no preconceived notions. You must be able to communicate, connect and reach deep within to the most organic type of music making possible.

MC:  Where do you see yourself in five years?  In terms of your music creativity, your musical output and also how music ‘molds’ you as a person?

NC:  I am a very project-oriented person. This gives me short-term goals and long-term moments to reflect upon what went well and what didn’t, and adjust. To me, being a creative person means always having the itch to share things with others. Ever since graduating from Columbia University and The Juilliard School last year, my collaborations with orchestras, students and artists around the world (and now as third chair cello of the Seattle Symphony) have consistently challenged me into thinking how my classical world fits into our modern, fast-paced society. My fascination with the intersection between liberal arts and technology have led me to combine classical music with technology and social media, resulting in a YouTube channel with over 6.8 million views and an Instagram account with 14.7k followers! It’s my life’s passion to make classical music exciting to our generation!

MC:  What is it like to travel so much to perform your music?  Besides jet lag, do you sometimes get confused with the music and not just time zones and difference of continents?

NC:  I love traveling as a musician mostly because I get to meet lots of interesting folks and have the opportunity to find common ground. Connecting with one another over this wonderful artistic medium makes me feel enriched and fulfilled. The travel bug is a real thing and fortunately being a musician is one of the great careers in which this itch can be scratched.

MC:  Do musicians differ in different places (if just in the U.S., like comparing the West Coast with the East Coast, etc.)?  Does where musicians are trained such as the various musical observatories and schools of music help to springboard a musician on a successful path?

NC:  I think the best musicians can take their identity and origin of study and turn those unique characteristics into their own. I’ve always admired European music making, but love the modernity and practicality of other cultures music making. I always learn something by studying and listening to others; where a person comes from does not concern me too much.

MC:  Is music competitive?  Do you have to enter musical contests to get your name out there?  Or, just to land an agent and a contract?

NC:  I am a big believer that music is all about communication, not competition. Once you begin to think about music competitively, you lose the essence of its meaning and twist it into something obtuse. Music has become too competitive; supporting each other as colleagues is the most important thing we as musicians can do. We are all in this together and when you help each other, the entire musical world is improved.

MC:  Finally, do you bond with a piece of music? What music would you use as an example?

NC:  What I love about playing a piece many times is that knowledge is transferred back and forth between yourself and the music. As you inject your own sense of creativity into a piece, you find it reacts and teaches you something too. This is the bond that we as musicians feel! I’ve learnt to be quite humbled and be in awe of it. Good music is good music.