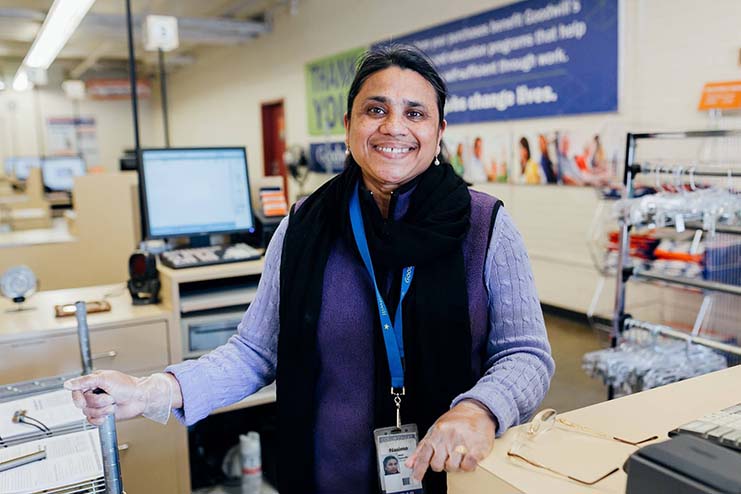 Nasima Parvien has lived in Seattle’s Columbia City neighborhood for 22 years and has had a successful career at Goodwill for the past 20 years in the customer service department. Her two kids, a 15-year old daughter and 24-year old son, both raised here in the United States, are making her a proud mother with their educational goals and aspirations and their ties to Bangladeshi culture. She shared her story with the IE about her experience as a first-generation Bangladeshi woman immigrant – recalling the earlier days, the cultural barriers and her hopes for the future.

Parvien is originally from the city of Kushtia, which is a district in the western division of Bangladesh called Khulna. She came from a big family, consisting of nine sisters and two brothers. When she was five years old, she began living with her older sister, who for the most part lived alone due to her husband having a job that transferred him to different places quite frequently.

This led to Parvien living in many different parts of Bangladesh as she was growing up, including Nator, Naogaon, Sirajganj, Bogra and Pabna. She said moving around so much with her sister and brother-in-law was an amazing experience, but it also led to some study gaps, which she had to constantly make up for. She passed her metric exam in 1986 and then attended Kushtia Girls College with a major in history.

Shortly after graduation, in 1989, Parvien moved to Dhaka, the capital of Bangladesh, and started working at Paris International School as a teacher, where she worked until 1994. After this job, she went to visit her family in Kushtia for Eid al-Fitr, and during that visit, she learned that her marriage had been arranged by her family.

“My brothers fixed my marriage. I had no idea that they were planning my marriage,” she said. “My mom suddenly told me to wear a saree because some guests were coming. This (arranged marriage) was quite common back home. I never wore a saree before; my sister gave me a very pretty Tangail saree and a blouse, and that is what I wore when the groom’s family and friends came to see me. They asked me my name, where I’ve lived, do I pray, and all that. My mom and brother were sitting next to me, as my father had passed away in 1991. The groom’s brother asked to see my hair – I had very long, nice hair, and they were impressed.”

It took a little over a month for the wedding to take place. Two and a half years after she was married to her husband Fareed, Parvien and Fareed immigrated to the United States from Bangladesh in October of 1997 with their son, Rupom, who was just a year and a half old at that time. Fareed’s older brother had sponsored all of his family to come to the U.S., and that is how they immigrated to this country.

Parvien immediately wanted to start working, so she joined a daycare where her sister-in-law was the director at, in Columbia City.

“I definitely had some adjustment problems, like most other immigrants. I had the language problem, and it took me time to learn about this culture, but having my sister-in-law right next to me helped me greatly,” she said.

She says it took a full year to become accustomed to their new Americanized lifestyle. “I also had difficulties with the weather here, and I saw my first snowfall in November of the first year we lived here. Since we only eat Halal food, it was initially difficult adjust to and find food here, but slowly we managed and everything was all right. There was a Cham and Somali mosque here, so my husband was able to attend those. We used to get phone cards to call home.”

Two years after immigrating and working at the daycare, Parvien started working at Goodwill in its customer service department.

“I love everything about working at Goodwill,” she said of her job. “Just like me, people from all over the world, even those that do not speak much English, join here. They take advantage of the education program at Goodwill as well. Goodwill teaches English (ESL), reading, writing, typing and computer skills, and much more. I believe that Goodwill is an amazing place for people like me, which is why people from over 62 countries work here.”

In the future, when Parvien’s children are established, she wishes to go back to Bangladesh and open a blood donation center or blood bank. “I have been a blood donor for a while now, and I often think about how people back home do not even have access to proper blood needed for treatment. There aren’t strong rules surrounding this in many parts of Bangladesh, and it seems as if lots of diseases are also contracted since the donors are not vetted properly…I wish to start this project with my very own family since I know its background.”

Apart from work, Parvien enjoys cooking, decorating her home, exploring her city and spending time with her friends and family. Parvien is a proud mother of two who remain close to their Bangladeshi culture. Her son Rupom is now 24 years old and a graduate from UW-Bothell, and her daughter Ria, is 15. Both of the children speak Bangla fluently, and her son takes part in various cultural programs and events. He is also a musician and taught himself how to play the tabla, which is a pair of East Indian drums.

Speaking the native tongue at home is very important to the family, and something they have kept alive in their own family’s culture. “As a family, we have made it a point to not ever work in the evenings; the evening-time is for family and we always spend time together then, whether it is by watching TV, eating snacks, or whatever it is that we want to do,” said Parvien.

“My mom tried very hard and she always did the most that she could. She bought me my first computer in 2004, and her coworker came to teach me how to use it – that made a big difference in my life,” said Rupom.

Parvien said that she wants to provide everything to her children that she was not able to get for herself. “Since we did not get an American education nor do we have big jobs here, we definitely want our kids to succeed. That is our hope. In our country, maybe they wouldn’t get the same privileges they get here.”

Parvien and her family go to visit Bangladesh as frequently as they can, and they have visited in 2000, 2003, 2005 and 2010. She believes that is the best thing they can do to stay tuned to their culture.