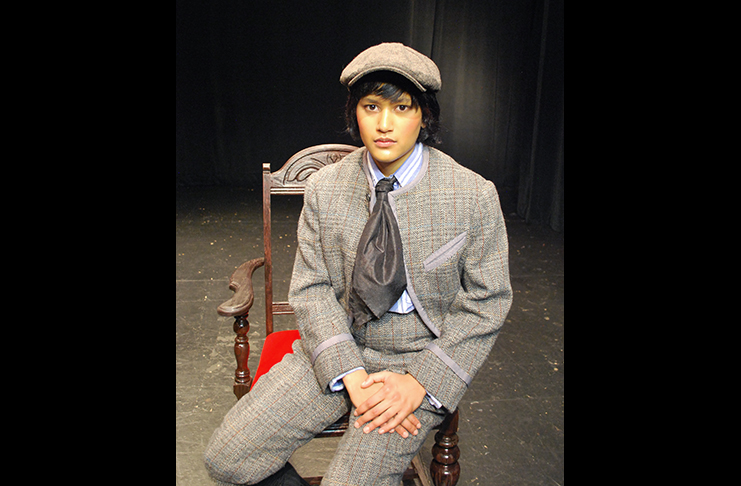 Book-It Repertory Theatre is known for their narrative style of adapting literature for the stage, and next up, the company presents Rachel Atkins’s adaptation of Henry James’s The Turn of the Screw for five actors.

One of those actors is Nabilah Ahmed, who plays the role of the beautiful young Miles, one of two children who is being cared for by a new Governess, but who is also being pursued by haunting specters. “My approach to the role is to explore how a young kid in a deeply repressed society responds to trauma, loss, and isolation,” Ahmed said. “How does he relate to his own suffering?”

Miles may only be 10 years old, but he has already been expelled from school and labeled as wicked – and it’s unclear whether these disciplinary reactions are justified. “How does he learn appropriate boundaries if he doesn’t have a role model there to level with him?” Ahmed said. “How does he then go about asking for the love and connection he deeply needs?”

Ahmed was about Miles’s age when she first became inspired by performance. “I’m Bangladeshi, not Indian, but Bollywood movies are still a big part of the pop cultural fabric,” Ahmed said. “The first one I saw was Kuch Kuch Hota Hai. I was 7 years old and my mom got it on VHS. I was hooked. Shah Rukh Khan is my hero to this day.”

Ahmed is now trying to give depth to a role so much younger than she is herself mostly through on-the-job actor training. “While I loved movies and performing, I didn’t pursue acting in college and had other aspirations, jumping from lawyer to entrepreneur to economist,” she said. “I did take one Shakespeare class. It was extremely helpful, and I constantly apply the skills I learned there about analyzing text and punctuation, especially in a show like The Turn of the Screw, with its dense, Victorian, and often cryptic dialogue.”

Along the way, Ahmed has appreciated the good examples of her fellow theatre artists. “I’ve had the great fortune of having every actor I’ve worked with be far more experienced and far better trained than I am,” she said. “I threw together a resume with mostly entries from high school drama club, took a headshot on my iPhone, and auditioned for an Annex Theater off-night show. That led to another role, which led to another role, and eventually I got to work with Seattle Shakespeare Company and Book-It.”

This current role is immersing Ahmed in what’s known as the “Book-It style.” “Book-It does adaptations of books, but by using every word in the book available, not just the dialogue,” she said. “Different characters will say the words verbatim that they say in the text, and also entire swaths of description and action.”

This presents a combination of narrative storytelling and dramatic action on stage. “For the actor, their task and challenge is to activate everything,” Ahmed said. “All of it must be acted in the first person, even if it’s written in the third.”

But the challenges go beyond the stage, as Ahmed is combining a heavy performance schedule with a full-time job as a museum educator. “I’m working 65-hour weeks between this show and my job, no days off, a minimum of eight hours a day,” she said. “I admire the actors in the community that are able to keep up this kind of a schedule through an entire year of continuous projects, but I’ve realized that it’s not something I can or should do. This is actually my first show back after a year-long break.”

Ahmed finds that preparation is the key to addressing these time constraints. “The script is in process and changing all the time,” she said. “Because of my work schedule, I get less time in the room overall. When I’m there, I need to have done the work to know whatever new words I have to say, know whatever altered blocking we’ve landed on, and with a bunch of ideas to test out in the room.”

With all these components, The Turn of the Screw is proving meaningful in both Ahmed’s personal and professional lives. “I think a lot about trauma in my daily life, because I know so many people who experienced acute trauma in a variety of ways,” she said. “I learn something new on every show I do.”