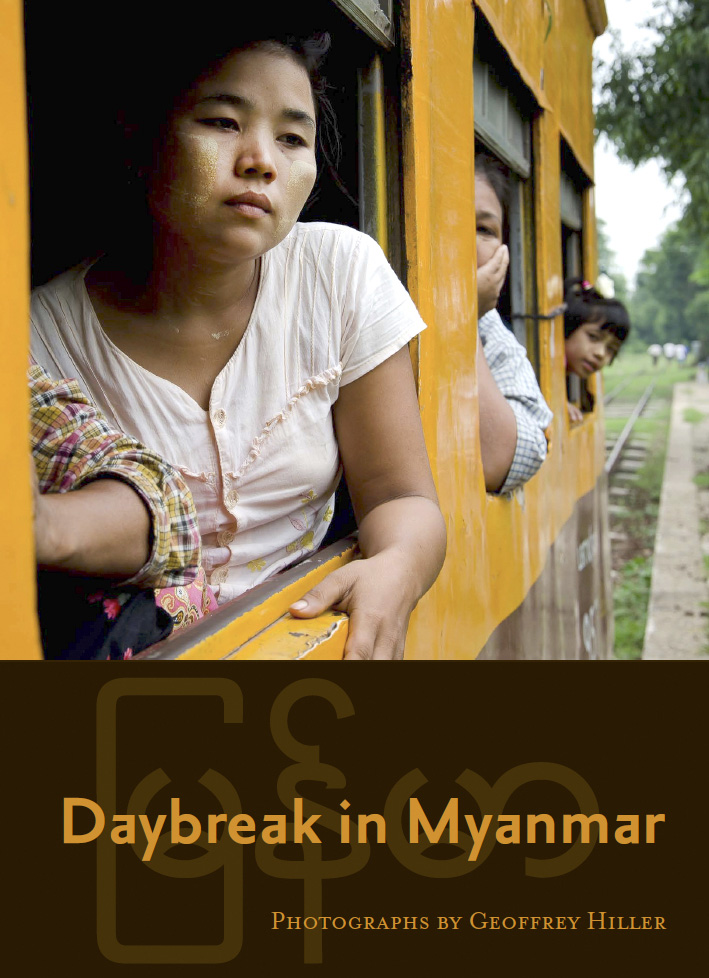 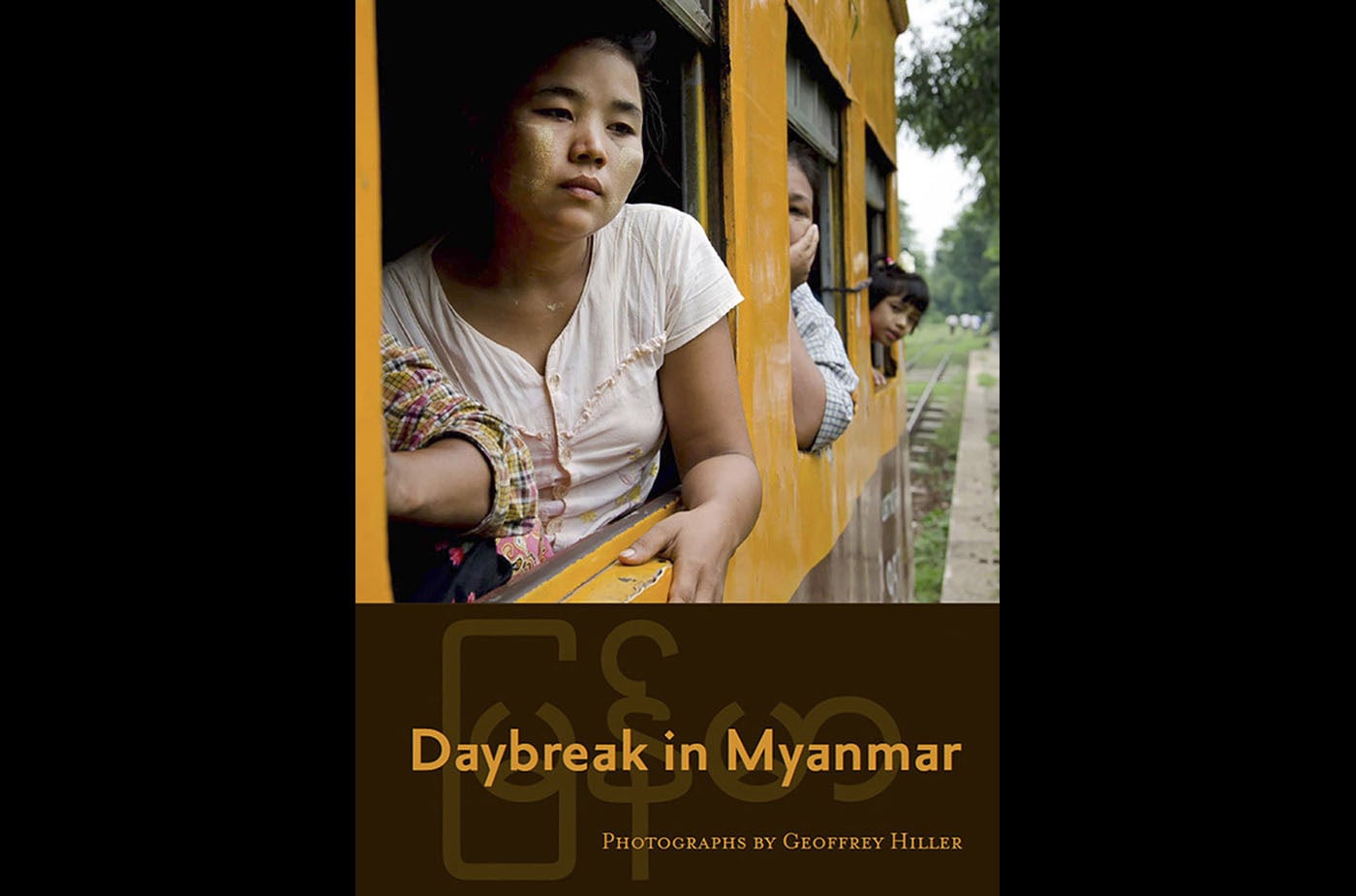 Geoffrey Hiller’s 2014 photo book Daybreak in Myanmar skillfully displays the rich light and colors of the country nicknamed “Golden Land.” The seven sections are devoted to displaying photos from a specific time of day and include interviews with prominent Burmese intellectuals and activists. Hiller chose from tens of thousands of photos taken from eight trips to Myanmar, starting in 1987 until 2013.
“Photography is all about light and the light is very special in Myanmar. Organizing the book around the different times of day was a way to best display the amazing light of Myanmar,” stated Hiller.

The light of the photos complements Hiller’s ability to capture Myanmar’s cultural diversity. Hiller’s photos show how Buddhists and Muslims live side by side in Myanmar’s major cities. This peaceful co-existence contrasts with the well-documented genocide occurring in Myanmar’s northwest. Muslim Rohingya (one of Myanmar’s many ethnic minority groups) have been targeted by Myanmar’s mostly Buddhist military. Hiller, however, never visited the northwest of Myanmar and focused his photography mostly on Myanmar’s larger cities. Hiller expressed some frustration in the way the Western press fails to point out the ways that Muslims and Buddhists do get along in Myanmar. “In the cities different groups exist side by side […] the cities are truly multicultural, multi-religious,” said Hiller. He stressed that while both Myanmar and the United States are diverse, the degree of mixing between different religious and ethnic or racial groups is far greater in Myanmar. In Hiller’s estimation, “in the United States, it is a lot less common that people from different racial or ethnic groups to live side by side and have daily interactions like they do in in Myanmar.”

Despite the level of mixing between Buddhists and Muslims in Myanmar’s cities, Hiller did state that he could sense cultural prejudice on the part of some Buddhists during his visits to Myanmar. He noted that some Buddhists would make comments about how Muslims were troublemakers or other types of off-color comments.

Hiller noted that these comments were often made within the privacy of people’s homes. As such, a casual and less-experienced visitor to Myanmar would possibly not pick up on these tensions. Hiller noted that it was obvious that the government was very pro-Buddhist as shown by its funding of Buddhist pagodas and other Buddhist religious organizations. This openly pro-Buddhist slant he witnessed clearly fits within the narrative of the government’s genocide directed against the Muslim Rohingya.

Hiller’s photos also show the changes in access to consumer goods and telecommunications that have taken place over time. His more recent pictures show people using cell phones which only within the last four to eight years have become cheap enough for most people. Since 2010, Hiller noted that SIM cards went from a few thousand dollars to a few hundred dollars to a few dollars currently. This is in large part due to Myanmar developing a more open and democratic society during that time period. More recent photos also show advertisements for soft drinks and beauty products which is also a reflection of the opening up process. According the Hiller, for much of the time after the end of British colonial rule in the 1948, Western goods like Coca-Cola were unavailable.

Hiller’s book more than anything provides a picture of a country frozen in time yet simultaneously on the verge of great change. The juxtaposition of photos side by side from the late 1980s, early 2000s, and early 2010s allows the viewer to see a country where most people – regardless of the year – dress similarly, walk the same streets, live in the same buildings, and use the same buses and scooters to get around.

In more recent photos the changes are cosmetic and more in the background like the presence of phones and billboards appearing (with notable exceptions like well-dressed expecting mothers in a modern maternity clinic).

It remains to be seen how much the images of Myanmar will change as it continues to open up. Thant Myint U, a Burmese-American scholar of Myanmar’s history interviewed in the book, argues that Myanmar’s largest city Yangon “is at a turning point. It can either become an ungovernable urban sprawl with huge income inequalities and social tensions or one of the most beautiful and livable cities in Asia […] It’s impossible to say right now which way things will go.” He says he wants to avoid “Yangon waking up one day and realizing it has lost a beautiful city.” Hiller noted that in some of the country’s major cities there is a significant amount of modern construction. Because this is a more recent boom, his photos do not document these changes to Myanmar’s cities. In ten years, will Hiller’s book serve as a reminder of a Myanmar that was or one that maintains its traditional character in spite of changes in access to information, goods, and the country’s aesthetics.