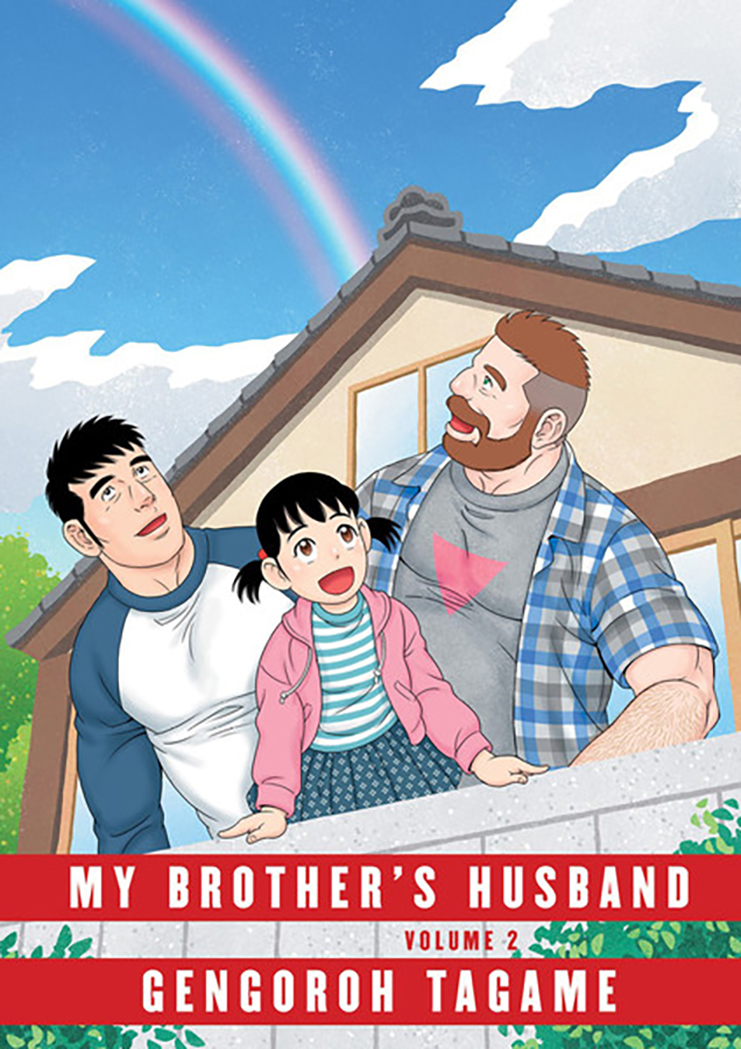 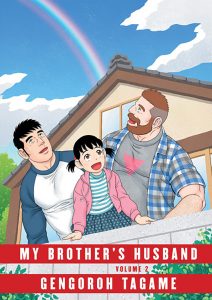 In the follow-up volume to his 2017 award-winning graphic novel My Brother’s Husband, artist and author Gengoroh Tagame expands on a major theme of the first book:  that love and families come in different forms.   My Brother’s Husband (Volume 2) continues the story of Tokyo resident Yaichi Origuchi and his third grade-daughter Kana who develop loving relationships with Mike Flanagan, a burly Canadian who is the titular husband of Yaichi’s late twin brother, Ryoji.

My Brother’s Husband (Volumes 1 and 2) recently won the inaugural Global Literature in Libraries award for young adult books translated into English from other languages.

In the first volume, Yaichi moves from disgust and misunderstanding to acceptance and friendship with his foreign brother-in-law.

The opening of Volume 2 demonstrates how much Yaichi has changed. Yaichi speculates how he would react if Kana ends up falling in love with a woman. He realizes he would accept her, and he’s angered by the prospect of parents rejecting their children because of sexual orientation. That consciousness leads him to the epiphany that his behavior towards Ryoji changed after his brother revealed he was gay.

Tagame conveys the homophobia of Japanese society, not through overt depictions of anti-gay actions, but through subtler means. In one scene, Yaichi shares with his ex-wife Natsuki his curiosity about whether Kana will be a lesbian. He tells Natsuki, “As a father, I want to spare our child as much heartache as possible,” revealing that he fears Kana would face bias if she were gay.

Natsuki, who doesn’t care if Kana ends up loving women or men, tells her former spouse to use his anxiety to “break free from what society thinks.” That’s bold advice in a highly conformist culture that considers homosexuality a taboo.

Despite Natsuki’s open-mindedness and Yaichi’s evolving attitudes, Tagame includes in My Brother’s Husband (Volume 2) reminders that gay people in Japan still fear being open about their sexual orientation: A closeted school friend of Yaichi’s and Ryoji’s can only meet Mike outside his neighborhood because he worries about being seen with a gay foreigner. A young gay student that Yaichi and Mike support in the first book tells his friends that improving his English is the reason he wants to talk with Mike.

At the same time, Tagame offers hope. One of Kana’s friends delights in Mike’s and Ryoji’s relationship, saying, “I think when people love each other and can bet married, it’s a beautiful thing.”

And Yaichi confronts Kana’s closed-minded homeroom teacher about the educator’s discomfort with Kana mentioning her gay uncle. “I see absolutely no reason to stop her from talking about her beloved uncle to her friends,” Yaichi tells the befuddled man.

In My Brother’s Husband Volume 2, readers learn about Ryoji’s life in Canada (which was hinted at in the first book), Ryoji’s regrets, and Mike’s motivation for visiting Japan.

Tagame closes the book with a moving depiction of how deeply Mike is now part of the Origuchi family.  Tagame reminds us of life’s uncertainties, which make strong family relationships – including those that cross continents and societal expectations – all the more meaningful and important.

My Brother’s Husband has recently come out in a new single volume edition that combines both volume 1 and 2 into one book.

One family’s struggle for survival during the Khmer Rouge genocide