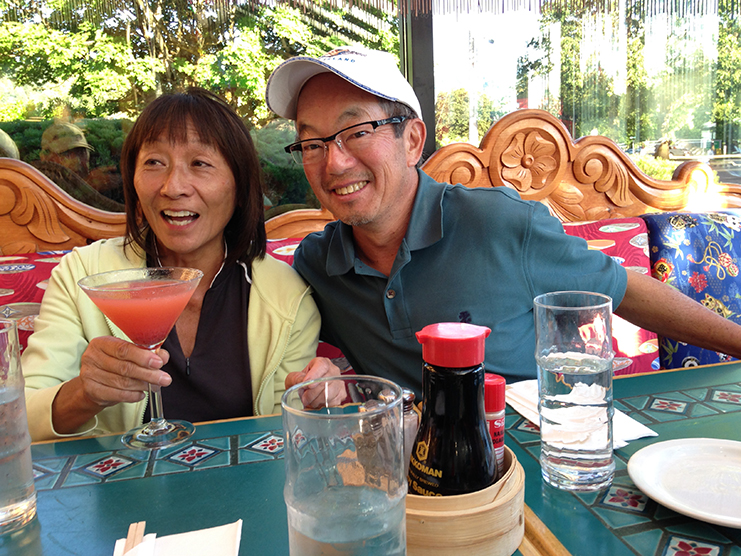 Several years ago, I was at an airport in Washington, D.C., returning from an arts conference, sitting on an awful chair, when I heard some cool jazz music over the sound system. Tapping my foot, I realized that was Deems! I jumped up and yelled, “That’s my brother!” People around me went on their way, as if these wonderful tunes were expected in a national venue.

Deems Akihiko Tsutakawa, musician and community philanthropist, was born in Seattle’s Providence Hospital on January 21, 1952, near the family home at 12th Avenue and Alder Street. He died at home, February 25, 2021, after surviving cancer for several years. He was the son of noted artist George Tsutakawa and Japanese musician Ayame Iwasa. He had two brothers Gerard and Marcus, as well as a sister, myself, and 11 nieces and nephews. He and his wife of 38 years, Jean Yamamoto Tsutakawa, lived in Lakeridge, south of Seattle.

But “surviving” is hardly the word for a professional musician who, despite the weakness caused by cancer treatments, continued to play his delightful smooth jazz for an entire community, a couple generations of followers, Asian, Black, and all others. Starting from the time he learned to play music at Franklin High School, energized by Motown, R & B and funk, he worked with, nurtured, and supported dozens of musicians of all races. His recordings under his own label, J Town Records, reached national airplay. He donated dozens of performances a year for nonprofit organizations’ benefit events and community festivals. And he sometimes called himself “The Wedding Band,” for the hundreds of weddings of every religion and style that he accompanied.

Deems was not only the bridge between races, neighborhoods and musicians, but his ubiquitous music and drive to perform for all good causes was the river of positivity itself.

Noted music and concert producer Terry Morgan said, “It hurts my soul to hear of Deems passing. We have been friends for over 45 years from rehearsals in his basement, to the stage at Benaroya Hall. Deems has been a cultural ambassador to the world, breaking down racial barriers and uniting Seattle and beyond with the spirit and power of his music. His joy and laughter will always be with us.”

Deems loved to tell stories about his notable gigs – the time he played a dinner for the Seattle Supersonics players and they stood around him, towering over his grand piano. His regular gigs at the fancy new Native-owned casinos, the Muckleshoot and Snoqualmie, where he said he got his best pay. Or regular solo piano engagements at El Gaucho, Factoria and Crossroads malls, and the popular lounge at the Westin Bellevue.

Bassist Dan Benson, who played with Deems over a 48-year period, and managed his website, said, “He touched so many lives with his music and shared his love with all he met, always bringing people together for a great time with his unique ‘fonk’.”

In the last 10 years, Deems had a trio with Benson and drummer Steve Banks, or added sax player Gordon Uchima for a quartet. And he also had a larger ensemble, ‘Deems and Side B’ with Benson, Banks, Uchima, Leonard Berman, Michael Baruso, Kevin Boyd and Noel Barnes. At times, Puggy Aspiras and Tim Horiuchi also played with Deems. Steve Banks said, “Deems was such a big part of my life as a fellow musician and as a dear friend, indeed my brother in life, for 31 years.”

“I was a young artist in my 20s when I met Deems and he took me under his wing. Deems introduced me to Standard Jazz songs I never even heard of and gave me an opportunity to sing beyond my years. I performed with him at many venues in Seattle and was introduced to many amazing Seattle musicians. He asked me to share my voice on his Christmas album, ‘My Music Loves Christmas’.”

Readers can check the website www.Deemsmusic.com for links to photo galleries, his schedule of gigs going back to 2007 and some live recordings of performances.

Deems was highly intelligent, curious and a talented chef. He was a good writer with many strong opinions on anything from professional sports to Japanese American customs and family history. He loved Star Trek and talking about outer space. See his website for copies of his many essays published in the North American Post.

Tomoko Moriguchi Matsuno, Deems’ cousin, said, “He was my favorite cousin. I babysat him when he was young and he fought hard because he was sick when he was a baby. He developed a strength despite his size, discovered through the power of music.”

Deems’ brother Gerard said, “Deems was bigger than life, though small in stature; he was a fearless and smart leader. A talented musician and entertainer. Outgoing and generous.”

Added Deems’ younger brother Marcus, “He always was a great showman, putting everything he had into each tune he played, and enjoyed talking with audiences. He loved sports, both playing and watching, and though he started golf later in life, he became super-passionate about it. Like so many things, he studied the heck out of it and became quite a competitive golfer. Deems and wife Jeanie were the most generous and warm hosts, always entertaining at home. And he could carry a conversation with anyone, discussing anything from astrophysics to NBA.”

As recently as December 7, 2020, Deems optimistically wrote to his friends and family members, “FYI – I spent the last few days re-recording all the piano tracks for 10 new songs for the next D & Friends CD. The files will be shared with the Hawaii musicians and they in turn will be working on re-creating all the bass, drum, & guitar parts. At some point in time I’ll get the song files back and redo all the piano tracks moving towards the finished product. Am thankful and excited for the opportunity to make new music to share with you and the public in general!”

And on January 19, one month before his condition worsened considerably, Deems sent the family a letter saying, “I am optimistic. A BIG THANK YOU to all for the overwhelming support during our ordeal, it really means a lot! Also it is obviously a tough situation for Jean as well and I am thankful that she is a strong person.”

From large public audiences to scenes in our own community, Deems’ memory resonates for old pals like Ken Mochizuki, who said, “I first knew who he was at Mercer Jr. High, when community groups played baseball against each other at the Mercer fields. I first got a taste of his talent when he played Santana’s ‘Treat’ with his own small group at the Lion’s Club Pancake Breakfast at Franklin High. When I got to know him personally, then I could say I got to be part of the ‘cool crowd.’ He is our cultural icon.”

Donations in memory of Deems Tsutakawa can be sent to: