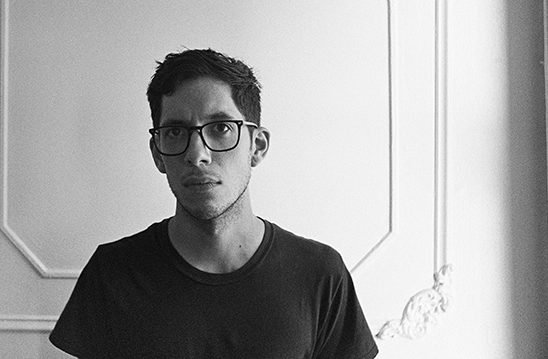 In March, a former Seattleite returns to town with his guitar: Gregg Belisle-Chi will perform with alto saxophonist Tim Berne, together presenting their debut duet album Mars on March 3 at Seattle’s Royal Room, in cooperation with local music service organization Earshot Jazz.

Mars was just released on January 21 on Intakt Records, and Belisle-Chi is currently absorbed in this collaboration. “Working with Tim Berne has also been extremely revelatory,” Belisle-Chi said. “I’ve loved his music for a long time, the energy, the sound, the language.”

The guitarist describes the Mars project as one of his favorite works. “I spent a long time trying to understand how he composed, how he puts music together, so much so that I transcribed an entire solo record of his, just to learn something about how he writes melodies and improvises,” he recounted. “Getting to work so closely with him now, I get to see his process, how his mind works, his decision-making.”

Music has been a part of Belisle-Chi’s life since before he can remember. “One of my earliest exposures to music was watching The Sound of Music at my dad’s house,” he recalled. “I was staying there for a week or so, and I think I watched it every day.”

His earliest musical obsessions were attached to movie soundtracks, musicals and music attached to movement. “Later, when guitar entered into the equation, I was being drawn to whatever was on MTV, when it still showed music videos,” he reported. “My earliest musical training was mostly just me trying to figure out songs at home, watching video tapes of guitarists slowing down Nirvana riffs and mimicking them.”

Formal lessons began in junior high, and Belisle-Chi continued through earning a master’s degree in music. “I think the most important thing I learned in those early years was that the guitar is fun; it’s fun to play, it’s fun to play with others, and it’s fun to figure out new things on the instrument,” he said. “I think that’s something a lot of musicians could remember.”

And Belisle-Chi does, especially when he talks about his collaborations, even beyond those with Tim Berne. “Working with Reid Anderson, of the Bad Plus, has been extremely resonant with me,” he said. “We love a lot of the same music and get excited about a lot of the same things, music or otherwise.”

Belisle-Chi credits Anderson with broadening his thinking. “He’s really opened me up to a process that I think every musician runs up to at some point or another,” Belisle-Chi said, “asking important questions of yourself like ‘Who am I? What am I? What do I want music to sound like that honestly represents those questions?’”

Puzzling out these questions hasn’t always been easy. “I had a teacher who used to say that life as a musician was ‘Chicken one day, feathers the next,’” he remembered. “That turned out to be somewhat true in my early, post-college days.”

And it was especially true when financial concerns were considered. “I was really hustling for gigs, living in a dingy basement here or a crumby studio there, trying to keep my overhead really low so I could spend as much time practicing and playing,” Belisle-Chi said. “At some point I realized that I wasn’t really happy playing the music I was playing, and that I really wanted to focus on my own writing and my own sound, which at the time had profoundly less financial opportunity.”

So for the past decade, Belisle-Chi has supported himself with part-time jobs while signing up for only the gigs that he finds inspiring. “The trouble with that approach is that it’s hard to reconcile those two schedules, that of being an employee somewhere and that of being a musician, especially when you go on the road,” he cautioned. “I also wrestle with the guilt thing of ‘maybe I should truly dedicate all of my time and energy into this, otherwise I’m not a real artist’ or some bullshit, romantic idea like that. But I think that, like anything, it’s just a balance.”

Belisle-Chi worked hard to maintain that balance during the ongoing COVID-19 pandemic over the past two years. “I was extremely fortunate to be able to pivot to doing a lot of remote recording, and staying musically active that way,” he said. “I did a really special recording with Seattle composer and singer-songwriter Ben Marx, San Francisco-based Aaron Schroeder, whom I met in Richland, Washington, where I’m from, Brooklyn-based musicians Nich Mueller, whose band is called Culture in Flames, and Gabe Becker.”

He also diversified his efforts during the lockdown. “I did some notational and copyist work for David Torn, as well as for Nels Cline of Wilco,” he reported. “I was really lucky to be occupied with a lot of different activities, most notably making the solo and duo record I did of Tim’s music.”

Now that venues have reopened, Belisle-Chi’s focus remains less on his solo work and more on his collaborations with Berne. “We have a tour coming up at the end of this month, then some club dates and festivals April through June, plus a European tour formulating in the Fall, with drummer Nasheet Waits,” he said. “Most of my practice and attention is currently on that music.”

He is particularly looking forward to returning to the Puget Sound. “I lived in Seattle for nine years and would say that I have roots there,” he reminisced. “I’ve probably spent more money on coffee at Joe Bar on Capitol Hill than any other coffee establishment in the world. I played quite a bit during my time in Seattle, so I feel like I was somewhat a part of the community.”

But of course, he can’t resist packing his schedule with other projects, too. “I did just finish a record with my collaborative band Good Intentions,” he admitted. “I expect we’ll release it sometime this year, followed by some concerts.”