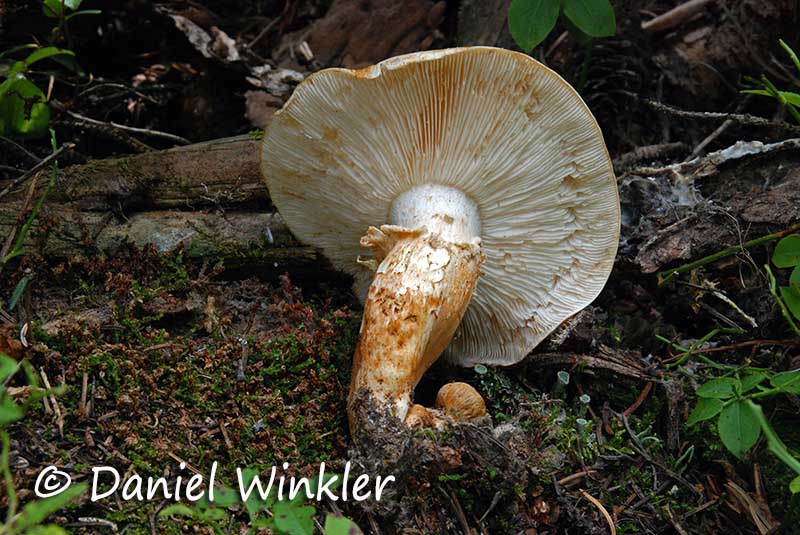 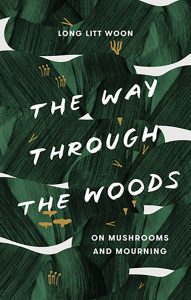 The Way Through the Woods: On Mushrooms and Mourning is Long Litt Woon’s 2018 debut memoire. It has already been translated into 14 languages. Lit alert: Whoa! A runaway autobiography based on fungi?! Wassup?

Hang on to your skepticisms: the plot thickens. Malaysia-born, Long was an exchange student in Norway when she met, married, then lost her Norwegian partner of 32 years. Now a social anthropologist residing in Oslo, she recounts the story of how she was left by the man she loved who one day rode off on his bicycle on his way to work . . . and due to his unexpected, sudden death, never returned. Mourning, however, did not become Electra, instead it morphed into a modern day Norwegian semi-tragedy. Alone and grieving, Long found comfort in taking a course on mushrooms at the University of Oslo Natural History Museum — a plan the couple had talked about, but had never carried through out.

This curious, engaging 291-page book by the now certified Norwegian Mycological Association mushroom expert greets the reader with a warning: “. . . this book is not intended to serve as a field guide or resource for identifying mushrooms and/or distinguishing edible from poisonous varieties, and should not be used or relied upon for such purposes.”

The Way Through the Woods is a contrapuntal two-fer. It’s a metaphoric tale of the author’s studies and explorations related to mushrooms and, ultimately, about how the process helped reconstruct her life, work through her grief, and reclaim her enthusiasm for living. “If anyone had told me,” she wrote, “that mushrooms would be my lifeline, the thing that would help me (get) back on life’s track, I would have rolled my eyes. What had mushrooms to do with mourning?” The book’s pretext and context are conceptualized through her two-fold journey of exploration and discovery.

Candid, unaffected and introspective, Long’s engaging, intelligent writing style is tinged with humor that effortlessly draws the reader willingly into her dual worlds in search of “hows”: How did this happen? How did she cope? How will it end? The book is a pilgrim’s progress adventure that one can imagine on a large screen in a darkened theatre clutching a jumbo bag of popcorn. Her story has all the hallmarks of a Hollywood weeper: girl meets boy; girl loses boy; girl triumphs over loss; happy ending. Pass the Kleenex.

The book’s Table of Contents is a fine-tuned “gotcha” with its attention grabbing, wink of an eye chapter titles that lure you into the novel: Widow with a Small “w”; Mad at the Grass; Fifty Shades of Poison; Hipster Morels; The Unmentionable; Incitement to Mass Psychedelia?; Mushroom “Bacon”; Idiot’s Guide to Mushroom Latin; The Mushroom Code. A quick and easy read, Long writes in clear, uncomplicated, accessible sentences: “I was in free fall, I, who had always been in command and in control; I, who liked to have a firm grip on things. My lodestar was gone. I found myself in unknown territory, a reluctant wanderer in a strange land.”

An auto-bio starring mushrooms, the author relays the simple rule of thumb proscribed in class by her instructors. She writes, “. . . we novices were admonished to avoid any wild mushrooms that were entirely white or entirely brown on the cap, the underside, and the stem. . . . We were told that there was no easy way of knowing whether a mushroom was poisonous or not. Mushrooms simply have to be learned, one by one. Period. Our teachers were very clear on this point.” Mushroomers, take note. Matsutake lovers, pay particular attention.

The book devotes a number of pages to the Matsutake (pine) mushroom. The legendary Asian affinity for the highly esteemed Matsutake (Tricholoma matsutake) derives from its popular use in the cultural cuisines of Japan, Korea and Chinese communities. While the western world may have likened the mushroom’s smell to “dirty socks”, the Japanese dubbed its fragrance “divine”. Given the extreme contrast of opinions, for years it was thought that perhaps there were two different Matsutake mushrooms: the Ticholoma nauseosum of Norway, and the Tricholoma matsutake of Japan. In 1999, following decades of debate, it was determined that both were actually the same species. Scientific custom intervened and dictated that because the Norwegians were the first to describe the mushroom, they had the right to name its species. After a much heated campaign, Japanese lobbyists finally won the right to call the mushroom T. matsutake, its scientific name used throughout the world today.

The autumn season for mushrooming by Asians (and others) in the Pacific Northwest is now at its peak. Considered a special delicacy, Matsutake is among the most difficult of mushrooms to cultivate or harvest in the wild. Families and friends, market suppliers and black marketeers can be found at this time foraging in earnest through closely guarded secret places in local forests, digging furtively through the mossy soil beneath conifer trees for the elusive, highly prized fungi. But beware, a meal of the poisonous look-alike – the Amanitus smithiana – may end not with a delicious dessert, but a tragedy caused by a blundering error in judgment.

Matsutake, depending on size and condition, have an incredibly broad range in price. According to the American Mushroom Institute, Matsutake is the third most expensive edible mushroom in the world, after Yartsa Gunbu and European White Truffles (a type of fungi). Top Matsutake specimen can command a whopping $1,000 to $2,000 per pound.

Gratefully, local Matsutake can be purchased for far less. A sampling of their costs in the Emerald City runs from over $72 lb. (at a well-known Seattle Asian grocery and gift market) to nearly $200 lb. (at local regional outlets of a multinational retail corporation).

For anyone curious about mushrooms, but who prefer a learning experience minus the hard science folderol of a textbook, Long’s novel can be an enlightening initiation to the topic – one that will not only engage, but provide substantive lessons for beginners. For those who have mourned a loss, the book can be a compassionate guide, moving one through difficult times.

But The Way Through the Woods is not just a treatise on mushrooms and mourning. It’s a fairly deep well, brimming with a polyglot of little-bits-of-this and little-bits-of-that: a cultural peek-a-boo at Norway and Norwegians; insights into travels outside comfort zones; tempting recipes; wise reckonings and realizations; humble pie learnings. The 14 translations of the book, already in print, speak volumes for the regard the world has given Long’s novel. A strong recommendation, indeed, for the merits of this book.