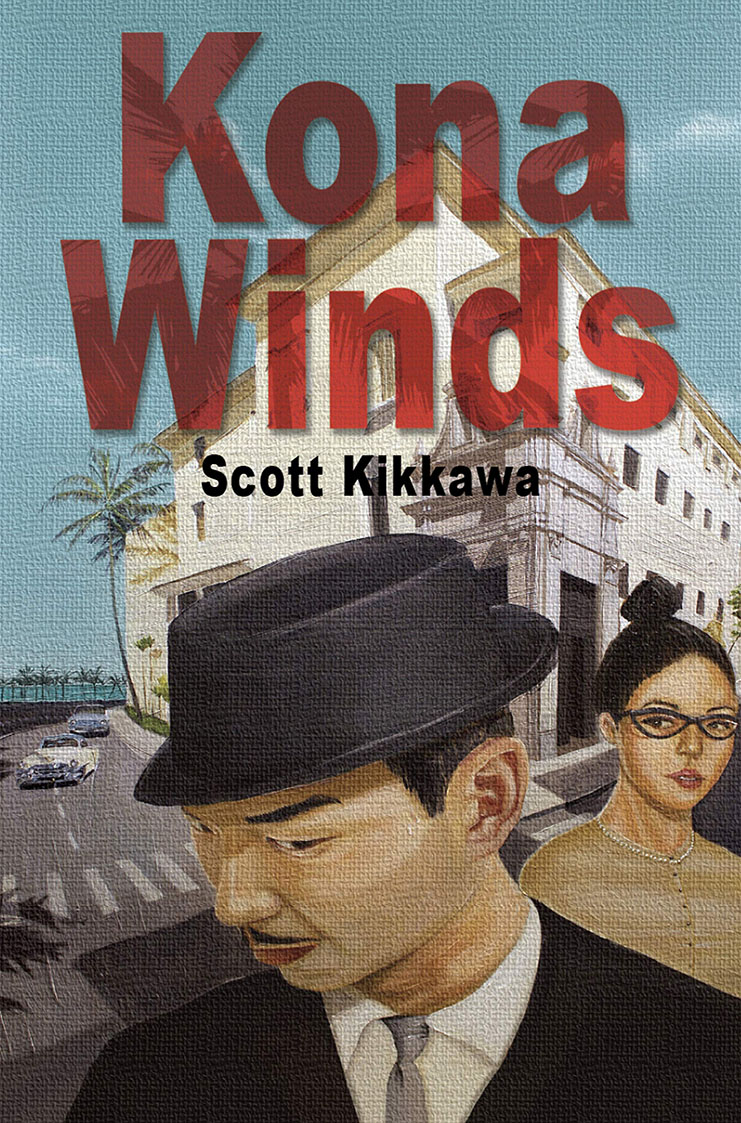 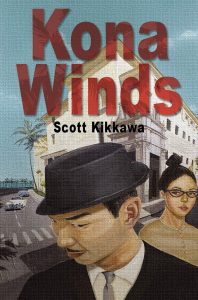 In the neighborhood where I live in Hawai`i, Sears & Roebuck is gone, replaced by a multiethnic Asian food court and beer garden, but there still is a Long’s Drugs because only in Hawai`i did they keep the name instead of changing to CVS. And on the corner is a rusted neon Coca Cola sign that also says “fountain” and “saimen” — a silent beacon to the past. In this neighborhood (and others nearby), author Scott Kikkawa goes back in time to the 1950s and offers an engaging murder mystery titled Kona Winds.

The main character is a Hawai`i born and raised Japanese American, Frances Hideyuki Yoshikawa. “Frankie” is also called “Sheik” because “Yoshikawa” is too hard to say. This why so many Japanese Americans of his age are called “George, Ike, Harry” etc. Frankie is a hard drinking, chain smoking, cynical, smart, street wise homicide detective in the Honolulu Police Department.

Frankie is also a World War II veteran having served in the renown 442nd Army Division 100th Battalion. After the War, in an effort to escape the trappings of his provincial working class neighborhood Kaka’ako, Frankie went to Columbia on his G.I. Bill studying the classics. “There I traded tales of Momotaro and Chushingura for Dante, Chaucer, Shakespeare, Milton. If I wax poetic it’s only because the only good my course of study ever did me was put all those dead bodies and dead feelings into context.”

Frankie likens his life in Kaka’ako as a journey though Dante’s “Divine Comedy” in which he spends most of his time navigating the labyrinths of “Inferno” with musings about the ambiguities and ironies of “Purgatorio” and catching fleeting glimpses of the peaceful fields of “Paradiso”. Frankie is not bitter but certainly harbors resentment about the imbalance and injustices in life.

Frankie’s boss “Gid Hanohano” (his last name means “honorable” in Hawaiian) is an older, wiser, large, slightly stereotyped Hawaiian man who occasionally spouts sayings in Hawaiian:“Maka`ala Ke kanaka kasha manu — A man who calls birds should always be alert.” Hanohano provides an interesting counter point to the rich, privileged, old money Caucasian families who ripped off the original Hawaiians and still oversee much of Hawai`i today. The other detectives in Frankie’s office are also Caucasian but portray different strains of working class newcomers to Hawai`i.

Early on, the reader must come to terms with Frankie often launching into “detective speak” an adjective-laden description with detail overload delivered in a monotone Joe Friday drone.

He describes the dead body that starts off the murder mystery: “The bloated face looking like a round loaf of pao dolce, the puffy panned bread from the new Portuguese bakery in Kapahulu, but a lot less appetizing… The whole body was a sickening mess like soggy saloon pilot crackers from Hilo Macaroni Factory the kind that came inside a giant tin.”

Often these descriptions hold historical or cultural tidbits that not only remind the reader that this detective story not only takes place in different time and place, it also elevates your experience of Hawai`i as a culture within a culture. For those familiar with Honolulu, the references to places and things of a generation ago will ring true and often with appreciation for what is almost gone now.

“The sun had started to sink and set fire to clouds as thick as mayonnaise in an okazuya tuna sandwich.” Some might say that all the slushy adjectives and long sentences are a bit much. But I enjoyed the excess and I think it fits into the stylistic detective genre of 1950s.

It turns out the dead body is Millie Miyazaki, a girl from high school Frankie kissed when he snuck in through her bedroom window. That back story stirs up evocative themes of coming of age, the blindness of lust, trying to impress people we don’t even like, the venom of regret and the like.

Ellen Park is a Korean American reporter of a small independent newspaper and becomes Frankie’s love interest. When Frankie seems reluctant to disrupt the status quo in his investigation, she chastises his cynicism: “We matter. If you don’t catch the killer of an oriental girl and bring him to justice you’ll be telling the world she mattered. That WE matter. That my brother and boys like him [soldiers who died in WWII and Korean War] matter and their lives aren’t any cheaper than those haoles whose money bought them a way out. Show them we all matter Frankie. Show them they can’t sweep Millie Miyazaki under the rug. Or you.”

Across this prejudiced, paternalistic and multi-cultural landscape of post WWII Hawai`i, many questions are raised: What makes us succumb to the lowest common denominator? Are the victims of selfish materialism complicit? Does the individual determine the depth and scope of the wounds of war? Would you kill for love? These and other questions are left partially unanswered. The reader can ponder and venture an answer or walk away to one’s choice of elusion.

Nearing the end, Frankie offers this exhortation: “Sometimes the world shits on you and all you can do is grin and bear it. Especially when you’re doing what’s right… (but) as long as you’re on the straight and narrow it’s possible. Keep your eye on the ball. Be good.”

Maybe for Frankie, Scott Kikkawa and for us it’s the best view of Paradiso and the best shot we get.