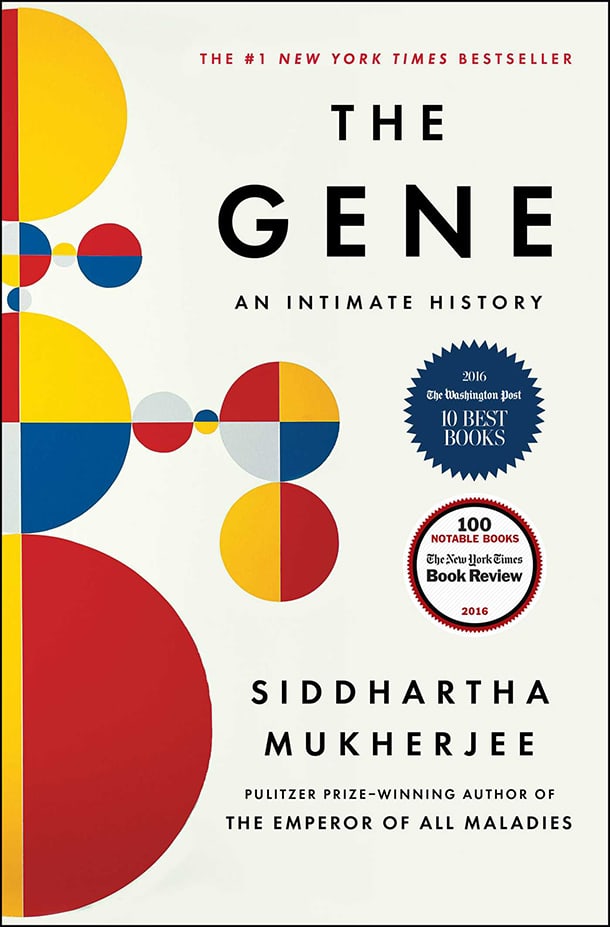 Siddhartha Mukherjee’s The Gene: An Intimate History is a massive tome at nearly 600 pages and yet an eminently readable and informative book. Mukherjee’s history of the gene, genetics, heredity, and the scientific quest to answer vexing questions has been a much anticipated book. It doesn’t disappoint. For Mukherjee, the award winning author of The Emperor of All Maladies, this  history is deeply tied to a family history of schizophrenia and bipolar disorder. And like many of us who have family histories of devastating illnesses, he wonders how these are passed on through the generations. Thus begins his quest to understand how scientists and thinkers from Aristotle and Pythagoras to Mendel, Darwin, Watson, Crick, Venter and a plethora of other scientists have explored this question and contributed to that body of scientific knowledge that we broadly call genetics.

His history of the gene is interspersed with poignant and candid portraits of how mental illness impacted his family. We learn about his uncles and cousin and their bouts with mania and depression, of his grandmother’s fierce protection and care of her children, and the anguish of the author as he wonders what the future holds for him and his children. This is not just a story about illness as it may be passed on; it is also an exploration of how we arrived at the point where we are today in this quest. Many questions have been answered such as what is the structure of a gene or how to map the human genome. We know what particular genes have mutations that cause sickle cell anemia or breast cancer, and we have stories about cures and tests for conditions like hemophilia or cystic fibrosis. Mukherjee’s gripping narrative is the story of these scientific discoveries made by curious intellectuals through a combination of dogged work, intuition, and luck.

There are also stories of spectacular failures such as the death of Jesse Gelsinger who received gene therapy for OTC, a rare condition that affects protein breakdown and leaves devastating amounts of ammonia in the body. Mukherjee probes the sordid history of eugenics which reached its apex in Nazi Germany, and he continuously explores the ethics of these scientific discoveries. What does it mean for us to be able to manipulate genes to create three parent children or when does our quest for ultimate frontiers in genetic engineering lead to ethical challenges? How do governments and scientific communities regulate genetic research and why? These are major questions that Mukherjee raises and presents from a historical perspective.

The book leaves us with more questions than answers—will there be a day when we can treat illnesses like schizophrenia that involve many genes? Will there be therapies that mitigate or cure devastating conditions? He seems optimistic but this book does leave open questions for us such as how much do such therapies cost and what does that  mean for those who do not have access to such treatment? Will our insurance policies be able to cover these costs assuming that we have coverage? Most of this history is focused on the advancements made in Europe and the United States with their vast investments in scientific research, but what will this mean for the poor across the globe for whom such advances mean little when costs are high and there are more pressing health concerns like potable water and sanitation.

Mukherjee takes a very dense and complex subject and manages an engaging narrative while also explaining scientific principles and concepts for the lay reader—no easy task. And, he does not overwhelm the reader with footnotes—quite an achievement for such a book. This book is a must read for anyone who wants to be better informed about genetics and a field that is changing healthcare rapidly.