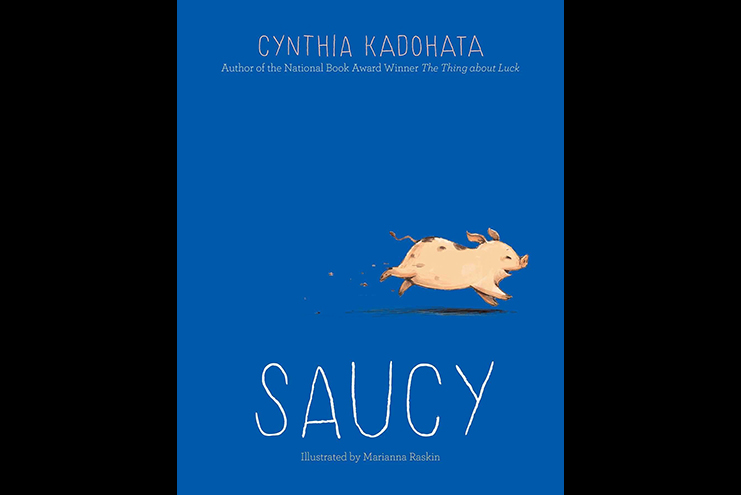 Cynthia Kadohata, author of the National Book Award winner The Thing About Luck, continues to give voice to Asian American women, this time through the lens of 11-year-old Becca, in her latest novel Saucy. On the surface, the storyline follows the young protagonist raising a baby piglet and seems like a perfect light read, but woven throughout are threads that expose a young reader’s mind to experiences often not found in mainstream literature. From the Asian American experience in the Midwest, to the reality of having a sibling who’s disabled, Kadohata smoothly incorporates a diversity of experiences that are wonderfully normal to young Becca.

Readers are first introduced to Becca through her first person lens of her family members (which she has many of as a quadruplet living in a multi-generational household). Soon after, she finds Saucy, the abandoned piglet, and vows to raise her. Yet it’s immediately disclosed that Saucy will eventually grow too large to live in their household and must be moved to a pig sanctuary. In the next few weeks, Becca has to contend with raising this pet that she loves dearly all the while knowing that their time together is rapidly dwindling.

As Becca starts taking care of Saucy, it’s impossible for both readers and the rest of the family to avoid falling in love with Saucy. Kadohata gives so much character to this precocious pig and the illustrations of Saucy’s wit and occasional destruction fit lovingly. The fact that readers are aware of the inevitable separation only makes Saucy’s time with Becca and the rest of the family sweeter.

Outside of this main plot, Kadohata skillfully shines light on parts of the Japanese American experience during WWII, noting how Becca’s great-grandmother moved to Ohio to help with the war effort in a canning factory. Kadohata also incorporates the reality of a middle class family and their economic concerns. Becca is constantly aware of the monetary pressure their family faces and it illuminates the reality of growing up in a middle class family in our current era. To top it off further, Kadohata touches on the horrors of factory farming and the power of youth community activism in the final arc of the novel.

Surprisingly, none of these additional elements feel out of place. For example, Kadohata’s mention of Becca’s great grandmother is a respectful homage to the Japanese American experience, yet is done smoothly without more attention than is necessary. Kadohata skillfully leverages Becca’s first person view to normalize these experiences as part of the breadth of what growing up in America can look like in this generation.

Despite some of the aforementioned realities that Kadohata illuminates, she chooses to avoid any negative consequences playing out in Becca’s life beyond giving up Saucy. The novel wraps up relatively neatly in a happy ending, and none of the financial worries that Becca has in the course of raising Saucy lead to any significant consequence.

Ultimately, Becca’s story includes many key coming of age moments such as learning to let go of the things that you love, and realizing you’re enough just the way you are. However, Kadohata manages to do so while also adding to the diversity of voices and stories in children’s literature — a feat that she’s proven capable of once again.