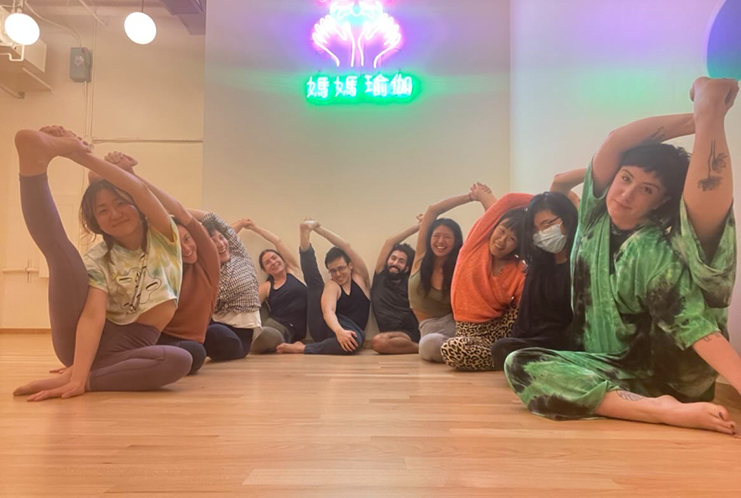 On October 24th, a small Yoga studio in the heart of Seattle’s Chinatown-International District will mark one year since opening its doors during a time of uncertainty. But for Nancy Nomellini, the owner of “Mother Yoga”, she said that day, in a way, was meant to happen.

“It was a really precarious time because of the pandemic and I never saw myself as a business owner,” said Nomellini. “But somehow things just came together in a really crazy way, and it was because of a community that wants to see this place be part of this neighborhood”.

Nomellini, who had to pivot to teach Yoga through online classes during the pandemic, said it was one of her students who gave her that nudge to open her own studio. And it was around that same time that her husband heard from a tattoo artist in the CID that a space where Mother Yoga stands now was available for lease. It’s located in the historic Louisa Hotel on the 500 Block of Maynard Alley.

“At the time, I found out it was going to take about $40,000 to do a complete build out of the space. And my head just blew off! I mean, how was I going to be able to afford this?”

But Nomellini said the community showed up to make it happen. Her friend helped set up a GoFundMe account that eventually raised some $25,000 for the studio. Others stepped in to do everything from painting the windows to laying down tiles”.

“Everything was a labor of love,” said Nomellini. “When I first saw the space, I thought this could never work. It’s too small and with the pandemic, who knows if people would show up. But my husband told me to just do it and then see who comes”.

When the doors opened last fall, people slowly started coming. One of them was Joseph Shoji Lachman, who lives in the neighborhood and heard about the studio from a friend.

“I live in the CID and I came to check out Mother Yoga a few weeks after it opened. Now I come like 4 to 5 days a week,” said Lachman. “What makes this studio different from other Yoga places is that there’s really a strong sense of community and compassion here. It’s not just about a workout or exercise. It’s a group of people really excited to spend time with each other”.

Lachman also said that Nomellini was a big part of why he became a regular. He said the fact that this studio operates on a sliding scale ($10 – $25) really speaks to why he loves this place.

“Nancy is really trying to make this place affordable and accessible to everyone,” said Lachman. “She has put her heart and soul into making this studio work. And you can really feel that every time you step inside.”

According to Nomellini, Mother Yoga is the first community based, sliding scale Yoga studio to open in the Chinatown-International District. The number of instructors has grown from 4 to about 15 in the last year and the studio offers classes for students of all Yoga levels.

“It all happened organically and I have been pleasantly surprised by the diversity of the people who come to see us everyday,” said Nomellini. “In the beginning I never announced that this was a POC owned studio or anything like that, but I really believe it’s because Yoga is an invitation for everyone who is curious about the practice, no matter your background”.

As Mother Yoga celebrates its one year anniversary , Nomellini said she still sees “Mother” Yoga as a “baby” still trying to find its footing, especially financially. She said her goal is to continue growing and offering more workshops and programs, including a Yoga retreat where she will get to take a group of students to India next Spring.

“Yoga isn’t for everyone but for certain people, it has changed their lives,” said Nomellini. “I have made so many friends who have changed my life through practicing and being part of this community. We built this place together and we will keep growing together here in the Chinatown ID”.