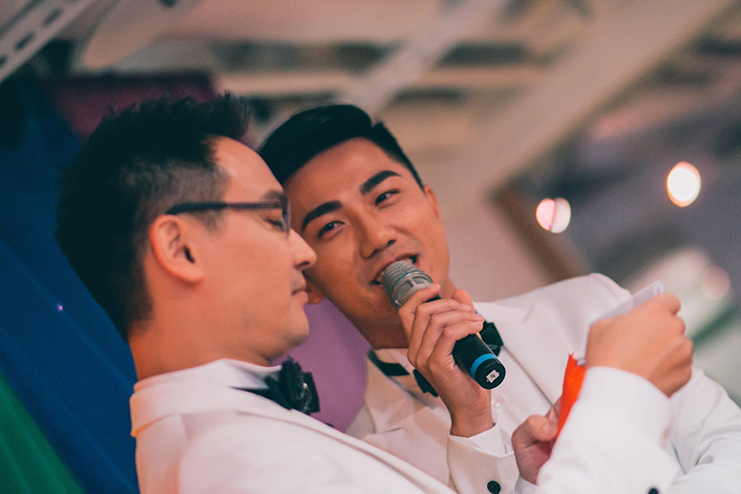 Tsou Tzung Han is a Taiwanese journalist of the German government-funded public international broadcaster Deutsche Welle (DW) Taipei office and a frontrunner in Taiwan in pushing for LGBTQI+ equal rights. Besides being a seasoned reporter, Tsou wears many hats. He is Taiwan’s first openly married gay TV celebrity and a human rights defender. He launched a successful Pride parade at his socially conservative hometown Miaoli County, which was called “Miaoli Love Wins (苗栗愛轉來)” in 2019. Before then, he set up a LGBTQI+-friendly Facebook page, followed by almost 10,000 followers, aimed to advocate gender equality and engage with LGBTQI+ community members and supporters. This year, he becomes a board member of a LGBT coalition group called Equal Love Taiwan (彩虹平權大平台)” to mainly focus on fundraising and attend all kinds of events to support LGBTQI+ rights.

Before LGBTQI+ people made significant legal and political gains in Taiwan, Tsou looked back at the time before he came out and described himself as being “dismal, not knowing where the future is and being restless deep in his heart.” He added, “I am incomplete because I have to lie not just to strangers, but to my beloved family everyday.” After the same-sex marriage law took effect, Tsou said the biggest difference he felt was that he became “a complete human being, without fighting against others since childhood, telling lies or pretending to be another person. If people can’t be themselves, they won’t be able to settle down,” Tsou said.

“Treat family members with lots of gentleness and kindness”,Tsou said when asked about coming out to one’s family and also about when other family members come out to you. “There’s a saying that goes ‘You’re out to your families bluntly by putting them in the closet instead,’ because they don’t know how to respond.” Tsou said he respected whether or not his parents and parents-in-law would tell their relatives and friends of him coming out or not.

Tsou’s overseas school exchange to the University of British Columbia, Vancouver BC, in 2005 encouraged him to speak out about his sexuality. He took a course at UBC called “Critical Thinking on Sexuality.” It was instructed by two teachers who were both lesbians. Tsou was surprised many of his classmates did not shy away from their sexual orientations, instead being open about who they were, starting a sentence like, “Yeah, I’m gay but…” As an exchange student from Asia, he said he was shocked yet discovered the possibility and freedom of being true to himself. Tsou also found the class reading classic gay literature like Leslie Feinberg’s “Stone Butch Blues” empowering. Before he went to Canada, he’d claimed being bisexual so to as he put it, “maintain a certain degree of masculinity and interests in women.” However, after he returned to Taiwan, he shed that label and embraced his gay identity.

Experiencing both Western and Eastern culture, Tsou continues to pay close attention to progress in the LGBTQI+ community in the West. “‘Globalization is for localization,’” Tsou said, quoting an ancient Chinese saying. He explained, “Without local identity, we will lose ourselves in the learning process, yet if without external cultural stimulus, we won’t be able to stay connected to the world.” Addressing the example of Poland’s decision on setting 30 LGBT-free zones in August 2019, Tsou suggested that Taiwanese should learn from the experiences of the Western LGBTQI+ community and reflect on Taiwan’s current situation.

While actively standing at the frontline and talking about social movements, Tsou noted the importance of sharing topics like marriage life to raise more public awareness.  “We both go to work and have dinner at home together after we get off work. Sitting at the dining table eating becomes the time we share our daily lives,” he said. Yet, he admitted,  ”My husband doesn’t like it when I discuss our marriage. He wants to keep his privacy.” The couple communicated and agreed to set boundaries on what to share publicly after Kevin understood reasons for Tsou to share their life. “It wasn’t for my own fame. I want to keep being present and become a driving force,” he said about continuing to be an activist for those struggling silently with their sexual orientation.

In Taiwan, heterosexual marriage is most likely an unequal institution framed by long-existing patriarchal views. Women are expected to take good care of their husbands, do house chores, raise childrens while being a working mom. “This type of traditional expectation doesn’t exist in our marriage,” Tsou said, “My partner is an organized person. Every month, we spend one weekend with his family, one weekend with mine, another weekend we’d stay in Taipei, and we go back to our family separately for the other weekend. The most important thing we both agree on is to divide our time and chores fair and square,” he said.

Taiwan on May 24th marked the first anniversary of same-sex marriage legalization, yet Tsou believes there’s room for improvement. Tsou suggested that limitations on transnational same-sex marriages should be lifted, and the government should amend the adoption law to be more friendly towards LGBTQI+ community. “We all need to make efforts,” Tsou said.

As the world is weathering impacts from COVID-19, LGBTQI+ people may face violence due to stay-at-home restrictions if they’re under the same roof with unaccepting families (although Taiwan is not affected as seriously as other parts of the world by the pandemic because of the government’s precautionary measures). “What people could do now is to be more courageous by doing things within their own capacity,” Tsou said. “Show up whenever you can. Both monetary and volunteer support can be crucial.”

For the future, Tsou said that he would love to have children, and he will never stop promoting  gender equality.