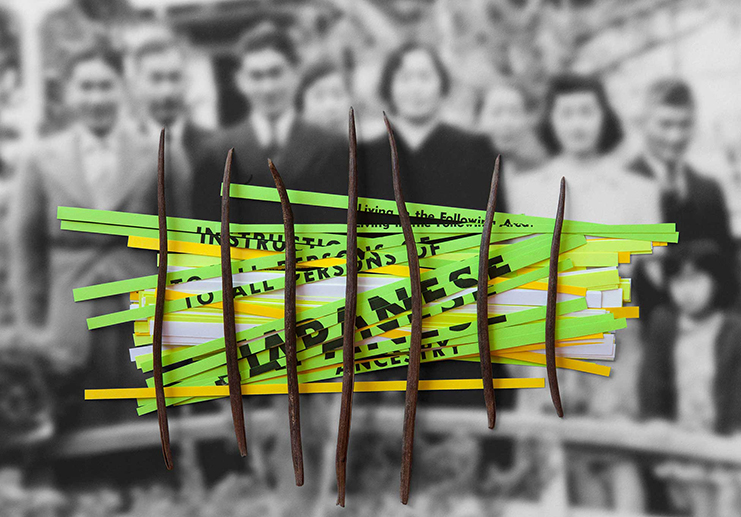 The incarceration of Japanese Americans during World War II is a dark episode in U.S. history. Two months after the bombing of Pearl Harbor, President Franklin Roosevelt issued Executive Order 9066, forcing 120,000 Japanese Americans from West Coast states into concentration camps, without trial or evidence of any crime. Most were immigrants (Issei) and their American-born children (Nisei). After the war, they were notoriously reluctant to talk about the incarceration, dismissing it as gaman, the duty to bear the unbearable.

Although few Sansei (third generation) are old enough to have experienced the camps in person, they share the weight of those memories. They coaxed out their parents’ and grandparents’ stories and led the campaign for justice. Shadows from the Past: Sansei Artists and the American Concentration Camps, currently on view at the Monterey Museum of Art, presents the work of eight Sansei artists that bear witness to those memories. The incarceration is an important theme in their work, but for most, it is a memory passed down by family members, mediated but also intensified by the passage of time. They are motivated to tell these stories of injustice and displacement by a desire to prevent their recurrence.

Some of the artists take a narrative approach, using photographs and artifacts to tell stories. A cache of family photographs taken in the Jerome, Arkansas concentration camp awakened Jerry Takigawa to the feelings of shame and loss his family suffered during their incarceration. It galvanized him to create Balancing Cultures, a series of photo montages layering artifacts and documents with the pictures from camp.

Other works are more symbolic or allegorical. Tom Nakashima’s densely textured paintings contain literal and abstract references: images of guard towers and cages set in desolate landscapes refer to the incarceration of Japanese Americans as well as more recent detentions of Muslims and Latin American immigrants.

Masako Takahashi is the only artist in the exhibition who spent time in a camp.

“I never forget I was born in a concentration camp — in the USA, for being of Japanese ancestry. My personal experiences are filtered through the making of artwork,” she states. She uses her own hair to embroider on cloth, creating abstractions of Japanese textiles. “Generations” is a series of black silk kimono with what look from a distance like mon, circular crests that identified clans in feudal Japan, to evoke family and heritage in the present. For her ongoing project, “Journal/Diario,” lines that look like text are embroidered on long rolls of kimono cloth. But the marks are illegible, their story left to the imagination.

While recording oral histories of the incarceration, Reiko Fujii collected photographs of the interviewees in camp. Those photos appear in her documentary film, Detained Alien Enemy (2017) and in two artworks in this show. For “Detained Alien Enemy Glass Kimono” (2016), she fused over 200 of the images onto small glass panels joined with copper wire to make a kimono. When the wearer moves, the kimono makes sounds like the wind chimes used to call ancestors during the Obon festival. In “Detained Alien Enemy Illuminated” (2016), the images are fused to glass jars which both trap and magnify them. The jars are behind an old window, its panes stenciled with postcards and letters to people in camp, their only connection to the world beyond the barbed wire.

Lucien Kobo’s mother was sent to the Topaz, Utah concentration camp while her father was in a high security Federal prison in Bismarck, North Dakota. His position as treasurer of a Japanese community organization made him a dangerous enemy alien in the eyes of the U.S. government. Kobo’s assemblages are very personal, combining her mother’s letters to her father with family photos, documents, and found objects from camp sites. Her collage, “Never Again is Now” (2009) layers these artifacts with images of present-day deportation and detention centers targeting Muslim and Latino/Mexican migrants.

Na Omi Judy Shintani’s father and his family farmed oysters in Puget Sound before being removed to the Tule Lake concentration camp. “Ancestor Chimes” (2012) is a mobile of oyster shells suspended from a bundle of driftwood, the shells inscribed with family stories in ink intended to fade with time. “Pledge Allegiance” (2014) is an American flag constructed of wood that Shintani and her father gathered from the ruins of the Tule Lake barracks.

Wendy Maruyama is a woodworker whose practice has evolved from making objects to social justice. Her mother’s family was living in California when EO 9066 was issued, but rather than go into a camp, they fled the exclusion zone. Maruyama describes them as “invisible incarcerees” who suffered displacement and discrimination outside the camps. The cabinet-like constructions of Maruyama’s Executive Order 9066 Series house artifacts, photographic images and documents behind sliding doors, so that not everything can be seen at the same time. “A Question of Loyalty” (2010) juxtaposes images of stark camp landscapes with text from the notorious loyalty questionnaire given to all incarcerees. Her room-size installation, “The Tag Project” is made up of 120,000 paper identification tags, replicas of the ones issued to Japanese Americans as they were taken into custody, suspended in ten floor-to-ceiling bundles representing the ten camps.

Lydia Nakashima Degarrod’s story is one of displacement. Living in Peru at the start of World War II, her father was threatened with deportation to a U.S. concentration camp. Instead, he fled to Chile where she was raised. For “Mending the Past” (2019), she gathered historical portraits of the Japanese in South America, printing them on handmade paper of Japanese mulberry and the Latin American medicinal herb, Yerba Buena. They are stitched together using the Japanese boro technique for mending fabric, a metaphor for reuniting and healing those displaced from their homes and countries.

“The Sansei are the last generation to know first-hand the stories of those who were incarcerated” says Larry Oda, past President of the Japanese American Citizens League. “In this exhibition, Sansei keep the previous generation’s stories of hope and humanity alive.” Artist Na Omi Judy Shintani describes the important role artists can play in in ensuring that the story of the incarceration is not forgotten:

“Often this history is not talked about because it brings up pain, anger, and shame. I am honored that I am trusted to take the public beyond the textbook for a window into these personal experiences and to use this material to convey how our past connects to what is currently happening in our world.”

Shadows from the Past: Sansei Artists and the American Concentration Camps, curated by Gail Enns, at the Monterey Museum of Art, Monterey, CA through January 9, 2022. The exhibition can be viewed on the museum’s website: montereyart.org. The exhibition is also online at its previous venue, the LH Horton Jr Art Gallery at San Joaquin Delta College. An exhibition catalog is available.