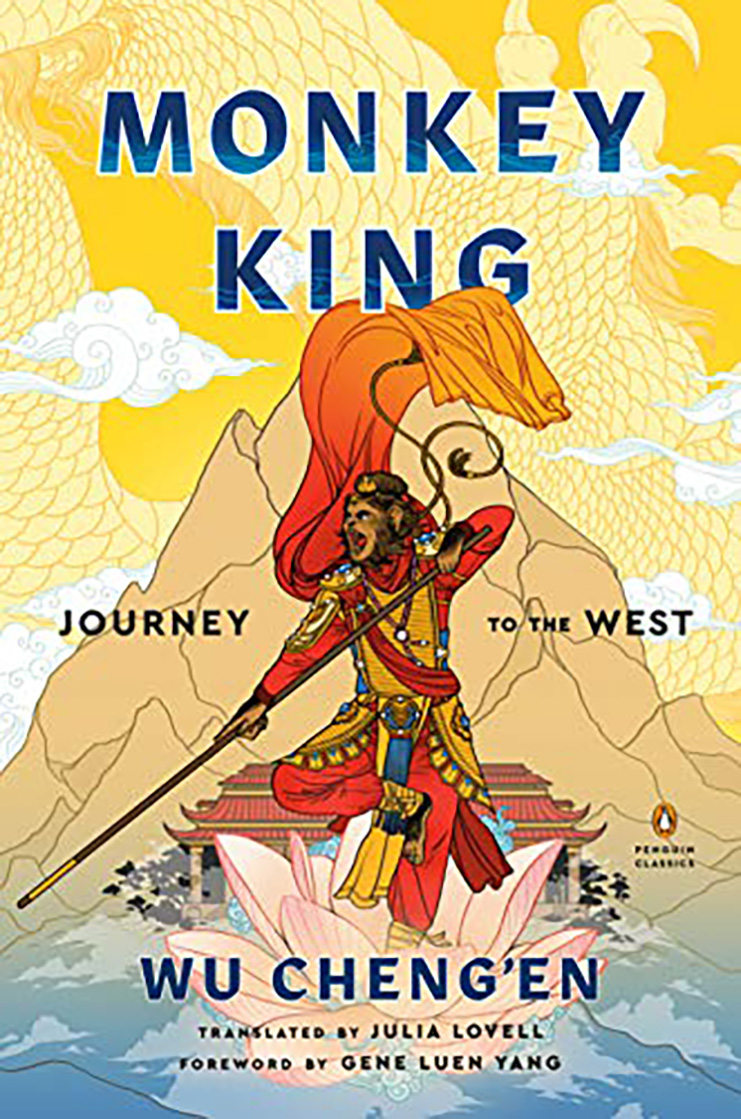 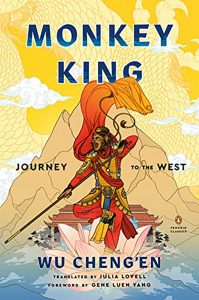 Monkey King is a new translation of Journey to the West, “one of the all-time great fantasy novels”, written in China in the 16th century. I’ve loved the adventures of Monkey King since I was very young, when my dad told me bedtime stories. I’ve also seen them in old Cantonese movies in Hong Kong. Journey to the West is such a beloved and well known novel among Chinese people that it often serves as common cultural reference points. So it is a joy to read a new translation of the stories, and relive those experiences.

From the book jacket, we read that Monkey King tells the story of “a shape-shifting trickster on a kung-fu quest for eternal life. [It] is one of the most memorable superheroes in world literature. High-spirited and omni-talented, he amasses dazzling weapons and skills on his journey to immortality … But his penchant for mischief repeatedly gets him into trouble … To redeem himself, he is to protect the pious monk Tripitaka on his … journey to India in search of precious Buddhist sutras ….

“Joined by two other fallen immortals Pigsy … and Sandy …Monkey King undergoes eighty-one trials, doing battle with … all manner of dragons, ogres, wizards, … and being serially captured, …but always hatching an ingenious plan to get himself and his fellow pilgrims out of their latest jam.”

As a fantasy adventure hero, Monkey King aptly fits the bill. He is the superhero kids love to fantasize about. Naughty. Ingenious. Powerful. His weapons and magic skills are amazing and delicious. With his sense of humor, adventurous spirit, and his love of life, he is irresistible. The stories flow from the book beautifully, and we can’t wait to find out what trouble Monkey gets into next, and how he gets out of it.

The first part of the book relates how Monkey is born and becomes King of the monkeys. He then goes on to develop his skills like leaping 108,000 miles in a single bound, and to get the most magical of weapons, “a gold-hooped staff that can grow as tall as the sky or shrink to the size of a needle.” But he gets into trouble and is put under a mountain for 500 years before he gets a chance to redeem himself.

In the second part, the monk Tripitaka is called upon to go West (from China to India) to get precious Buddhist sutras. He encounters and eventually recruits his three disciples / protectors for the journey: Monkey, Pigsy and Sandy. This part is a comedy of errors, and shows off the personalities and magic of our four pilgrims.

The third and largest part tells of the trials along this 14-year journey to the West. Our four friends encounter demons, dragons, and other powerful foes who are determined to destroy them. They offer temptations, and when the temptations fail to undo our heroes, they engage in the most spectacular battles that traverse land, sea, sky, the cosmos and the underworld. You will have to read the book to find out whether our heroes succeed into getting the precious sutras.

This is a fun book for a large range of ages. Readers ages 10 and up will find many delights. It would be fun for adults to read to children too. One can read from cover to cover. And many episodes are independent enough that one can skip some without interrupting the flow of the book.

Asians and Asian Americans can feel good that this book represents a bright star in our cultural heritage. It is entertaining and complex at the same time. It can be read as a fantasy adventure, a “comic satire”, or a “spring of spiritual insight.” The stories are as timeless now as when they were conjured up more than 500 years ago.

Monkey King is 36 chapters long in 339 pages set in a comfortable-to-read font. It’s about a quarter in length of the Chinese original. Most chapters have been shortened from the original, and many chapters completely skipped. The book is fast paced, and the 339 pages fly by. It is ideally suited for a contemporary audience, as the jacket promises that “with this new translation, the irrepressible rogue hero [Monkey] … has the potential to vault, … into the hearts of millions of Americans.

The use of contemporary phrases keeps the book fresh, like “income redistribution”, “exchange or return”, “stuff happens”, and “social network”. Perhaps in another 20 years, when our lingo changes, the book will live on with a refresh.  Some things are very difficult to translate, like the names of places and beings. To me, the name Princess Jade-Face or Pigsy loses some of the charm and poetry of the Chinese name.

Some of the humor is very traditional Chinese. I hope it remains funny in contemporary America. When Hui’an speaks to his father, Hui’an calls himself a “stupid, unworthy son” as a sign of humility. It brings me back to my youth when my dad would introduce me to new people in a similar way. It’s just a custom, not meant to hurt, but meant to be humble and humorous at the same time. There are specific Chinese/Buddhist cultural references like the Bureau of Rice Incarnation. And for a 16th century Chinese reader, accustomed to onerous government bureaucracy, official titles like the Jade Emperor’s General of Curtain-Drawing must have elicited an lol. On the other hand, some of the concepts seem edgy even by modern standards, like the “Land of Women”.

Overall, the ideas are timeless and universal. Any kid would appreciate the arbitrary punishments imposed on our heroes, the wacky adventures they have, and the inventive ways they get out of trouble. And how capricious are the rules and rule makers. Sometimes the rescuer even makes trouble for our heroes and then comes to their rescue.

The Chinese original is much longer, and the stories progress with a more leisurely pace, more details, and more character development even for minor characters like the woodcutter and fisherman in Chapter 10. The English translation only has chapter numbers, while the Chinese original also has chapter titles. I miss the titles a little, because they are poetic, and a great reference if I want to reread a particular story.

Apart from the story, I also enjoyed reading the introduction, and notes on the translation. The introduction describes the Chinese novel’s deep influence and the diverse ways it’s been viewed throughout its life from the 16th century. What the characters represented to different people. Even how the book was used politically in the 1920s and during Mao’s communist China. Monkey King also includes a fun map to track the lands we’ve visited in the stories, and a list of the major characters.

In all, it’s a fun book to read. It keeps enough good material from the Chinese original to not only satisfy our appetite, but also keep us wanting more. The extras, like the introduction, add fascinating details about the books history, and delight those of us who are curious about this great classic. And Monkey King is published just in time for a wonderful Chinese New Year gift for anyone.