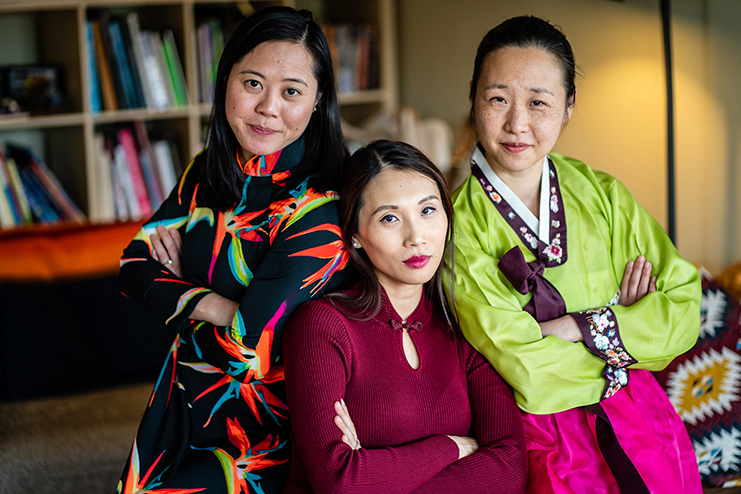 The model minority myth says that Asian Americans are successful, hard-working and prosperous, ignoring the complexity of people’s individual experiences. A similar myth exists around parenting. Social media shows happy families, and blogs focus on the optimal way to tackle every parenting question — leading to shame when real life doesn’t match the ideal.

“Model Minority Moms,” a podcast hosted by Harvard classmates and Seattle-area moms Susan Lieu, Jeanette Park and Kate Wang, works to disrupt both of these myths. Launched in April 2021, the podcast features three friends as they get real about the lonely, messy truths of parenthood.

As the children of Vietnamese, Korean and Chinese immigrants, respectively, Lieu, Park and Wang discuss how intergenerational trauma, family expectations and their own identities impact them as parents. The differences in their perspectives, views and approaches shows that you can’t just lump all Asian American moms into a homogenous group. Just as the model minority myth oversimplifies the Asian American experience, stereotypes like the “tiger mom” gloss over how complicated it gets as motherhood and heritage intersect.

The International Examiner sat down with Lieu, Park and Wang to discuss their podcast. This interview has been edited for length and clarity.

International Examiner: The podcast was launched not long after the Atlanta shootings. How did that event affect what you wanted to say in the podcast?

IE: Tell me about the name of your podcast and why it refers to the model minority. 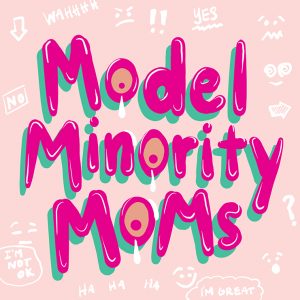 Park: There are a lot of layers to the name. If you look at us on paper you might say, “Oh yeah they fit the model minority myth. They went to Harvard and did X, Y and Z.” But I think when you actually start digging into our podcast, you’ll see we feel like we are failing in a lot of areas. We’re pushing back against a lot of expectations.

Wang: Yeah, it’s not meant to be taken at face value. A lot of people tend to lump us together all in one. So it’s kind of taking the term back. Even if it’s a term that’s become pejorative, by using it, we want to reclaim it ourselves, instead of letting other people define us.

Lieu: To me the model minority myth is about success. What we explore is how success is an evolving term. Success for my dad’s generation looked a certain way. And now, with the privilege that we have as college-educated graduates, success is different, and that success we inherited is also now different from what we want our kids to see as success.

And so, as moms in our generation we’re faced with many different micro-choices that reflect beliefs that we get to choose, not only beliefs that were forced down our throats by our parents who have been inflicted by a lot of trauma.

How else does intergenerational trauma affect you as parents?

Park: I feel like parenting is 10 times the relational intensity of marriage — when you get married you have all these issues that you can’t really hide from anymore. And with kids it’s the next step of that. And so as a parent, one of my main focuses is passing on the least amount of intergenerational trauma that I’ve inherited from my parents. If I don’t pay attention to it, it’s so easy to just transmit those things to the next generation.

But I’ve come to see a lot of the traumas that we talked about are not exclusive to being an immigrant — experiences of poverty, experiences of physical or emotional abuse at home. We do know that a good chunk of our listeners are not Asian American. The reason why they like to hear our stories is because there are elements of our stories they can really relate to. As immigrants, that’s something that we can add to the broader American conversation because those experiences are so near to us and our family histories that they’re very top of mind.

Wang: We also need to balance knowledge of admitting that there is intergenerational trauma but also realizing that it’s not about blaming. You might feel angry and blame your parents because it’s caused trauma in your life. But I think there’s the realization that it’s more of an overall tragedy caused by larger forces. And we don’t have to be helpless. Becoming parents, it becomes more imperative to confront the issue so that you can reclaim it and work through it.

Lieu: There’s something around feeling the weight of the past generation and also finally just thinking, “You know this is how we’re going to do it in my family, because this is my family now.” It’s liberating and frightening at the same time.

I really want to do my best for my son, but it’s also unpacking what “the best” ever meant and who said it, and why they said it that way, because it’s loaded. History has a big influence on how we see things. So I think, for me, as I am trying to consciously give what I can to help form the best child I can make, it’s also my own identity formation that I’m going through — a reformation of sorts.