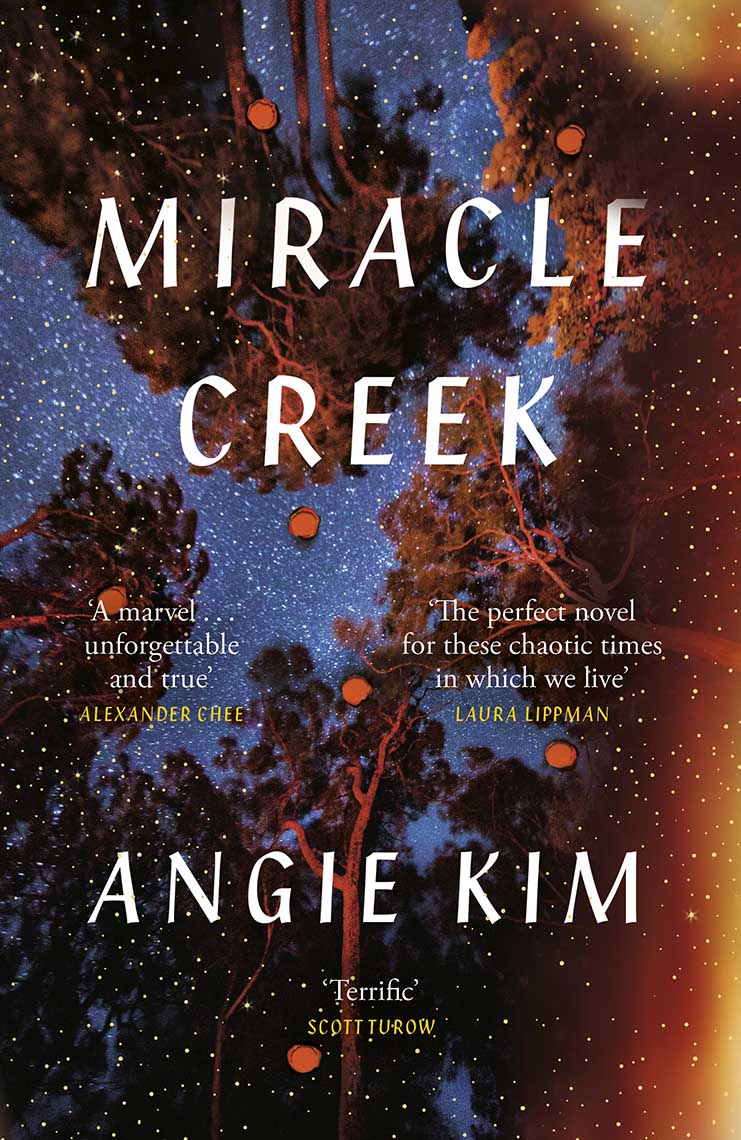 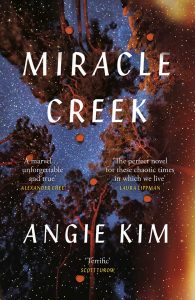 Angie Kim’s debut novel Miracle Creek is riveting, suspenseful and deeply personal. Although the story is a courtroom drama revolving around the case of Elizabeth Ward, a woman accused of arson and the murder of two people, many components of the overall story tie back to Kim’s past. Told through the perspective of seven people, this courtroom thriller unravels the mystery piece-by-piece as each of them revisit the catastrophe a year later. Since Elizabeth is the one on trial, it will become clear she is not the true culprit, and high stakes are involved because a conviction could get her the death penalty. Readers need to put on their detective hats and sift through memories and testimonies to see if they can unravel the true identity of the perpetrator before its big reveal.

The story is set in an isolated town called Miracle Creek in Virgina where the Yoo family had set up a hyperbaric oxygen therapy business. HBOT (pronounced H-BOT) involves putting patients into a pressurized room where they would be exposed to pure oxygen. The premise behind the therapy is that cells need oxygen to repair themselves. By increasing the air pressure, a patient’s lungs could take in more oxygen and increase chances for healing. The Yoos held their sessions or “dives” in a pressurized tube with portholes and named their business Miracle Submarine.

Although Elizabeth is the focus of the case, the Yoos are the true center of the story. They are Korean immigrants, and their experience resembles nothing close to the American Dream. Wanting a better life for his daughter Mary, Pak Yoo decided to take up an offer from a Korean host family living in the U.S.: sponsorship for one parent and child along with arrangements to attend a nearby school in exchange for work at their grocery store.

With Pak staying behind, Mary and his wife Young head to Baltimore and find that the host family had not been completely honest: Young was expected to work and manage the store full time with no assistance seven days a week in a dangerous neighborhood located far from the host family’s home, making it impossible for Mary to see much of her mother. On top of all that, being a new foreign student in middle school brought an onslaught of social challenges with her peers.

When Pak finally joins them, they eventually leave the host family, acquire some cheap land and open their business. Four of his clients were Elizabeth Ward and Kitt Kozlowski, mothers of autistic sons; Teresa Santiago, mother of a daughter with cerebral palsy; and Matt Thompson, a man being treated for infertility at the behest of his Korean American wife Janine. On Aug. 26, 2008, a fire in the submarine kills Kitt and Henry, Elizabeth’s 8-year-old son (Elizabeth is absent). The resulting explosion leaves the Paks in limbo, living in temporary housing while their insurance claim is being processed. As the courtroom proceedings unfold, readers gain access to the thoughts of each member of the Yoo family, Elizabeth, Teresa, Matt and Janine.

Miracle Creek is one-part whodunnit mystery and one-part emotional revelation. The whodunnit aspect keeps readers turning the pages to find out more information, but the emotional core of the story is what separates it from a regular courtroom thriller or mystery case. By devoting a chapter to one character, Kim dives deep into the problems and secrets that exist in each person’s life, transforming a standard court case into a story that has rich, emotional depth and character. As everyone tries to prevent themselves from getting implicated, lies and misdeeds are done to protect oneself or loved ones despite the fact that a person’s life is on the line.

One of the perspectives that stood out was that of Teresa and Elizabeth, mothers of children with special needs and chronic illnesses. Kim herself understands what they went through since her first son was born with sensorineural hearing loss in one ear and developed ulcerative colitis and celiac disease by the time he was 4. With standard treatment options not working and her son’s condition veering closer to malnourishment, Kim became open to alternative and experimental treatments. A friend who had tried HBOT with her autistic child eventually told Kim about the therapy when she found out it could be helpful for patients with ulcerative colitis.

Over the course of a month, Kim and her son did 40 dives in a pressurized tube that looked like a submarine. Once the tube was sealed, everyone was trapped in a dark space that Kim likened to a crucible. With their surroundings resembling a confessional and with nothing left to do but talk, the adults exchanged stories and shared their problems and worries. As parents, they naturally developed a strong bond, but Kim noticed that the supportive and competitive nature that generally existed among parents was amplified because there were more pressing things to consider, such as whether their children would be able to acquire the ability to live independently.

“Highlighting their lives was an easy decision,” said Kim in an email interview. “Their struggles and feelings (both the joys and the pains) resonated with me but weren’t so close to my own that they were difficult to write in a fictional context.”

The tussle between the two conflicting natures is fascinating to read through Teresa’s and Elizabeth’s perspectives, and the shameful, unmotherly and very human thoughts that most likely creep into every frazzled parents’ brain at some point is empathized and acknowledged. This leads back to one of Kim’s goals for the book: to let other readers who are going through the same troubles know that it is okay and normal to have these thoughts and feelings.

“I feel really strongly that we have unrealistic and harmful expectations of mothers to always be Good Mothers, with a capital G and M—to be perfect,” she says in an interview with author Mira T. Lee. “So whatever I can do to tear those expectations down, I try to do, and writing is one of those ways.”

Miracle Creek is also an immigrant story modeled after Kim’s own experience when she and her parents came to the U.S. Keen on giving their daughter a better opportunity after finding out Kim’s teacher had punished her for thinking she could become president, her parents got the opportunity to work in a grocery store in a dangerous part of Baltimore. Having come from humble beginnings in Korea where they had lived in one room with no indoor plumbing and limited electricity, Kim’s life was transformed when she moved as a preteen to the U.S. to live with her relatives in a nice suburban neighborhood. Her newfound lifestyle came at a cost: her parents practically lived in the store and could no longer spend much time with her. Kim became rebellious and resentful as a result.

She also had to deal with bullying at school and went through a vulnerable period because she could not defend herself verbally. “This is probably another reason why I’m drawn to telling stories about autism, about people with communication difficulties,” said Kim. “I know what it’s like to be unable to communicate—the frustration and great pain that comes with that—and I can’t imagine what it would be like to live with that for your entire life.”

Part of the reason Kim wanted to write the story was because she wanted to try exploring the experience from her parents’ perspective and to revisit her own troubled times by re-examining her own experience. “The Yoos are basically my family, and [my parents] definitely recognize that,” said Kim. “My mom called after she finished the book the first time, and she was crying and apologized to me for everything they’d put me through, which of course, made me cry. I told her she was being silly, that this is a fictional work, but of course, we both knew that the emotional core of the Yoos’ story was our own.”

A nonstop page-turner, Miracle Creek is perfect for people who love their courtroom thrillers and whodunnit mysteries as well as people who enjoy reading narratives about immigrant experiences. An engrossing and compelling story with a diverse array of characters, Miracle Creek shows how lies and a lack of honesty and communication can lead to an explosion of problems and catastrophe. The end will be sure to have you anticipating more from this promising new author.