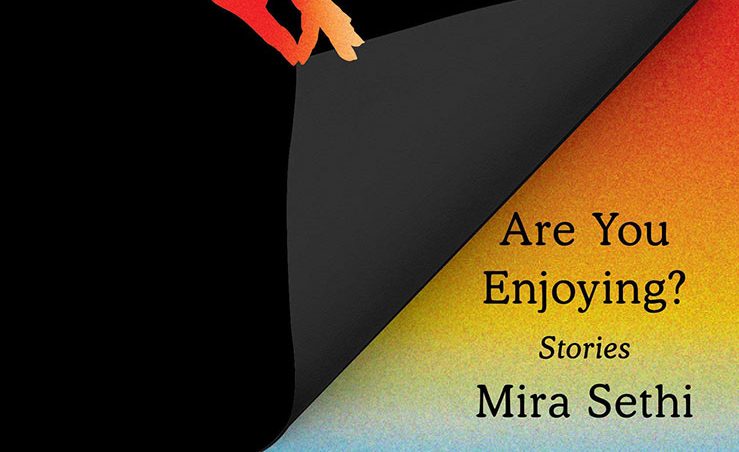 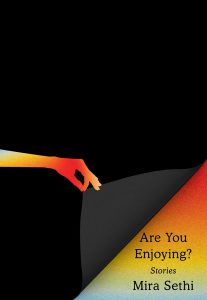 Mira Sethi has a multi-faceted career—editor, journalist, actor. With this debut short story collection, she adds one more facet as a fiction writer. She also leads a cosmopolitan life traveling between Karachi, Lahore and San Francisco. Are You Enjoying? draws from her life in the upper echelons of Pakistani society and focuses on the lives of Pakistani women primarily. It offers a nuanced look at gender, class and sexuality.

Consisting of seven longish short stories including a pair of related ones titled “Life of Its Own,” Sethi opens the collection with “Mini Apple” in which a television news personality, Javed, becomes romantically involved with Marianne, his neighbor who works for the U.S. Embassy. They live in a wealthy enclave with increased security from the Embassy because of Marianne, and as their relationship develops, the reader realizes that the American woman may be involved in a covert operation, but the infatuated Javed is naïve and vulnerable.

Unsuccessful in his romance with a colleague, he has an arranged marriage that falls apart, and now enters a relationship with Marianne. We see the relationship through Javed’s eyes, his insecurities about his romantic life, his intense sexual involvement with Marianne, and her more casual approach to him. The story explores the U.S.-Pakistan political ties through this sexual relationship and lays bare the stark cultural differences between the two.

If the American woman in this story is portrayed somewhat predictably as having more sexual freedom, political power and disregard for emotional ties, “Breezy Blessings” takes us into the world of Pakistani women actors and the difficulties a young and sheltered woman, Mehak, experiences when she chooses acting as a profession and must decide whether she will trade sexual favors for career advancement. The character who grabs our attention in this story is Roshan, the queer man who is Mehak’s assistant and friend. His manipulation of social norms and his social media savvy to mount a counter campaign to save Mehak steal our attention.

The two part “A Life of Its Own” reads like the sketch of a novel in which we follow Syeda Zareena Bokhari (ZB), her son Kashif, and her daughter-in-law Farah as they navigate feudal politics, gender roles and democracy in contemporary Pakistan. Even as the feudal landlords wield power over generations through loyalties between landlord and servant that later morph into vote banks for the landlord for a seat in government, the place of the woman in this postcolonial political landscape is complex. ZB is patron of the poor and has strong views about the place of her daughter-in-law within the family. However, as the narrative evolves and the hypocrisy of patriarchy becomes more apparent, ZB and Farah shift their roles in the family to challenge patriarchal power.

If the reader is looking for a heart-warming narrative about female power in adversity, then this narrative will be surprising. The last story “Are you Enjoying?” examines closely what it means to be a wealthy young woman in Pakistan who craves sexual freedom in a society that values marriage and chastity. When Soni falls in love with Asher, an older fading squash star who is married, the narrative provides a nuanced look at how class operates in Pakistan and the differences between the comfortable, local middle class, and the westernized, very wealthy, cosmopolitan class. The rules for men and women within each class are different and the Soni’s psychological turmoil is rendered with compassion.

Mira Sethi is a skilled writer: her narratives are well-paced, the characters nuanced, and the social critiques subtle. These stories overturn any stereotypes we might have of Pakistani culture and about Muslim women as sexually repressed and socially oppressed.

Mira Sethi will be in conversation (virtually) with Shahina Piyarali on May 19 at 6:00 PM. Elliott Bay Book Company sponsors this event with Tasveer. Register for the event.