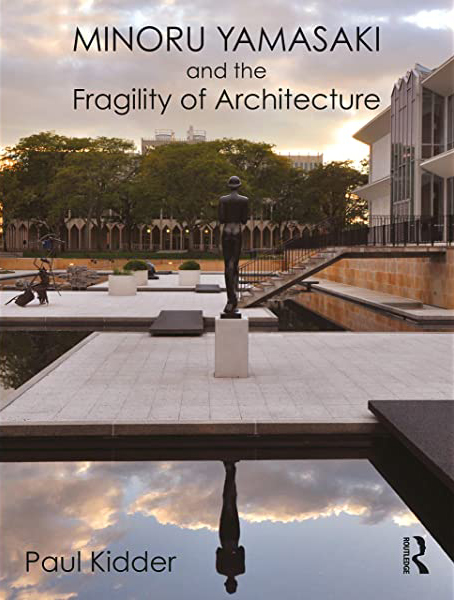 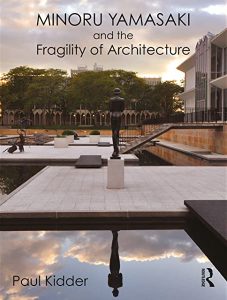 Minoru Yamasaki was an architect who strove to create buildings with grace and elegance. The spaces he crafted speak with traditions of building from around the world as much as with the modern architecture of his time. During his life (1912-1986), Yamasaki’s work was widely recognized, yielding opportunities to design buildings around the entire world. His acclaim was such that he was on the cover of Time Magazine in 1963. However, today, Yamasaki is largely left out of discussions around the greatest American architects of the 20th century.

“Minoru Yamasaki and the Fragility of Architecture” by Paul Kidder is a portrait of Yamasaki that gives insight into his work and the legacy that it holds today. As a Japanese American, Yamasaki was forcibly made an outsider within the world of architecture. His creative ingenuity, sensitivity to the human experience, and unyielding work ethic propelled him to professional success, but his identity remained a constant barrier and source of prejudice. In addition to this, his work has been enveloped in controversy and tragedy, during his life and after, that most architects could never imagine.

If you have never heard of Minoru Yamasaki, you are likely not alone. Still, you undoubtedly know at least one of his projects. He was the architect for the Federal Science Pavilion at Seattle Center, Rainier Tower in downtown Seattle, and the sweeping St. Louis Lambert Airport Terminal. He was also the architect of the controversial St. Louis public housing project, Pruitt-Igoe, and a building almost all in the United States will know, the World Trade Center in New York City. In many ways, the destruction of the twin towers make the case for Yamasaki being “America’s most intimately known architect”. Pruitt-Igoe is lesser known, but the project’s demolition symbolized a pivotal moment for urban development and housing in the United States and was ultimately deemed the death of Modern Architecture by historian Charles Jencks.

Along with the destruction of the World Trade Center and Pruitt-Igoe, the constant barrage of criticism on Yamasaki has undoubtedly impacted his work’s influence on the landscape of modern architecture in the United States. “Minoru Yamasaki and the Fragility of Architecture” gives an engaging presentation of Yamasaki’s work that is well deserved. Author Paul Kidder highlights the challenges heaped upon Yamasaki while delving into what made his vision for building unique amidst the modern architecture movement. The book touches on elements from throughout Yamasaki’s life, from growing up in Seattle, working in Alaskan fish canneries to pay his way through college, and the various, often eventful, paths his professional life took him on. While you will learn about Yamasaki’s life at its different stages, the book is not a chronological narrative. Kidder’s main goal is to give greater context to Yamasaki’s work and ultimately reflect on the fundamental premise that as buildings age there is a decision that must be made about whether they are to be preserved or demolished.

For many of the greatest architects of the 20th century, the question of whether to preserve their work today is not questioned. However, Yamasaki presents a curious case. The book takes time to clearly demonstrate the architectural merit of many of Yamasaki’s buildings and the great value of his design intent. At the same time, Kidder breaks down the criticism, racism, and historic events that have in many ways silenced the impacts of Yamasaki’s architectural vision today. In this way, “Minoru Yamasaki and the Fragility of Architecture” steps beyond being a book solely about architecture or historic preservation both in importance and in readability for a broader audience.

Storytelling is a natural way that we imbue things we care about with meaning. The opposite side is that stories that stop being shared can ultimately be forgotten. From racism and professional prejudice to the need for more sensitively designed buildings, many of the issues that Yamasaki toiled with are ever-present today. “Minoru Yamasaki and the Fragility of Architecture” continues Yamasaki’s resilience and vision in sharing his work for a new generation, offering people a chance to experience his work with a new meaning.