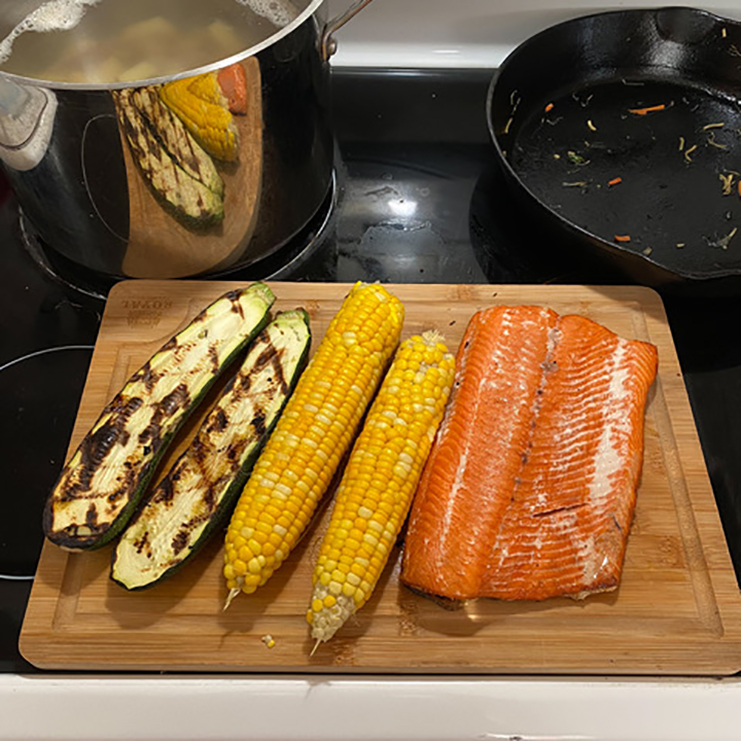 The autumn afternoon was surprisingly clear and bright. Minh Carrico and I strolled along familiar streets canopied by sweet gum trees, their leaves aflame. Mid chatter, we both stopped as we sensed shadows moving in the branches.

Silently they crossed, branch to branch, harvesting the spiked fruits from the trees. They gathered the prickly green balls, dropping them on the hard sidewalk, some already broken open, empty.

Minh Carrico – they too are a gleaner. They gather images, sounds. Over time, the harvest is a digital heap. Then the opportunity or inspiration arrives to make something of these nuggets of time.

The results, Double Take, are now on view through Dec. 9 at Edmonds College Art Gallery.

During the pandemic, Carrico was hunkered down at home in Edmonds with their partner and child – teaching online, helping their son with virtual school, cooking for the family.

“What can I make in this box?” they asked.

This was a question they had confronted before, when they lived in a dilapidated storefront, renting two rooms in a live-work warehouse in Austin in the late 1990s and early 2000s.

“Within that five-year period, my photography and graphic design work was stretched in unimaginable ways,” they recalled.

In Edmonds, while waiting for the water to boil or preparing to chop the next ingredient, Carrico would capture this “moment of stillness for myself.” It became a habit, stashing these tiny bits of time when the only sounds were the rattle of the pot lid, the creak of the floors, and the only things in sight were the foods other hands had harvested, about to be made into a meal.

“Space had opened up at the gallery, so I decided to take the opportunity to experiment with what I had been gathering over the last couple of years,” they said.

They organized the images to mirror the rhythm of days while sheltering in place: breakfast, lunch, dinner – Three Meals of Chaos – every day, for two years.

The visual rhythm created called for another layer. Carrico has long been interested in music and sound, even making Cut and Boost, a public art installation at Seattle Center, a graphic homage to an audio equalizer display. The Kronos Quartet exposed him to music that could sometimes be a drone with very subtle changes.

“I recorded the various sounds I would hear at home, in the kitchen or from another room,” they said. “I edited these snippets and organized them into four different playlists, labeled by color. At the opening, people will pick a color and scan the corresponding QR code with their device. Each visitor will then play their own playlist simultaneously. We’ll see what happens.”

What happens is a textured soundscape, the same components mixed and remixed, each time new with each visitor coming and going.

In the dozen plus years I have known Carrico, they have been mixing and remixing their creative practice, going from photography and graphic design, to writing and audio recording, to exploring NFTs. They have recently established a new creative entity, noise = grain, to reflect the multi-disciplinary direction of their work.

But the fundamental process stays the same: They glean from their surroundings, gliding from perch to perch, gathering nuggets of time to prepare the next offering.