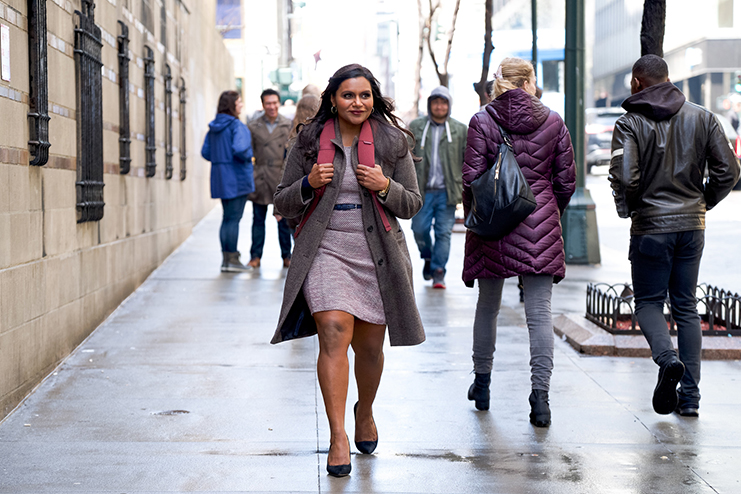 Late Night, directed by Nisha Ganatra from a screenplay by Mindy Kaling, who also stars, premiered at the Sundance Film Festival held in January to wild cheers and applause. Featuring Emma Thompson as a talk show host struggling to revamp her long-running program as the head of the network threatens to cancel it, the film adroitly tackles the myriad issues women face in the workplace, from being the so-called diversity hire to slut-shaming.

Katherine Newbury (Thompson) is a comic whose career has garnered scores of Emmys and other awards, yet her show has been in a ratings slump for years. Enraged at the suggestion that she hates women, she orders her team to hire a woman to join the show’s all-male writing staff. The resulting candidate is Molly (Kaling), whose comedic experience is limited to watching internet videos and whose television experience is nonexistent. Walking into the writer’s room full of white, fratty man-children on her first day, Molly quickly realizes that keeping her spot at the table will be an uphill battle.

What she thought was her dream job proves otherwise when, aside from the fact that her colleagues seem to resent her very existence, Molly finds it difficult to mesh with the very caustic, very English and extremely narcissistic Katherine. Molly’s earnest proposals for ways to improve the show grate against Katherine’s ears, even though this very resistance to change is what contributed to the show’s decline. With a strong supporting cast including John Lithgow, Amy Ryan, Hugh Dancy and Reid Scott, it’s easy to get lost in Molly’s journey from dreamer to doer.

During a post-screening Q&A, Ganatra and Kaling jokingly described themselves as the only Indian-Americans women working in comedy. The sense of isolation that Molly experiences in the workplace and her determination to prove herself are all too relatable; while her male counterparts are able to get away with offering little to no utility, Molly must work twice as hard to even begin to be taken seriously. Even so, she doesn’t let the other writers’ initial hostility get her down. Stuck in a room full of WASPy, privileged men, Molly lets loose many quips that any self-respecting woman of color has fantasized about lobbing.

Similar to what Amy Schumer’s 2015 film Trainwreck did in regard to dating and relationships, Late Night offers clarity in a playful yet pointed way as to what it’s like being a working woman in today’s society. Female viewers will feel empowered by Molly’s refusal to let white male privilege take away from her capabilities and Katherine’s self-deprecating jokes about age and gender. Male viewers, no matter how woke they may be, will hopefully gain more empathy. The struggle is very real, and we need to see more of it depicted onscreen.