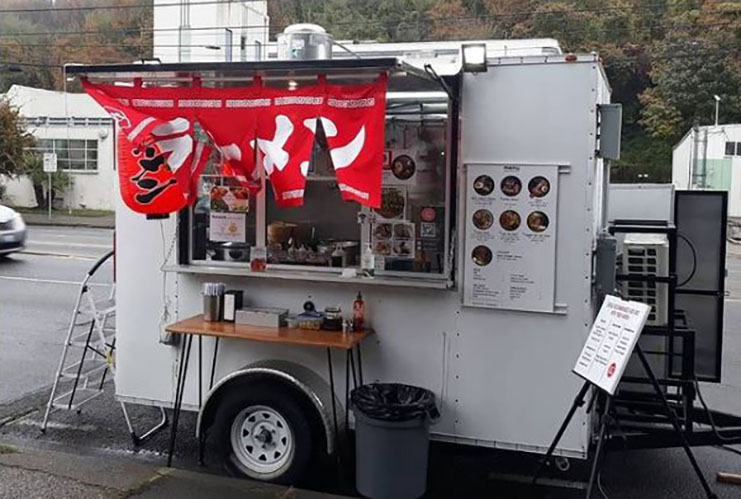 Diners across multiple continents have enjoyed the cooking of chef Elmer Komagata, and now Seattle residents are the lucky beneficiaries of Komagata’s choice to relocate to Seattle and set up a yatai, or ramen food cart. This establishment, Midnite Ramen, draws its name from traditional Japanese yatai, which served yonakisoba, or midnight ramen, during late-night hours.

A multi-decade, around-the-world career led Komagata to the Puget Sound, even though Komagata had initially never expected to leave Japan during his 20’s. “After my parents got divorced in my late teens, my mother contacted me out of the blue a decade later, asking me to visit her in the States,” he said. “What was supposed to be a one-week stay turned out to be a permanent one.”

From there, Komagata was proactive in networking with chefs whom he considered role models. “I connected with Raymond Oliver via snail mail through an acquaintance,” Komagata said, “which led me to visit him in France.”

That meeting led Komagata to work in Paris from 1984 to 1987, and then move on to Los Angeles and then Mexico for the next couple of decades before reconnecting with his Japanese roots. “I worked with a Japanese friend who exported Japanese Sake from 2007 to 2011,” he said. “I went back to Japan every two months visiting sake breweries all around Japan. I think I visited around 20 breweries, having the opportunity to taste local foods and the local ramen.”

These meals were inspiring. “I opened a Japanese ramen restaurant in the outskirts of L.A. in 2011 called Fuujin,” Komagata recounted. “I ran it for four years, but figured that it needed a new business model.”

After some research and trial-and-error experiments, Komagata settled on the concept of the yatai, but lacked the means to launch that idea in Los Angeles. “I made the decision to move to Seattle, with the help of an old family friend,” he said. “Four years passed, as I didn’t have enough funds nor resources.”

But Komagata didn’t give up. “I started looking for food trucks first, but every model here in the United States was too big,” he said. “I then looked for trailers that were 10×7 feet, which took me about half a year to find, finally settling on a company who made their trucks in Mexico.”

Komagata finally received his trailer in December, 2019, but he reports that the electricity, gas, plumbing, piping, and equipment did not meet Washington State Labor and Industries requirements. “I had to get rid of most parts and re-assemble the inside of the trailer,” he said. “I finally obtained the L&I permit after two rounds of fixings. As a result, we ended up opening for business in September of 2020.”

But the current pandemic forced Komagata to rethink his concept again. “At first, I was hoping to serve ramen from 7:00 PM until midnight or 1:00 AM in Capitol Hill area,” he said, “but those plans were tossed when COVID-19 hit.”

So he took a page from other local food trucks. “I eventually figured out that we can park in front of breweries which typically are set for dinner shifts from 4-8 PM or 5-9 PM,” he said. “Having been open these last several months, with 10 to 20 folks lined up, being in service non-stop from open until close, our limit is 120 servings of ramen, noodle, broth and toppings included.”

Komagata reports long lines and happy smiles from delighted children. “That smile makes it all worth it,” he said. “We’ve had too many days where we have to let the last five to ten folks know that we have run out for the day.”

But Komagata doesn’t have to shoulder all this work alone, as his wife Izumi has joined him inside the truck. “Out of all the restaurant experience I’ve had with Elmer,” she said, “this one is the most physical to date, but also the most rewarding.”

Izumi Komagata has enjoyed moving to Seattle more than expected. “The first thing I was pleasantly surprised by was how courteous and polite Seattleites are,” she said. “It makes me happy to hear people repeat arigato in a reciprocal fashion.”

The Komagatas also have reliable help with the administrative side of Midnite Ramen. “First and foremost, English is too hard for me to understand, let alone business and technical lingo that I’m not familiar with,” Elmer Komagata said. “There’s so many applications and forms needed to obtain a permit here in Washington state.”

This is where Chef Komagata’s connections have again come in handy. “Risa, the eldest daughter of a family friend has been helping us with submitting the necessary forms, maintaining administrative work, communicating via email and phones, and helping us maintain our website and social media,” he said. “Since we have Risa to take care of everything behind the scenes, Izumi and I can focus on making ramen every day and serving customers face to face.”

That’s important, because the Komagatas work a 13-hour day just to serve customers during the dinner hour. “We currently spend five hours prepping, commuting four hours, and serving and being open for business for four hours,” he reported. “We transport all the food items to and from our car to the trailer four times in one day. We have a portable electric refrigerator in our car to preserve raw items so there’s no issues in terms of the sanitation, but it takes a lot of hard labor and time.”

To focus on the yatai’s customers more efficiently, Komagata dreams of having a permanent location with an on-site kitchen. “We hope to collect funds for us to have a roof, tables, chairs, bathroom, and kitchen with an open space,” he said, “so that we can build an online order-to-go station in addition to our trailer serving people who want to eat-in.”

Beyond quantity, though, Komagata is interested in quality and variety. “It’s been said that there’s about 50 local ramen flavors in Japan, where local folks in their 50s and 60s take pride in their local flavor,” he said. “Midnite Ramen aims to spread these different local regional ramen flavors so that more people familiarize themselves with authentic Japanese flavors.”

Komagata hopes his work also inspires Americans to try Japanese cuisine in its native environment. “We’re positive you’ll love exploring regional Japanese ramen once you can travel to Japan,” he said. “These wishes and hopes are what motivate me to come up with new menu items, fifteen strong for now.”

And it’s to accommodate these new offerings that Midnite Ramen is seeking to expand its capacity. “We’re hoping this new goal comes to fruition so that we don’t need to send folks home without serving them,” he said. “Be on the look-out for a fundraising campaign coming soon.”