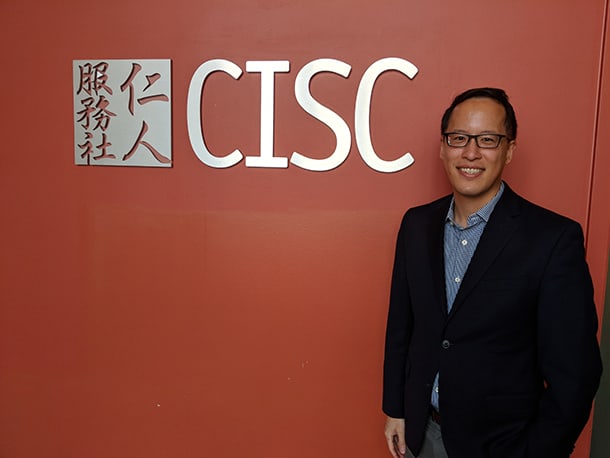 During a weekday morning tour of the Chinese Information and Service Center (CISC) with its new executive director Michael Itti, immigrants at both ends of the life spectrum are actively participating in its services. On the lobby level, preschoolers and their caregivers are handling books and toys, and upstairs in the Sunshine Garden Community Center, Chinese seniors are practicing the art of tai chi.

A long-time supporter of CISC, stemming from a friendship dinner years ago, Itti has been at CISC’s helm for just two months. He is busy learning from its 100 staff and 250 volunteers – many of whom are bilingual, bicultural, first generation immigrants – how CISC’s programs at 17 sites throughout King County improve immigrants’ early transitions and keep later generations connected to their heritage.

According to a report published in spring 2018 by the King County Immigrant and Refugee Task Force, this county of two million residents grows more diverse each year. More than half of the county’s new population over the past decade is foreign-born, with most living in communities outside of Seattle. CISC has offices in Bellevue, Redmond, and Kent, with Itti noting that South King County and the Eastside are “very diverse,” with immigrants and refugees from all parts of Asia, Eastern Europe, Africa, and Latin America.

True to its name, CISC’s primary focus is on Chinese immigrants, but no one is turned away because of their culture and race. Its tagline is “Bridging cultures, communities, and generations.” Today, CISC serves many Vietnamese, Russian, Latino, South Asian, and East African immigrants, and is making intentional efforts to develop future programs.

“My role as the agency’s executive director is to expand our services to support immigrants throughout King County and beyond,” Itti says. “Over 46 years, the agency has accumulated many strengths, which we can share in service to other immigrant groups beyond the Chinese. It’s a commitment of mine to support immigrant communities, raising their voices and political power to make sure people have equitable access to opportunity, kids have the support they need, and that seniors thrive in a healthy way.”

Itti is the oldest son of Thai immigrants to Washington state. He was born and raised in Kirkland. In the 1980s, his parents owned one of the state’s first Thai restaurants, the former Thai Palace in South Lake Union. His mother, a political science major, was an active supporter of local elected officials and member of Eastside Asian Pacific Islanders. Inspired by the small business owners, lawyers involved in social justice and civil rights, and those working in healthcare access and nonprofit services, Itti headed to George Washington University in Washington, DC for a bachelor’s degree in business administration. When asked whether he’s considered running for office, he said, “Not seriously, but I am passionate about civic engagement, and bringing people to the table who can use their voices and lived experiences to strengthen community.”

Itti came to CISC from serving five years as executive director of the Washington State Commission on Asian Pacific American Affairs, appointed by Governor Jay Inslee. Previously, he worked for the Asian and Pacific Islander American Voices in Education Initiative at the Win/Win Network, the Washington State Legislature, and the League of Education Voters. Itti is currently vice president of the board of the Seattle Chinatown International District Preservation and Development Authority (SCIDpda) and is a former board member for the Greater Seattle Chinese Chamber of Commerce.

Besides the influence of his mother and her comrades, “we’ve all been inspired by the Gang of Four,” Itti says, referring to the leaders from different racial groups, including the late Uncle Bob Santos, who co-founded Seattle’s Minority Executive Directors’ Coalition. “A generation of activists, social workers, nonprofit leaders, and community organizers built ICHS, ACRS, SCIDpda, and other organizations. All of those were created out of activism from people who saw a need in this community and responded by building a movement to effect change.”

Itti’s challenges are to ensure that CISC has adequate resources in a dynamic and competitive funding environment, and to operate amidst today’s anti-immigrant sentiment and policies under the Trump administration. “Obviously, CISC is against the public charge and the new rule change,” he states. “We know how vital public services are to many immigrants to ensure their access to the American Dream. We will always continue to support immigrants throughout King County.”

To that end, he is committed to seeking diversity among CISC staff and its board of directors to reflect its target populations. CISC is prioritizing a strong Russian case management program and actively recruiting board members who are Russian speakers. At press time, employment listings were posted by CISC for Russian, Vietnamese, Chinese, and Spanish speakers in the Cultural Navigator Program.

Though Itti is an active API community volunteer and Seattle resident, the CISC role has offered the opportunity to work directly in the CID on a daily basis. Reflecting on this change, Itti says, “Walking through the CID brings up memories and all the history. Supporting the local businesses, seeing familiar faces, passing the seniors playing outside [chess at Hing Hay Park] reminds me how important this neighborhood is to the API community and how important it is for our collective work to help immigrant communities thrive. Also, it reminds me of the growing importance of building power and coalitions across communities throughout our region.”