The International Examiner asked the community to share their memories of Donnie Chin. What follows are some of the responses. Please visit iexaminer.org and see future issues of the IE for more memories. And please continue to share your memories of Donnie by emailing [email protected]

Shortly after I began working at the Wing Luke Museum, Donnie walked through the front door to the visitor services desk, silently handed me a USPS priority mail envelope that read “To Chris, From Donnie” with an ever-so-faint mysterious grin, and walked out. I opened it up to find a copy of Art and Doug Chin’s Chinese in Washington State. As a person of mixed ethnic heritage, I have often felt a creeping sense that I don’t belong. Donnie was the first person to truly welcome and accept me as a Chinese American, and a full member of this community. He was a deeply generous and thoughtful person, frequently gifting history books and items from Sun May Co. to young employees in the neighborhood. He recognized the importance of passing on his experiences and helping grow the next generation of advocates for this community. He also had a funny habit of delivering these gifts in free shipping materials from the Maynard post office—the kind you take away to put your mail in, then bring back, weigh and pay. Sometimes I wonder how many envelopes and boxes they produced for him to locally hand-deliver.

Donnie often sent out emails to the IDEC crew on Father’s Day and Mother’s Day. Here is one of Donnie’s Father’s Day emails:

From all of us at IDEC to all the dads who work here and the dads who made it possible that we enjoy the freedoms that we have.

Our fathers … they came to America … They wanted a better life for their families. Some came from untold poverty, war torn homes, burned-out villages, dry farm land. They arrived to find the hopes and dreams they heard about in mud choked streets. Long working hours in red hot kitchens, freezing cold fish plants, under the sun on farms, the darkness of the hulls of liberty ships, early mornings or late nights cleaning hotels and toilets … harsh conditions trying to make a living in the land of the “free and the brave.” Some were barred from going to school, becoming citizens, voting. When called upon to defend the nation—they fought against those who would harm us. Some went overseas to battle Nazis, Imperialists, Terrorists. Those who did not return are etched in stone and in our memories. They knew that freedom isn’t ever free. Back in America … they fought against racism and injustice. They fought for better schools, living and working conditions, bilingual services, voting rights.

Our fathers worked long hours for little pay trying to support their family. They taught us to stand up for what was right. Fight against what was wrong. We all owe our fathers more than they will ever know. To our fathers who are here and to those that are a memory, we are still here trying to do the right thing, right here at IDEC. Thanks for everything dad, this day and everyday you are in our thoughts.

For this Father’s Day—remember the dads overseas fighting the war and standing the line in the DMZ.

Though I have known for a long time that I wanted to work in community health, it has been hard to put into words exactly why. But when standing at the community meeting last year sharing in the collective shock and pain over Donnie’s death, I found myself remembering the beautiful lessons about community that Donnie exemplified.

It’s hard to know how to write about Donnie. How do you put a person like him into words? I don’t think you can comprehend how large a person’s physical life is until they are gone and the enormity of it sinks in. I remember so vividly the tour Donnie took us on. I had been in the ID many times before but Donnie made it come alive. He had this knack for telling history with a mix of vivid passion and profanity telling stories about racial injustice and the legacy of people in the ID who would otherwise be forgotten. He was the one who introduced us to the ID and moreover to the community. He welcomed us, he oriented us, he shared with us the history of the community. As an outsider, he weaved together a beautiful picture of what the ID meant and helped me understand the context from which our patients come. Moreover, it was evident that he was a vital part of holding this web of interconnectedness together.

People like Donnie don’t exist anymore. I feel a pain from his passing not only because of what he meant to me in the short time I knew him, but moreover, for what he stood for and what he meant to the community. He was the community storyteller, historian, secret keeper, mentor, police officer, first responder. He was Donnie. He didn’t even need his last name, he was just a figure, somebody who was known to everybody. The week before as we were leaving the clinic we heard noise coming from Donnie’s alley. It was music, people, art, and food. It was community. And it was beautiful. Donnie welcomed us, gave me a big plate of delicious meat, we talked for a bit, and then moved on to let him get to the umpteen other people who wanted to say hi. That’s my last memory of him. And I’m sure there were thousands more stories of the big and small acts of kindness he did for others. I want them to be catalogued just like the history he so carefully kept of the ID.

He had an unquenchable drive to keep the community together and safe at all cost, against all odds. He was raw, real, he brought the streets to life and made the walls of old buildings whisper stories of the past.

Donnie was a kind man who was always watching over everybody at ICHS. When I was getting off from work during the winter, I saw him on the street. He stopped me and asked where I was going. I said I was going to my car so he escorted me to my car. Because of him, I felt safe. He was always accessible and helpful to the clinic. Whenever we called 911 to transport a patient to the hospital, he arrived to the scene before EMS. Donnie devoted his life to the community. He was the greatest. It is hard to find someone like him. 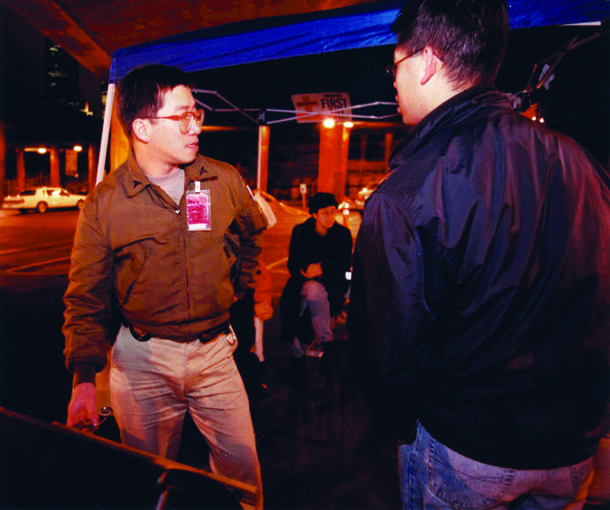