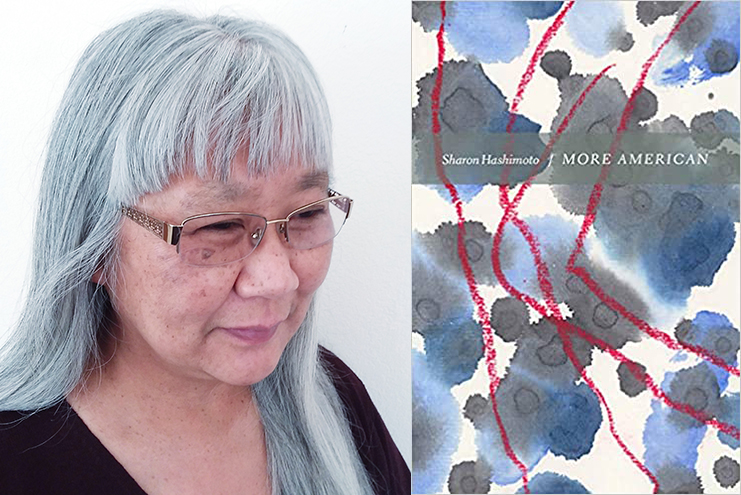 Sharon Hashimoto starts a poem from an image.

“My grandmother’s soup, and how she would have weenies and soyu and sugar and ketchup and I remember how well that tasted…she had a half-electric stove and a sink that she washed my sister in when she was a baby.”

Hashimoto’s newest poetry collection More American captures a variety of images in its pages. It opens with her grandma in the kitchen from the point of view of young Hashimoto weaving her way through the hyphen of Japanese-American identity. Themes of identity, loss, and memory have a strong presence throughout the collection of poems.

Hashimoto has long been interested in exploring the Issei story and her relationship with memory and how that changes over time. Her writing career began with short stories, but she soon realized she had an affinity for poetry. She attended nighttime workshops at the University of Washington with Dr. Nelson Bentley, the self-proclaimed father of many Pacific Northwest poets. Hashimoto grew as a poet under his teachings but continues to enjoy creating in all genres.

“I just see myself as someone who writes,” Hashimoto said.

More American stems from poems Hashimoto wrote day to day over a 20-year period inspired by fleeting bits of memory and image. She recalls stories passed down two generations and wonders how much she can rely on her memory. She grapples with the death of her father and the realization that it is up to her generation to make sure these stories continue to live on.

In More American, Hashimoto treats memories as “ghosts;” brief images the mind remembers that may or may not do the actual turn of events justice. When writing poems about her grandparents’ experience in Japanese incarceration during WWII, Hashimoto pulled on historical research and stories told to her by her grandparents. However, she will never truly know what that experience was like or the amount the stories are romanticized. Hashimoto was sparked to explore this concept further when reading Judgment Without Trial: Japanese American Imprisonment During World War II by Dr. Tetsuden Kashima, a professor from her PhD program.

She came across a section talking about how the third generation of Japanese Americans don’t know the stories of the Issei and what they were really up against during and after incarceratin. There was a line saying that the young generations don’t have a clear understanding of the events so they romanticize the idea. Intrigued, Hashimoto turned to the back of the book to the citations and discovered that Dr. Kashima had cited her poem Reparations from her first poetry collection The Crane Wife.

“The line I had was talking about my mother telling me about Heart Mountain and how she doesn’t really remember it, and so I’m imagining her being about 13 years old. Well, after I did the math, I realized my mother had to have been something like 18, 17, maybe at the earliest 16. So it is all wrong, that poem is all wrong. I’m the point that Dr. Kashima was making…Unless the stories are really told, and I don’t know many who will do that, it’s up for grabs for how much you want to romanticize it.”

The collection has four sections: Japanese-American Dictionary, The War, No Wrong Turnings, and Those Left to Tell, touching on childhood memories, WWII, her father’s death, and adulthood. When selecting a cover, Hashimoto wanted something abstract that told the story of her poetry. She turned to long-time friend and artist Alan Lau, the International Examiner arts editor. Lau created abstract art pieces for 13 poems in the book and Hashimoto decided on the piece inspired by the poem One of the World’s Oldest Twins Dies At Age 107 in Japan: Kin Narita, 1892-2000 because of the blue, red, and white colors emulating the American theme. The poem also touches on the value of the experiences of elders and how their memories pass on with them.

Although deeply vulnerable and personal, the poetry in More American touches on relatable themes for a wide audience. Hashimoto hopes readers will connect with her desire to remember her family and the small moments that turned into “ghosts” of memories.