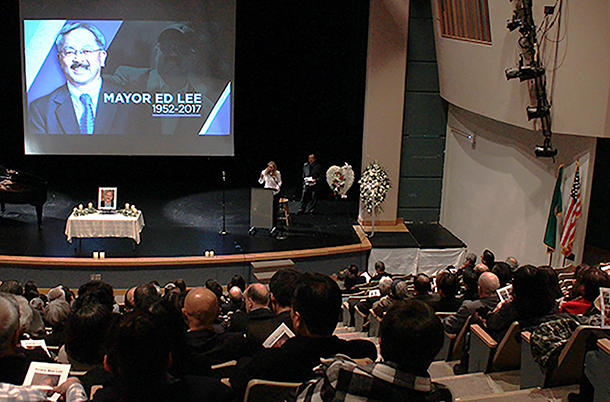 The streets by Franklin High School (FHS) were full of parked cars as many showed up to pay their respects Saturday for the recently deceased San Francisco Mayor Edwin Lee.

Edwin Mah Lee was born and raised in Seattle’s Beacon Hill neighborhood. Growing up, his siblings saw the traits of a leader. Lee often held meetings after school, usually for student government, while playing sports and working part time. Though reaching multiple positions of considerable status, Lee never forgot how hard his own mother worked, being a first generation immigrant who lost her husband early in life.

“He never forgot the sacrifices she made,” said his sister, Linna Kitamura to the large crowd gathered for his memorial. She prevented her voice from breaking down as her throat tightened. “He always made time for family.”

“He gave us a shining example of how we all can be,” said FHS’s current principal, Jennifer Wiley. Lee was an FHS alum.

Michael Fong, from the Seattle mayor’s office, explained how Lee broke barriers. He was the first Asian mayor for San Francisco and Lee was a first generation college graduate.

But Lee did not climb to his ranks alone. He grew up with five siblings and had so much support by the time he was forced into the interim mayoral position for San Francisco that a whole community and a few sly politicians got Lee his mayoral seat. Videos and speakers at his memorial service explained, and often laughed at, the fact that Lee ultimately didn’t want his mayoral position but was rather tricked into it. The everyday people who supported him in San Francisco created their own campaign for him with the slogan, “Run Ed Run!” Accompanied with it was a Monopoly-esque caricature of Lee.

Before this flurry, Lee frequently advocated for the homeless and for affordable housing. He even campaigned for Hillary Clinton. Lee once prevented eviction of Filipino immigrants from a hotel. During his time as San Francisco mayor, the city’s unemployment rate dropped from 10 percent to 2.7 percent. He also created or rehabilitated 17,000 units while being mayor, with the goal of creating 30,000 by 2022. Lee additionally founded and implemented San Francisco’s Navigation Center, a homelessness service and shelter that Seattle attempts modeling today.

“Ed never forgot his roots,” said Gary Locke. “In fact, they shaped and guided all he did in his life … Ed was really the embodiment of what could be accomplished with the true American values of openness, respect, tolerance and freedom.”

Lee’s friend and family painted him as an incessant jokester, a die-hard 49ers fan, and a small town blues enthusiast. He was always more than willing to extend a helping hand and to spread his happiness around.

“He had an engaging smile and contagious laugh that often made others laugh with him,” said Manny Lee. A few in the audience wiped tears from their eyes.

Karl Lee, the mayor’s older brother, recited memories he shared with his brother during golf tournaments that raised money for the marginalized.

“We’re going to next year’s competition with heavy hearts,” Karl Lee said, “but we know he will be with us.”

Among those notable famous figures who wrote to the family in lieu of Lee’s death: Will.I.Am, President Barack Obama, Hillary Clinton and Tony Bennett.

Deems Tsutakawa, a Seattle jazz and blues musician and old friend of Lee’s, closed out the memorial service on piano.

“I ask we all leave here and take [Lee] with us,” said Nate Miles, someone who Lee housed and clothed. Miles refers to Lee as Uncle because of their tight-knit relationship. “That’s all we can do. The spirit of Uncle Ed will be in all of us.”