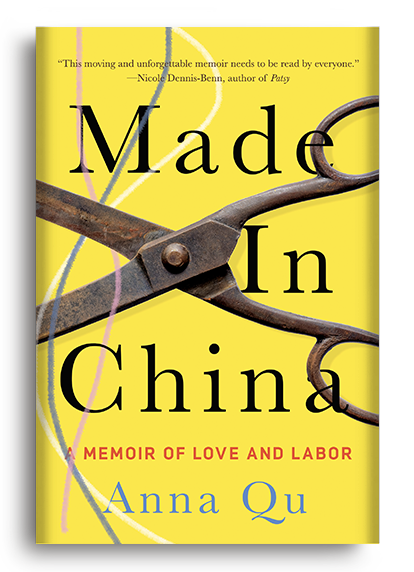 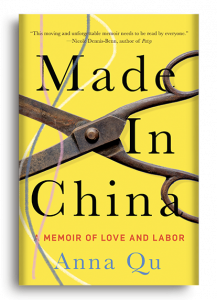 Besides reading Qu’s memoir, I also got the opportunity to attend her book event hosted by Elliott Bay Books on Zoom with author Melissa Febos (Whip Smart, Abandon Me and Girlhood). Qu’s book has a long introduction, and Qu explained this, saying she wanted to show more of the father and son, and another woman who helped her at the garment factory. With many similar scenes in the book, she explained that she wanted the book to be an opportunity to shine a light on other immigrants, and the fact that there is so much about immigration that is not a choice.

Qu said, “One of the reasons I wrote this book is because I don’t fit the model minority myth, and I’m writing against that narrative.”

Qu worked on the memoir for more than 10 years. She says she didn’t let anyone read it because she couldn’t trust anyone. After everything she’d been through, how could she? She was living lie after lie, one shame after another.

As a toddler without parents, Qu was left with her grandparents. Her widowed mother left Wenzhou, China to immigrate to the United States where she remarried to the owner of the sweatshop and had two kids. After five years, “mother’s failing promise [that she would come back for Qu] steeped like tea, growing dark and bitter.” It was not until Qu was seven that her mother came back for her.

Filled by her grandmother with images of how “fairy tale” America was going to be, Qu arrived in America with a list of expectations, which were shattered by her mother’s abuse. Despite getting good grades in school, she was forced to work at her mother’s garment factory and be a house maid because “helping the family came first.” She was punished for doing homework.

As a teenager, when she finally had the courage to find a way on her own, her middle school counselor suggested to call child services on her behalf. This part is the one I felt I related the most. I was once an undocumented immigrant. It was suggested to me that I make a call to report my abusive ex-husband. Child Protection Services also became involved because we have a child together. The paranoid, mixed feelings were real. Like Qu, I could not sleep. Lying awake, I thought of all the possibilities with the same scenario of me being deported without my child. It helps to hear Qu shares:

I felt exposed, like things were out of control. I was wrong for coming here […] I was going to get in trouble, and nothing was going to change […]

I couldn’t breathe. What I wanted? What I wanted was impossible! I wanted a father who was alive, a mother who cared for and loved me unconditionally. […] How could I call the government on the only family I had ever known? There didn’t seem to be enough air.

For once, I did not feel alone.

The pain and struggle become evident throughout the book. Her intention was to reconcile, to make her mother love her. Unfortunately, school counselor, bilingual social worker, and those who work in the system have standard protocols to follow. They have their what Qu called their “practiced line”: “Not interested in getting between.” That fixing family was not their goal as much as seeing less conflict was.

Nearly 20 years later, at a start-up life, after hearing the news about her grandfather’s funeral that her mother attended with her stepfather without her, and on the brink of losing her job,  Qu wanted  to “unearth and understand what happened all those years ago.” In search for her identity, her dignity, her life truths, the meaning of labor and as her “way forward,” she obtained a copy of her original records from the Office of Child and Family Services (OCFS).

The original record, however, tells a different narrative. Feeling “shame and disillusionment,” she felt that the system let her down. It was supposed to safeguard her but didn’t believe her. She felt she “was wrong to call them, wrong to think they stood for justice and the safety of children, wrong to be naïve, wrong to be so idealistic.” She wondered if the two governments were in fact not very different from one another.

In the end, Qu realized, “We are all raised by children. Children that are shaped by their own traumas, some of them unable to forget or overcome what happened to them before they passed it along.” She also recognized that her mother’s life goal was like that of many immigrants: “An impossible number of contradictions, but a common one among immigrants.”

Opinion: Redistricting and how it impacts Chinatown-ID and South Seattle