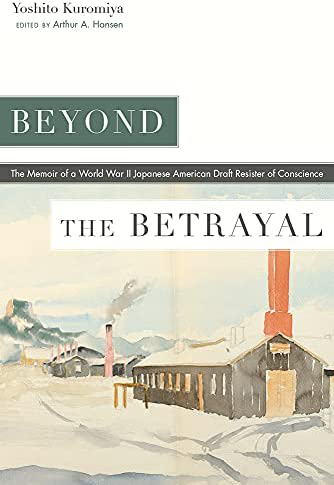 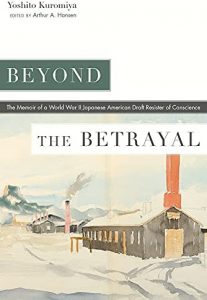 “When the JACL (Japanese American Citizens League) endorsed the mandatory induction of citizens from the camps into racially segregated military units on the pretext of  ‘proving their loyalty’, they in effect preempted every citizen’s right of free choice to serve or not to serve according to his conscience while under specific conditions of duress unique to his situation in the unspoken trust between each citizen and his government. The JACL, through its threat of social ostracism, did indeed abrogate that trust”.

So says Yoshito Kuromiya in Beyond the Betrayal: The Memoir of a World War II Japanese Draft Resister of Conscience. He was one of the men who said no to being drafted into the army during WW II. He was one of those American citizens with parents who came from Japan who had been put into an American concentration camp during that war solely because all persons of Japanese ancestry living on the West Coast were considered threats to America. He was one of nearly 300 men who refused induction into the army when the government decided to impose the draft in 1943. At age 19, Kuromiya clearly understood that the government’s act of imprisoning Japanese Americans was illegal and a clear violation the American constitution. After conviction as a draft dodger, he spent 3 years in a prison in Washington State and had to live the rest of his life labeled a resister, a draft dodger.

Beyond the Betrayal is a memoir of Kuromiya’s life, primarily written for his family so that they would remember his story, but it is also the only published book written by a resister laying out how he came to take that stand, and what effect that act had on the rest of his life. As such, it is a very valuable addition to the literature of the incarceration story because we are getting a personal look at  a subject that still remains somewhat marginalized and not given it’s due in the history books. Kuromiya was not a scholar or an academic and he was not writing with publication in mind, but he was a person of great perception, of deep understanding and it is obvious that he had given a great deal of thought to the things that had shaped his life.  And because he writes so openly, so candidly about himself, he comes alive in these pages. His depictions of his mother and father are complex and vivid. This immigrant couple who had a long struggle to establish a life in this new and strange country were faced with disaster when war broke out, but Kuromiya shows how their old world influences, particularly his father’s sense of honor, mixed with new world values shaped him into a young man who would stand up for what he believed.

The quote that heads this piece attests to the fact that Kuromiya recognized that a faction within the Japanese American community, the JACL, which was a small organization of young Japanese Americans, had taken upon themselves the role of representing the entire community during this turbulent period before, during, and after the war. He makes the case that this group betrayed the community in various ways, particularly by insisting that the way to prove loyalty to America was to serve in the army. In their zeal to prove their loyalty and devotion to America, JACL leaders went along with the government and the loyalty program using the infamous loyalty questionnaire to divide the group into loyal and disloyal factions, thus creating a huge divide within the community, a divide that has persisted to this day in many ways. Kuromiya and the other resisters were labeled draft dodgers and were ostracized and made to feel like outcasts within the community.

It was much later, during the 1970s, that the history of the resisters began to surface. Kuromiya lived long enough to witness a slow change of attitude toward them in the community due to the persistence of some who learned about them and began to tell their story, chief among them, writer Frank Chin, and Frank Abe. Kuromiya became acquainted with scholars and political activists, artists and dramatists, who championed the Resisters and brought attention to the hidden stories, validating their positions which had brought so much grief on them and their families. In 2000, Abe made a documentary “Conscience and the Constitution” about the Resisters, and Kuromiya was featured in it.  Resistance was included in “Rabbit In the Moon” (1999), a documentary about the incarceration made by Emiko Omori and myself. In 2001, law professor Eric Muller published Free To Die For Their Country, a thorough accounting of the Heart Mountain Draft Resisters. I became friends with a number of these men, and came to understand that what the government did to the Japanese American community had many tragic dimensions, chief among them controversies like the draft. Families, friendships, organizations were broken up due to these struggles, some never healed even with the passage of time.

Kuromiya deeply grasped these realities and expresses them with eloquence and heart. He did go on to live an interesting and rewarding life, using his artistic talents in a successful career as a landscape architect. He took his beliefs and incorporated them into his work, creating environmentally friendly spaces, always aware that these places were to be designed for people. He left corporate jobs because of the dehumanizing effects of their policies and built his own business. He raised a family and became a respected member of the community.

However, his interpretation of the American ideal resulted in his feeling that those who led the JACL at that time did not have that strong commitment to those ideals, that they were willing to betray the Japanese American community to push their version of loyalty and to influence government policy. I agree with him. A great many lives were ruined because of this betrayal, and consequently, our community suffered through traumatic times. As he says, “conscience sometimes comes at a high price”.

Finally, in 2002, the JACL did apologize to the draft resisters, and in 2018, voted for an apology to those who had been hurt by its’ wartime decisions and policies. It was a long time coming, and not as full throated as I would have liked, but it was at least an acknowledgement of the organization’s culpability. So, Kuromiya lived to see all this, but it was bittersweet. The Japanese American community will always carry shadows of the incarceration experience.  Beyond the Betrayal casts a beam of light through these shadows.