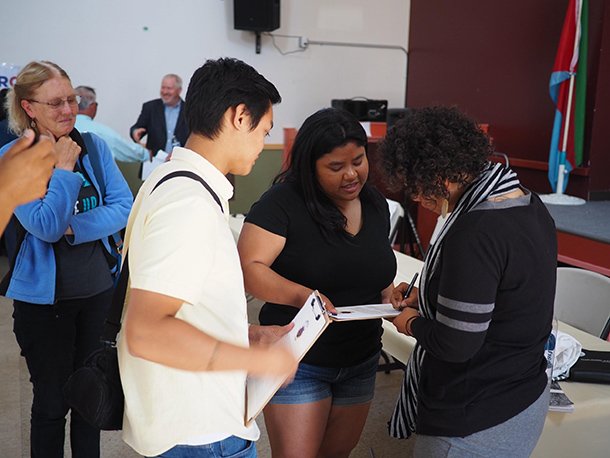 Savannah Son is a second generation Cambodian American whose family resettled in the U.S. following the Cambodian Genocide and the fallout from the Vietnam War. She is the current Khmer Student Association of the University of Washington (KhSA UW) President and an intern at Formerly Incarcerated Groups Healing Together (F.I.G.H.T.), an organization that advocates on behalf of and provides reintegration support for incarcerated community members returning to society.

Under the helm of Savannah, KhSA has stepped up campaigns to raise visibility and create awareness within the public sphere of who Cambodian Americans are. Some strategies include film screenings, activities fostering engagement with other cultural clubs, and direct engagement with policy makers and politicians.

During the Seattle mayoral campaign season, Son and fellow club members were present at mayoral candidate forums to highlight UW’s plan to axe Khmer language classes. They succeeded in making it a talking point during the debates and even got some of the candidates’ signatures of support. In the fall, they sat in a meeting facilitated by ACRS executive director Diane Narasaki with incoming UW Regent Blaine Tamaki to once again highlight this issue.

Another strategy the club pursued was to hold film screenings with panel discussions. In September, KhSA hosted a screening of First They Killed My Father, a movie based on a book written by Loung Ung about her life experience during the Cambodian Genocide. Loung Ung teamed up with Angelina Jolie and filmmaker Rithy Panh to create the film which was released on Netflix in September 2017. A panel discussion was included as part of the screening to give the audience direct access to discussions by people who experienced the genocide themselves.

Through her work with KhSA and F.I.G.H.T., Son hopes to raise awareness of the plight of a refugee community that has so often been lost in the American narrative.

International Examiner: Who are you?

Savannah Son: I’m a senior at UW studying English and American Ethnic Studies, I am a first generation college student, second generation Khmer American. Right now, I’m not exactly sure what I want to get into, but I do know that issues concerning incarceration and the school-to-prison pipeline are close to my heart. So, whatever I do I hope I can continue working on that.

IE: How are you working towards that?

SS: I’m part of the Khmer Student Association [of UW] and it’s a club to support Khmer students on campus. Most of us are first generation students, and that experience coupled with being students of color – being Khmer students specifically – comes with its own complications and its own struggles. So, we’re really just about creating a community that’s supportive and inclusive. We also like to raise awareness about Khmer culture, the Khmer community and the various issues we face.

Through programming, we do a lot of community events but we also do educational sections, we dedicate part of our time during our meetings for a cultural lesson and a political one, this includes social and academic support services.

I just recently started interning for F.I.G.H.T. It stands for Formerly Incarcerated Groups Healing Together. It’s been a really great learning experience, I’m learning a lot about community organizing which I think is something you can’t really learn through a textbook.

SS: Yeah, it’s kind of interesting though, because I work at the [Ethnic] Cultural Center (ECC) [on campus]…that means that my network is a little bit more expanded because sometimes when you’re part of a cultural club [like KhSA] you get really into your enclave and into your bubble. [Because of working at the ECC] I get to meet and talk to people outside of that bubble… It still kind of surprises me meeting people that don’t know about the issues that we’re facing right now just because I’m surrounded by it constantly, it’s a good reminder that we are very underrepresented, that people still don’t quite understand the difference between our experiences and maybe the experiences of other Asian ethnic groups that have [or] have been here and have been established here in Washington and here in America for a longer time. They don’t understand our history as a refugee community and the implications of that especially when it comes to college access.

IE: What are some issues in the Cambodian American community you are working toward addressing?

SS: Thinking about my own lived experiences, mental health is a huge issue in our community. Sometimes, when I think about, especially for those who are second generation… there’s definitely a lot of undiagnosed PTSD in the community but also mental health in the younger generation. We hear stories about the ways that our families have struggled, and we see that, and we think that that’s what life is supposed to be like; it’s supposed to be hard and in some ways you’re not supposed to be happy all the time or happy at all because you’re always focused on living day to day or living from one crisis to the next. And because of that, people are afraid to get help or [are] afraid to ask for help so I think that one of the biggest issues.

Incarceration and deportation are issues that our community really internalizes. From my own experience, my family just internalizing what it meant to have family members incarcerated, it was just something that they felt was a failure on their part as a family unit when really it’s about the different causes, systemic causes, that create an environment where being incarcerated is a route. I feel that for other people, that’s not normal for them, they don’t know anyone who’s incarcerated.

IE: Do you speak and/or read or write Khmer?

SS: No, I think that for a really long time that to be Khmer is to speak Khmer but then growing up not speaking Khmer fluently meant that I always struggled with the idea of identifying and it also meant that there was always a big language barrier between me and my family that I felt like would never be bridged. I think part of being the children of immigrants, you just find ways to adapt and now I actually embrace the fact that I struggle with speaking the language and am no longer embarrassed or ashamed about it. It’s just something that I have difficulty with. So I find that the older generation is actually a lot more receptive to that, to me wanting to express the fact that I don’t speak Khmer but I really am trying to learn. But I think for other people it definitely causes identity struggles.

I know that there is a Southeast Asian recruiter at UW, and he does make an effort to connect with KhSA, which I really appreciate but I think building solidarity across all the different cultural groups can be really difficult if people. I find that that’s the experience that we have. That’s why we’re looking to do more than just community events but campus community events just to connect more with different cultural clubs. There’s definitely an issue of representation.

As for resources, the people that know about us and work with us who are not a part of the administration do their best to support us.

IE: What are some goals you have for KhSA this year? For F.I.G.H.T. that you want to accomplish? For yourself?

SS: My vision for KhSA is…to develop a better way to outreach to more high school students to encourage them to go to college. We have a scholarship open to all high school seniors in Washington of Khmer descent, but I would love if KhSA was able to develop some kind of mentorship program that allows our members to foster relationships with more Khmer youth. Maybe even organizing a conference that allows high school Khmer students to convene on a college campus and learn more about the community and their identity.

As for F.I.G.H.T., I envision us establishing a healing circle with the families of incarcerated API peoples. I think there is still a huge stigma attached to incarceration and as a result, families feel ashamed or isolated. I think a healing circle with the families would help de-stigmatize incarceration and also aid in de-criminalizing our communities. Incarcerated people are people with loved ones too and I think that’s important to remember.