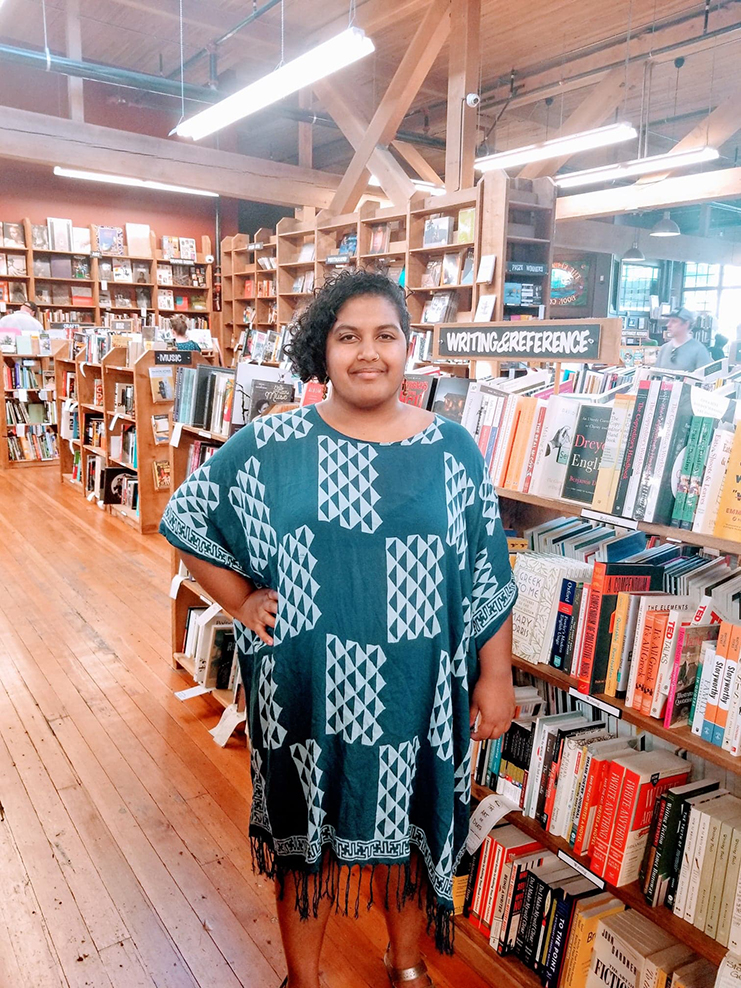 At 27 years old, Jordan Alam has built a solid resume thus far in their life, the kind that takes decades to build — social activist, writer, performer, facilitator and counselor, therapist in training and advocate for ending all forms of discrimination. And they are still going strong. At a local bookstore in Capitol Hill, Alam talked about their values and goals, the inspirations behind all the work that they do, and what drives them to keep advocating.

Alam was born in Bangladesh and came to the United States when they were one year old. At an early age, Alam was able to identify themselves as a queer individual and is now a spokesperson and advocate for their community.

Last year, at a Town Hall Seattle event that featured Queer and Trans People of Color artists, they performed pieces about body memory and a series of how the body holds its stories. Alam’s piece was mostly about sexual assault and how a traumatic experience like the one they had in the past can affect someone’s life moving forward.

They have worked in survivor services for a long time and around people who experienced trauma — New York Asian Women’s Center, on their college campus, at the YWCA, and also as a birth doula. These experiences and have found their way into their performances, writing and dedication to advocating for their community.

“I have worked at all these spaces where people that have been harmed are now going through new life experiences; whether that means coming into a shelter, or seeking counseling for their experiences, or when they are pregnant and giving birth – those can bring up a lot of those same kinds of feelings of violation,” says Alam.

Alam is a currently a graduate student in a social services program at Smith College in Massachusetts, and splits their time between Seattle and Massachusetts as they work toward the goal of becoming a therapist. What Jordan works toward in their lifetime is the idea of ending discrimination of any kind, so that people are treated the same, basically based on their characteristics rather than their identities. Their goal is to end discrimination while providing for everyone’s basic needs.

With all of this going on in their life, not to mention finishing up a novel, Alam found time to sit down and catch up.

Growing up and coming out

“I think something that for me, and maybe this is a thing about the LGBT community specifically, but I am less interested about the ‘coming out’ narrative as I am about the ‘inviting in’ narrative,” Alam said. “Only the people that I care the most about [are] who I am going to announce that to; I don’t need the whole world to know. But I feel like it was important for my dad to know, and for my sister to know. But some parts of my family don’t know, and that’s okay. My family has been accepting, and if anything, my dad was mostly worried that I would be harmed by other people because of my sexuality, and just wanted to make sure that I am safe.”

Being a queer person in the world today

“Queerness is not super new on the scene; it is actually quite old. As old as humanity. We are now in a rich place to be able to have the exposure so that we can do more historical studies like in ‘Queerness in South Asia’ or like really interesting activist work that is happening. We can piece all these things together whereas I think that people in previous years were maybe more isolated or had more pocket communities that then were not recorded about.”

“That is something that I think is actually really delicious about this time, is that there is this ability to hear about other people’s experiences and have a more expansive view on what things are like.

“And, on the other hand there’s still all these potential harms. I think that is sad that people only hold the depressing stuff, but it also is true that hate crime rates are up – even in the city of Seattle.”

Being LGBTQ and Bangladeshi American in Seattle

Alam said they feel they’re in a very unique position, due to growing up here and being isolated from an enclave community of Bangladeshis. They explained that the Bangladeshi-American community is really new in the region. Up until fairly recently, there were a maybe around 500 Bangladeshis who lived in the Kent area, but a very recent wave in immigration has brought that number up.

“What I hunger for is a more visible queer community or people being able to share their narratives without all the punishment that is associated with that. But I don’t think that is any more unique amongst Bangladeshis than any other immigrant communities, especially any Asian community around us.”

“Recent transplants to this city have a different kind of community space than people who have lived here for a while. There are not a lot of ‘native Seattleites’ left as that is now a very small group and spread out in different ways, and there are things that attract them that are different than what attracts newer folks to this area. The question is, do they want to relate to me, and do I want to relate to them? Communities they are coming from in their home country, I am not sure if I necessarily fit.”

The novel is about three young Bangladeshi American women who are returning to their mother’s home in Washington state. The mother passes away early in the story, and she has left items in her home which the daughters sift through and discover a very different life that she had – one that she had not exposed to them. Through those objects, the daughters learn about this whole other reality that the mother experienced. They hope it’s ready to send to publishers by this fall.

“It will have taken me lots of years; I had the germ of the idea in late college, so five or six years ago, but I really got moving forward when I moved to Bangladesh for that year and was doing the research,” Alam said. “So I had a preliminary thing that I threw in the trash, and for the last three-ish years I have been committed to this version of the manuscript.”

It was during college that Alam picked up on a lot of their skills surrounding facilitation and counseling. They worked with queer Muslims in and out of college among other groups and they facilitated conversation around feminism. In the next year, Alam will work with veterans on the topic.

“That community particularly (struggles due to) the ways in which men are not able to access emotional health,” they said. “They are ashamed for anything other than stoicism, so I think that feminism encompasses that also.”

“I believe that feminism has a larger space and definition…it benefits all people. Men need feminism too. If we restrict feminism to being only about “capital W Women”, especially white women, then we don’t get justice for the whole population of the world. If you think about it, sexism is affecting everyone, by limiting some people’s options and also making it impossible for others to (if they have more privilege) express their emotions or access services or whatnot. It hurts everybody, even if you are in a position of privilege relative to someone else.”

“There are complications within that but I don’t think feminism is specifically about cis women only and if it is, it is failed. That is how I feel.”