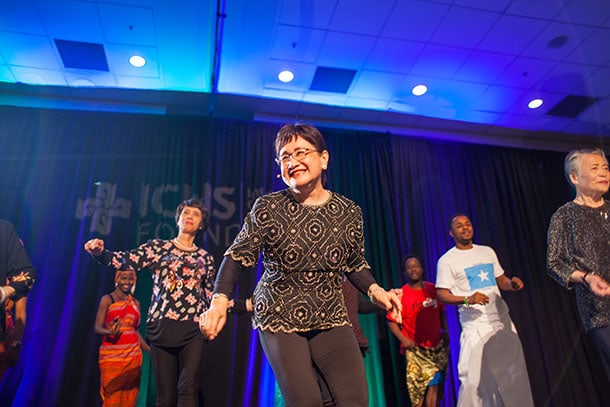 Seattle’s Angela Wan is the runner-up in the staff category for AARP’s 2018 Asian American Pacific Islander (AAPI) Hero Awards. Her nomination and the support she received from the community reflects the years of support she’s given as a familiar figure in the International District, where she works for International Community Health Services (ICHS).

On top of all that, she serves food to older Asian Americans who are homeless twice a month at a local shelter.

And she finds innovative ways to keep older Chinese healthy. Since 2009, Wan has taught line dancing classes that don’t just get seniors – some of whom suffer from dementia and Alzheimer’s – moving, but also support improving their memory, coordination and socialization. In May, the ICHS line dancing group under her guidance, including several 90+-year old participants, performed at ICHS’s Bloom Gala annual fundraiser and brought down the house.

Wan, who was born in Taiwan, has lived in Seattle for 41 years. The majority of the people she serves is in the Mandarin and Cantonese communities. She points out there’s a Chinese residential district next to Chinatown, and that Seattle’s International District has a lot of senior housing, which keeps her busy.

“Actually, I engage with about five or six senior housing (developments),” she says. In September, ICHS hosted a community health fair that about 150 seniors attended.

“The community kitchen once a month at the community center we average about 60 people,” she adds. She uses these events as an opportunity to teach about healthy cooking and eating. “I do the cooking demo and our team does the cooking inside the kitchen. I do the demo in the lobby in the front, in a wok. I usually have a little talk. I have recipes in Chinese and English.”

“I talk about the ingredients and nutrition and their effects on your health and why you need to eat this kind of food.”

She’s relentless in her educational role. “Yesterday, I had a community medical outreach, at Uwajimaya and I talked to them about healthy eating.”

Wan’s background is in sociology, and after she immigrated to the U.S. she worked at SeaTac airport, as an interpreter for 19 years, helping Chinese travelers and immigrants. She had to learn Cantonese for the job. “I spoke very little Cantonese but my husband is Cantonese so I picked it up,” she says.

She began to volunteer for the Tzu Chi Foundation, doing charity work in the Chinese community. Tzu Chi was one of the volunteer groups under the ICHS umbrella. About 14 years ago, she was laid off from her immigration job, and she started at ICHS when someone was out on maternity leave. After three months she was hired on permanently.

She’s been teaching American line dancing for the older Chinese for nine years. She didn’t consider teaching Chinese dances. The dancing came out of her insistence that people need to exercise. “They said ‘Mrs. Wan, you keep telling us we should exercise so you should open up an exercise class.’”

The exercise class became a line dancing class that she co-taught with a friend, and when her friend moved back to Taiwan she took it over. She’s always kept the dance American-style. “I don’t have time to look for Chinese folk dances,” she admits. “Once in a while, I have Chinese music, but it’s mostly American music.”

The dancing isn’t just for her community, Wan says. “I enjoy it because it forces me to exercise. I always tell my group, we are forever young as long as we keep dancing, stay happy, and be healthy.”