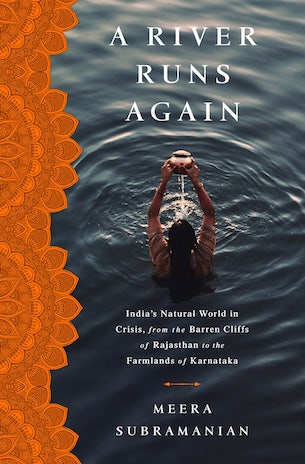 In A River Runs Again, Meera Subramanian explores the progress India has made, her attempt to preserve natural resources, and the environmental challenges involved in it. Although based in the United States, Subramanian, a journalist, has a personal connection to India through her father’s side and her extensive travels there. Clearly written and filled with anecdotes, this book offers a compassionate understanding of the country and a hopeful vision for the future.

Subramanian read at Elliott Bay Book Company on November 3. I conducted an interview with her via e-mail prior to her arrival.

Bharti Kirchner: Dwelling on a lack of sustainable development in India, you say, “It is only a matter of time before even the most comfortable of countries will face similar circumstances.” What do you think are some possible consequences for the U.S.? How can we prepare ourselves?

Meera Subramanian: There’s evidence we’re already facing these environmental pressures in the U.S., from wildfires to mudslides. I explored whether India can sustainably develop in a way that works for both human communities and the natural world, but the inquiry is just as important for America as we face a crumbling infrastructure that demands answers about how we want to develop, too. The best way to prepare is to support local efforts that work in collaboration with natural systems, instead of against them, and that are designed to work for the long-term.

BK: You have given many anecdotal evidences of individual farmers embracing farming without the use of chemicals. This practice, though commendable, entails higher labor costs and the yield is often lower. If farmers throughout the country adopted this practice, will it produce sufficient food to feed the nation? Also how do you foresee the agribusiness counteracting their loss of influence?

MS: You’re right that hearing the stories of organic farmers is only one part of the picture. I turned to hard science to try to contextualize what I was hearing on the ground and found some hopeful indicators. Research shows that even if fertilizer application is greatly reduced, yields can remain as high as intensive petrochemical agriculture, as long as other sustainable practices such as cover cropping are implemented. And the soil comes back to life, less vulnerable to drought and erosion and able to capture more carbon. There will be pushback from agribusiness, which loses out on global market worth billions of dollars, but it’s the farmers who are paying now. As for the question of organic farming requiring more labor, I am reminded of the words of one farmer I met who said, “India’s population is her strength. Think what we can do.”

BK: You touch on an important point when you suggest that water in India and many other places in the world is a woman’s issue. Please share more thoughts on this.

MS: I traveled to many parts of India and it is women and girls you see encircling wells to fill their vessels or balancing heavy loads of firewood upon their heads. Much of the tough physical tasks of managing the home fall, literally, on females. To tackle development lags in many ways is synonymous to addressing women’s rights.

BK: You talk about the rise of the girls in India, their questioning the ancient patriarchy, and the support they’re receiving from their fathers and brothers in this regard. You recommend co-education and you see the possibility of “self-independence.” Could you speak more on this?

MS: I wrote extensively about a young woman, Pinki Kumari, who used that phrase “self-independence.” She found her own when she was 16 and respectfully resisted her family’s pressure to marry her off. She pleaded—in a note she slipped into her father’s pocket—to stay in school so that she could continue her education, and her father supported her decision. When I met Pinki she was providing reproductive health trainings to teenagers with Pathfinder International, which found that its trainings were most effective when given to co-ed groups. Breaking some of the taboos by providing straightforward information in a shared environment seems to open up paths of communication. Girls definitely were finding their voices and boys were perhaps learning how to listen to them.

BK: You speak about India coming up with its own form of self-government. You say, “Growth could be guided by environmental self-rule.” Please elaborate.

MS: India’s independence movement was based on the concept of Swaraj, self-rule. When achieved, Indians created their own form of democracy, intrinsically Indian and not just a replica of the Western model. The question now is whether she can also develop her own Eco Swaraj, a model of development that is based on sustainable strategies that turn to small-scale, agile systems for energy, food, and water instead of just replicating the macro models of big power, industrial agriculture, and mega dams from the past, which accepted a ravaged landscape as the necessary price to pay for development.

MS: I tend to drown myself in information, from excessive reporting to extensive background research. Then I try to dig myself out through the process of writing and rewriting. The first stages are always incredibly messy! It’s like being immersed in the middle of a three-dimensional puzzle. Slowly the pieces fall into place. There was also a lot of caffeine involved!