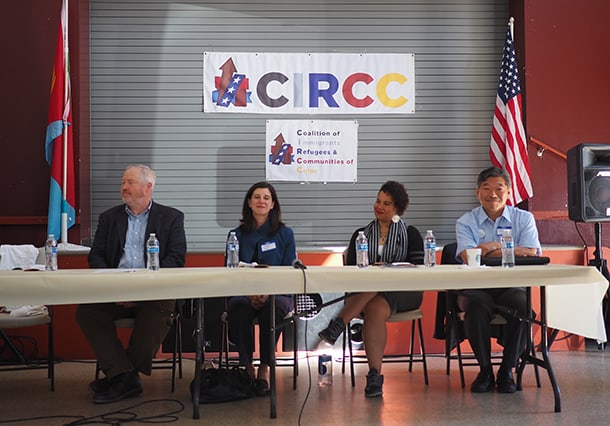 Before current Mayor Ed Murray ended his re-election bid, Oliver was his only viable challenger. Since then, the field has expanded to include 21 candidates. This election is the first open seat contest since 1997, when incumbent Mayor Paul Schell was unable to make it through the primary.

As a condition of invitation to the forum, each candidate spoke to CIRCC within 60 days of the election.

In between the two segments, the audience and mayoral candidates were treated to a huge spread of Ethiopian and Filipino dishes and Classical Khmer dancing by the Des Moines Dance Troupe.

Topics included city-specific issues, such as growth and its effect on affordable housing, the opportunity gap in education, and access to the right resources for jobs, as well as national-level issues such as police and community relations, police use of deadly force, how to best address immigration, and each candidate’s plan to work with the White House on these issues. The audience included members of the Vietnamese, Eritrean, Filipino, and Cambodian communities.

With the shooting of Tommy Le by King County Sheriffs and Charleena Lyles by Seattle Police still fresh in people’s minds, one of the first topics discussed was police and community relations. “The community deserves the opportunity to be a part of the investigation,” said Oliver. “The CPC [Community Police Commission] has 21 members, and we need at least half to represent communities of colors, LGBTQ, and low-income communities.” Oliver also called for a new head of the Office of Police Accountability (OPA), and criticized current OPA head Pierce Murphy and Seattle Police Chief Kathleen O’Toole for being absent from a recent Town Hall for Charleena Lyles. “I believe it is their responsibility to show up to hear the communities voices,” Oliver said.

When asked if he would support updating the language in state law to simplify prosecuting law enforcement officers when deadly force is used, James W. Norton Jr., a current Seattle Police Officer, said: “We set them up for failure — we need better mental health training for our police officers.”

Touting her work in implementing changes within Seattle Police in line with the 2012 Federal Consent Decree, Jenny Durkan said she would support updating language in the state law.

The topic of immigration expanded to address racism and inequalities within the city. Former Mayor Mike McGinn said he would make sure the city government reflects the diversity of the city. “When you get to policy in any city; whether it’s taxes, housing, transportation, racism is at the bottom, it’s at the bottom of every story in America,” he said.

On the subject of ensuring equity among all communities in the city, many of the candidates presented strategies around zoning changes, finding ways to align wages with the cost of living, and creating more affordable housing. “We have to have a strategy that says we can have all our moderate earners and low-income earners living in any neighborhood,” said Oliver. To achieve these goals, candidates suggested getting large companies in the city to help employees, programs supporting child care and transportation, reallocating dollars within the city’s budget towards programs that support lower-income communities, and implementing impact fees to new development within the city.

Education was also discussed, with some candidates addressing where they stood on Mayor Murray’s Education Action Plan. Murray’s plan includes a list of 18 recommendations for improving academic achievement for low-income students and students of color.

“What the city can do is provide necessary support for the students and their families,” offered Hasegawa. Farrell echoed that sentiment. To help communities address educational inequities, “the [Parent Teacher Student Association] is the place to allocate funds,” she said.

At the forum, the Khmer Student Association of UW (KhSA) was collecting signatures for a petition to fight planned cuts to Khmer language classes at the University of Washington. During one of the audience-led questions, KhSA asked how each candidate would help preserve foreign language courses. The candidates who answered all agreed that a combination of coalition-building, as well as leveraging the mayor’s position when negotiating with the University of Washington, would be an effective strategy.

Farrell also pointed to her work as a state legislator in attaching an amendment to the 2015 Washington State Transportation package that could help address these type of funding disagreements. The amendment, titled, “Puget Sound Taxpayer Accountability Account” allocates $500 million towards helping fund K-12 and higher education programs for underserved communities.

CIRCC organizers expressed hopes that this forum will help build a space where minority communities can engage with politicians. “This gives communities of color firsthand exposure with candidates running for mayor, establishing a relationship and dialogue,” said Clarence Gunn, one of the principal organizers of the forum. “Our big thing is about voter engagement — a lot of people are registered voters but don’t vote.”

Bereket Kiros, another coordinator added, “We need more ongoing dialogue with political figures. They only way we can address inequities within communities in the cities is through the political process.”