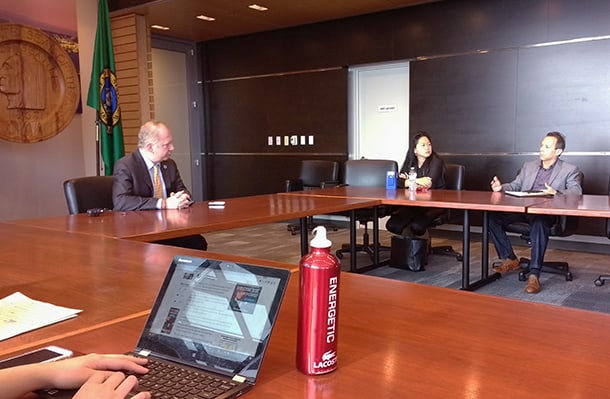 Starting March 31, Mayor Ed Murray wants Seattle to be known as a “constitutional,” rather than a sanctuary city. Seattle’s policy of helping undocumented immigrants resist deportation means it’s simply following the 10th Amendment to the Constitution, which specifies that the federal government can’t tell local jurisdictions how to enforce federal law—such as how to use their police departments—and can’t punish a local jurisdiction by withholding federal funds.

Murray explained this at a roundtable discussion for ethnic media at City Hall, two days after he announced that Seattle is suing the federal government for its threats to cut funding to such cities. The roundtable included journalists from media outlets representing Korean, Chinese, Japanese, Filipino, general Asian American, Latino and Somali communities. The half-hour Q&A focused mostly on Seattle’s status as a “constitutional” city and the growing homelessness problem, but also touched on how homelessness is affecting the Chinatown International District.

Seattle’s lawsuit last week against the Trump administration argues that it’s illegal for the federal government to withhold federal funds over immigration, and tell local police to assist in deportation. In addition, Seattle wouldn’t be able to help the federal government even if it wanted so, as City agencies such as the police department, public schools and city services don’t ask for immigration information.

Murray explained that there’s a moral component to the lawsuit. “The reason we need to do it is not simply because it’s illegal, but because we have families that are living in this city, people who work in this city, children who have mostly spent their entire lives in this city, can’t remember any other country—who are at risk of being torn apart,” he said.

And despite the Trump administration’s claims that mass deportations will make the country safer, Murray said it will do the opposite. South Seattle, which has the highest population of immigrants in the city, has seen a drop in crime.

“The thing we are concerned about is, by basically scaring people away from the police department, that crime will go up. In some cities we’re already seeing immigrant communities are stopping their reporting of domestic violence or of rape. That makes a city very dangerous.”

In response to the federal government’s increase in deportations, the City has launched programs to educate immigrants on their rights, on how to organize their paperwork, and how to keep their families together.

And though Murray said he believes Seattle will win the lawsuit, he stressed that this is Seattle’s only way of challenging the federal government on immigration.

“The last time someone used local forces against a national government was during the civil war,” he said. “Should they choose to come in here and remove people all we can do is resort to the courts.”

It’s not just the threat of federal funding cuts connected to immigration that worries Murray. Apart from the debate over sanctuary or constitutional cities, the federal government’s budget cuts will result in less funding for affordable housing, healthcare and the environment in Seattle. This would disproportionately affect people of color, immigrants and women, Murray said, and “would translate into fewer services and quite honestly, fewer jobs.” When these cuts come, the City is looking at how to cut its own budget and which funds to prioritize, according to the mayor.

Nevertheless, Murray said Seattle can serve as a model for the nation. “We have a long haul ahead of us, but I actually think as dark as it seems, cities like Seattle are actually showing the way forward,” he said, pointing to issues like raising the minimum wage and funding pre-K and affordable housing. “I think we are modelling for the nation how we can actually function when Washington D.C. can’t function.”

Homelessness is growing exponentially across not just Seattle but King County, the state and the nation, Murray said. While the City continues to try and connect people with addiction and mental health services and create more affordable housing, the problem is inseparable from issues of income inequality and affordability.

A major challenge, he said, is the lack of an income tax in the state that could help pay for more solutions to homelessness. “Jeff Bezos is very rich—there’s a lot of rich people here, but we the City don’t have any way to tax them unless the state decides we’re going to go to a more progressive tax system.”

And on the national level, the federal government continues to cut funding that would help alleviate homelessness. “Even under the Obama administration we lost about 12 percent of our affordable housing and homeless money,” Murray said. “That money isn’t going to come from any place else—the federal government is not going to step up. So the cities are going to have to decide if we want to limit this problem or not.”

The City will also have to step up when it comes to funding light rail, Murray said. The only way to pay for construction of 28 more light rail stations, “and be a city that truly has transit,” will be sales taxes. “Some people are complaining it’s taking too long to build. Well the only way we can build it faster is to raise more taxes and I don’t think people want us to do that.”

Assunta Ng, publisher of Northwest Asian Weekly, asked how the City could better clean up South Dearborn Street in the CID, an area which has experienced a growing homeless population. Murray said the City is clearing homeless encampments one at a time. The Field, an encampment under I-5, was recently cleared, and The Jungle encampment is also empty. The City will clean the CID as well, and the City is also increasing garbage pick-up city-wide.

“We’re working our way there—we’re systematically going through, we’re offering people services, when they don’t take them we move them, and then we go and we clean it up,” he said.

However, some of the property in the CID is controlled by the state, which needs to continue doing its part, Murray said.