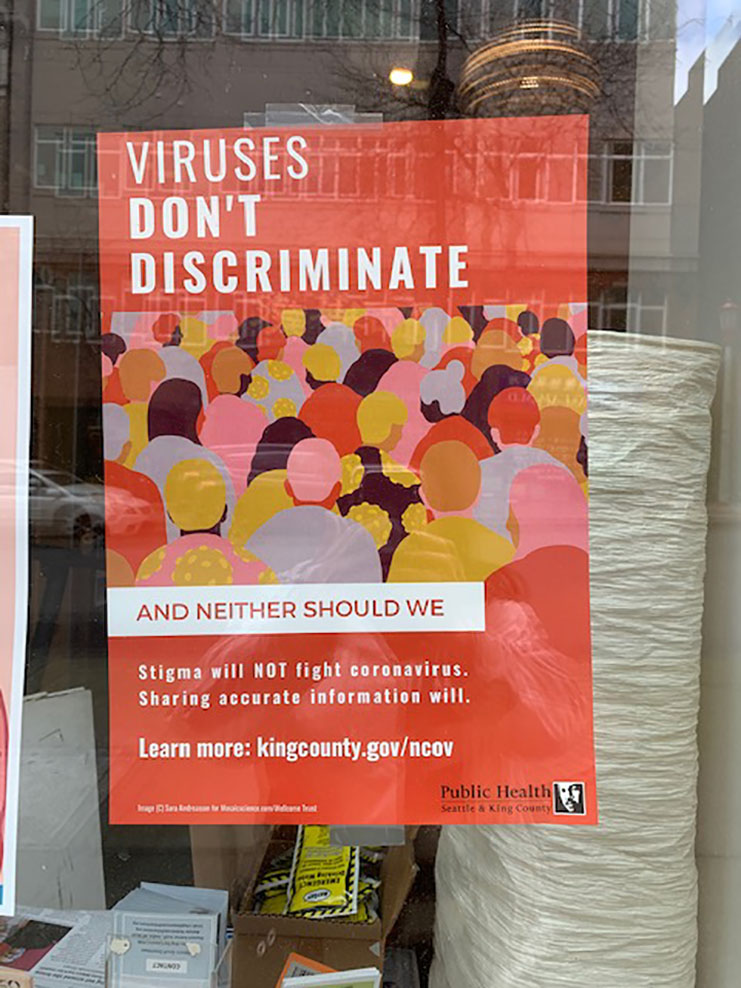 On Wednesday, February 26, Mayor Jenny Durkan and her cabinet treated around 70 members of the Chinatown-International District to lunch at Honey Court to show solidarity and support at a time when Chinatowns and Asian communities and businesses across the country are facing stigmatization due to COVID-19. The crowd included members of the Mayor’s cabinet, community leaders, business owners and workers, community media and others.

“When we see things like the coronavirus spread, and we see misplaced fear and we see business at some of these great businesses drop off, I say ‘no’,” Mayor Durkan said in her opening remarks to the crowd, noting it was her third visit to the CID that week. “The City of Seattle stands with you, we are happy to be here,” she said.

CIDBIA executive director Monisha Singh told KOMO News on February 11, before any cases of COVID-19 were discovered in the state of Washington, that businesses were already feeling the impact of bias and discrimination toward Asian owned businesses and the CID neighborhood. “The words they’re using are very targeted and biased. It’s very frustrating but also concerning. This is our businesses’ livelihoods. To have a perception of them, that’s not accurate, is not fair,” she told KOMO News.

They worked with community partners — ACRS, CISC, ICHS and others — to hold a press conference on February 11 to urge the public to know the facts about the coronavirus, not to stigmatize individuals and families from particular groups, and to speak out against bias and harassment. “It was quite troubling that we were seeing the othering and blaming when we hadn’t actually seen a case in King County,” said Valenzuela.

Seattle King County Public Health also created an anti-stigma toolkit that is available on their website and works to combat bias and discrimination, misinformation and harrassment with messages such as “Coronavirus doesn’t recognize race, nationality, nor ethnicity” and “Speak up if you hear, see, or read misinformation or harassment.”
Over the course of last weekend, the first case of coronavirus was found in a patient in King County, and since then, the number of cases in Washington state has increased. On Monday morning, March 2, Seattle King County Public Health said in a press release, “COVID-19 test results have come back from the Washington State Public Health Laboratory confirming four additional cases of COVID-19 in King County residents. With these four new results, the total number of cases in King County is ten. Today’s results include an additional death, bringing the total number of deaths in King County from COVID-19 to two.” [This was at the time the International Examiner went to print. These numbers will have changed.]

Singh said in an email on March 2 that the CIDBIA hasn’t had a chance to assess how the CID business community is doing after the news from the weekend and today. “I did talk to one business who said that sales were down on Saturday after the first death was reported,” she said. “They also said they will continue to see an impact as schools and offices close. As people are staying home to take care of children or telecommute, there is a trickle-down effect to restaurants, especially during lunchtime.”

In a press conference on March 2, King County Executive Dow Constantine announced that he signed an Emergency Declaration on Sunday which would allow for more resources to immediately move into a new stage to managing a coronavirus outbreak.

“We have been prepping since we first learned of the outbreak in China,” said Mayor Durkan last Wednesday at the lunch. “We started planning from the beginning because while we hope that we won’t have a significant outbreak here, we have to plan as if we would. Part of that, though, is that education is critical, because if there’s not education and a good public campaign, people will fill the void with their fear. And we have to make sure that doesn’t happen.”