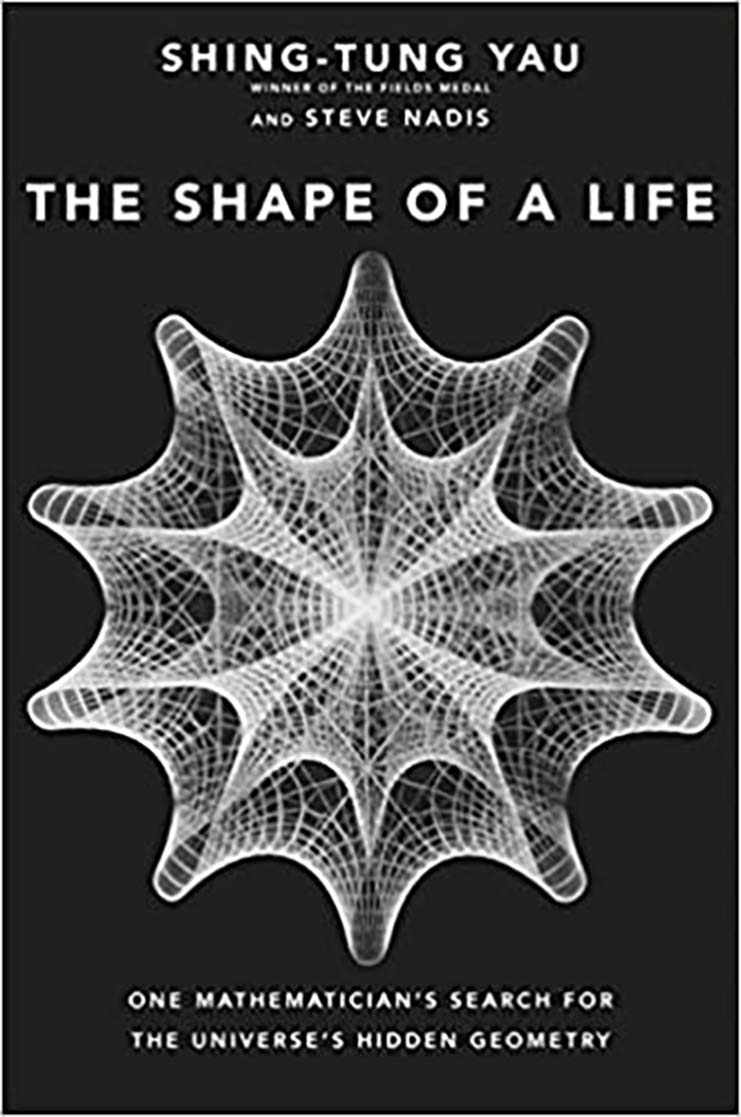 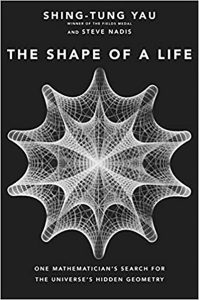 The Shape of a Life: One Mathematician’s Search for the Universe’s Hidden Geometry
By Shing-Tung Yau and Steve Nadis

“Having no prior experience in committing the story of my life to the printed page,” Shing-Tung Yau (the William Caspar Graustein Professor of Mathematics at Harvard University, winner of the Fields Medal, the National Medal of Science and a MacArthur Fellowship) begins chronologically. It helps to know that Yau has made significant contributions to mathematics.

Yet “the beginning” of The Shape of a Life is the most moving part of this autobiography and may be the section that readers unfamiliar with math connect to the most as Yau chronicles his impoverished childhood as the fifth of eight children in China. Here, the first person who begins to “shape” Yau’s life is his father, whose “early training [with him] sparked an interest in Chinese history, literature, and poetry.” After his father’s early and sudden death, Yau “began to read some of the philosophical books in my father’s collection…I was aiming to get a better grasp of what my father liked to think about.”

So many people come into Yau’s life. As we discover more about his mother, classmates, teachers and his resourcefulness in learning from books, a fuller sense regarding Yau’s way of approaching a problem emerges: “he is always trying to understand [its] historical context. Knowing what came before, I’ve found, can often provide clues as to what the next steps ought to be.” This philosophy is carried throughout the book as Yau moves from China to San Francisco and Berkeley for college to his current professorship at Harvard University.

Throughout The Shape of a Life, Yau’s fascination especially with geometric analysis comes through as he works hard, fails, and tries again, although sentences like “two-dimensional compact surfaces that are ‘orientable’—meaning they have two sides like a beach ball, rather than just one side like a Mobius strip—can be classified by their genus” make for difficult reading with those with little background. A mix of photographs, diagrams, and (surprisingly) poems help but do not always succeed in giving a face to Yau’s experiences.

As Yau advances through his research, teaching, and aid in establishing six mathematical institutes in China and Hong Kong, there is much to admire. Yau has an interesting voice as seen in “a guy approached me at the airport, who I assumed was my prearranged driver, but when I got into his vehicle I found out that he had never heard of Argonne and had no idea where it was.” But the reader can get lost in academic politics as the author contextualizes his thorny relationship with S.S. Chern, the famous Chinese geometer, as well as with his dealings among peers and university politics as Yau’s reputation and influence grows in both the United States and China. Mentions of courtship, marriage, promotions, relocation, and children appear in a paragraph or two among his work in geometrical analysis. In these later chapters, hundreds of individuals—all documented in the index—are mentioned sometimes too briefly as the author attempts to condense his life on the page.

Like the proposed model of the Calabi-Yau sculpture (a three-dimensional rendering of a six-dimensional manifold) for Indiana University, the physical metaphor is multifaceted and lovely, but the shape may be too complex for a reader without the background to understand. Two lines from his poem, Ode to Space-Time, hint at the challenge to bridge such a gap: “Learning is but a peep into the vast unknown,/like dipping a cup into a boundless ocean.” 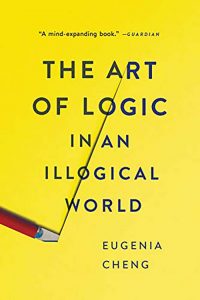 The Art of Logic in an Illogical World
By Eugenia Cheng

When I attended the Eugenia Cheng lecture at the Town Hall lecture on September, 2019, her question “wouldn’t it be helpful if everyone were able to think more clearly?” resonated inside me. This energetic speaker was on a mission: “We live in a world full of misleading arguments. Shouldn’t our aim be to achieve mutual understanding?

I thought back to the last political discussion I’d witnessed and agreed with Cheng that “most arguments set out with the aim of defeating someone else.”

Many disagreements are structured along the simplistic lines of right and wrong. In her book, The Art of Logic in an Illogical World, Cheng emphasizes that “if people disagree it’s often a result of different points of view stemming from different beliefs.” Her argument is that the challenge is to be more intelligent by listening and being open to different perspectives.”

Math comes into the equation because it “isn’t just about numbers and equations: it’s a theory for justification. It provides a framework for having arguments and is so successful that in math people actually agree regularly upon conclusions.” As an individual uncomfortable with numbers, it was enlightening for me to hear that emotions and logic do not have to be enemies. “Math,” Cheng continues, “is not just about finding the right answer, but is about finding the sense in which things might or might not be true.”

Like a good teacher, Cheng breaks her subject into smaller parts like abstractions, gray areas, and interconnectedness. In diagrams, she unpacks a current news story about a United Airlines passenger being dragged off the plane to reveal how and why questions about the situation demonstrates “a complex web of causation and shows how oversimplistic it is to try and blame just one factor.”

An important clarification Cheng makes is that two people can be logical but disagree. It’s not about who wins but what is “illuminated”—in a flash of inspiration.

The most important points come late in the book after many misconceptions about math are addressed and redefined. Emotions, for example, “help us to arrive at logical justifications, if we closely analyze where our gut feelings are coming from…emotions shouldn’t supersede the logic—they should enforce it.”

By the conclusion of the lecture and book, I had a better understanding, but the question remains: am I using logic well? It takes time and clarity that one should be working towards to put this process into application. What Eugenia Cheng wants to see in the world is more good arguments. I do, too.