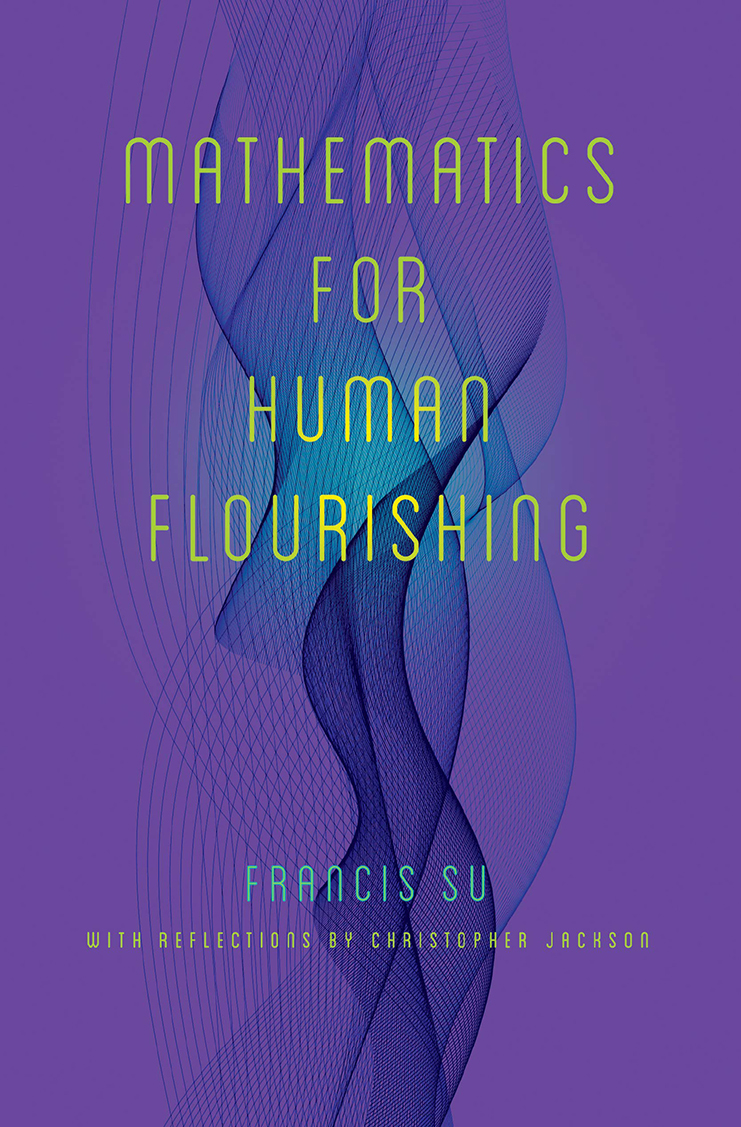 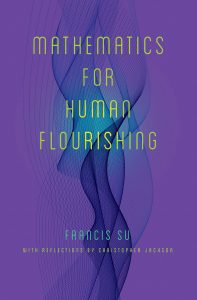 When I picked up Mathematics for Human Flourishing, I expected I would have to struggle. The last time I’d seriously “done” math was in high school for a trigonometry class. I don’t remember doing well. After reviewing Shing-Tung Yau’s memoir, The Shape of a Life, I managed to convince myself that it was good for me to see how a talented individual came to make such significant contributions to the field of mathematics. Fortunately, that book concentrated on the people who influenced Yau. Then there was Eugenia Cheng’s Art of Logic in an Illogical World, which made me see that the science of math made logical connections and realize how “math is a theory for justification.”

Francis Su’s Mathematics for Human Flourishing goes much further. This is a profound book aimed at a wide audience to begin a conversation on how to teach and engage with math in a new way. To arrive at “flourishing,” the author concentrates on what makes an individual a person of character.

Su begins by addressing a low point in his career when he’d been admitted to Harvard for his Ph.D. Feeling out of place because his college degree was not from an Ivy League school, he did not believe he would be able to flourish in mathematics if he was not like his peers. Su was even told by one professor, You don’t have what it takes to be a successful mathematician. This experience led Su to ask himself, Why do mathematics?

This heartfelt exploration is closely examined throughout the book. Su’s answer is that “math is intimately tied to being human. For then your deepest human desires reveal your mathematical nature—and you need only to awaken it.”

Su breaks down the idea of “flourishing” into 13 chapters ranging from exploration to play, to beauty, truth and community. While there is a process and linear progression, I believe that you could read these sections in any order to focus on what part of learning math would best enable you to “flourish.” It’s this type of connection that makes the book so applicable to a general audience, who might confess themselves as being “bad at math” or being victims of math anxiety. Math seems cold, logical and lifeless. Su argues, “No wonder we don’t feel a personal connection to it. No wonder we don’t feel a responsibility for how it’s used.”

To help us along the way, Su also introduces the reader to the case study of Christopher Jackson, an inmate in a high-security federal prison. Jackson didn’t finish high school and had an addiction to hard drugs that led to a string of armed robberies and a prison term of 32 years. In the form of letters at the end of each chapter, Jackson makes his own connections. In an example from the section on “meaning,” he writes: “Not only chiefly in math, but also over to how I view all areas of life…it’s like the creating of chess, where we take symbols (pieces) and give or create in them meaning (rules) and then see the relationships and interactions among them which create that universe…).”

My favorite chapter was on “struggle”—specifically the “struggle to grow,” a mark of human flourishing, in which Su reflects upon a cheating incident that occurred in one of his classes. Many students want a good grade, to be seen as smart and accomplished. It helps to hear Su say, “In my own math research, I’ve spent years thinking about some problems.” Su explains further that this productive struggle to try out new strategies, to be willing to take risks, and by being unafraid of mistakes and progressing incrementally in understanding the underlying ideas will produce a kind of endurance and competence to solve new problems. By building self-confidence and working over time, one will arrive at mastery.

Each section is roughly 15 to 20 pages long, with plenty of illustrations and examples as well as quotes from mathematicians like Simone Weil and Deanna Haunsperger to philosophers like Martin Buber and Kenneth Burke. These chunks of information to offer understanding and inspiration never overwhelmed this reader. The many resources to Mathematics for Human Flourishing—puzzles (with hints and solutions in the back), questions for further discussion, and extensive notes—also invite exploration.

As Francis Su reminds me, “Learn a bunch of separate mathematical facts, and it is just a heap of stones. To build a house you have to know how the stones fit together. That’s why memorizing times tables is boring.” I wish I had this book and a time machine so I could go back and rewrite my math history into new purposeful adventures.