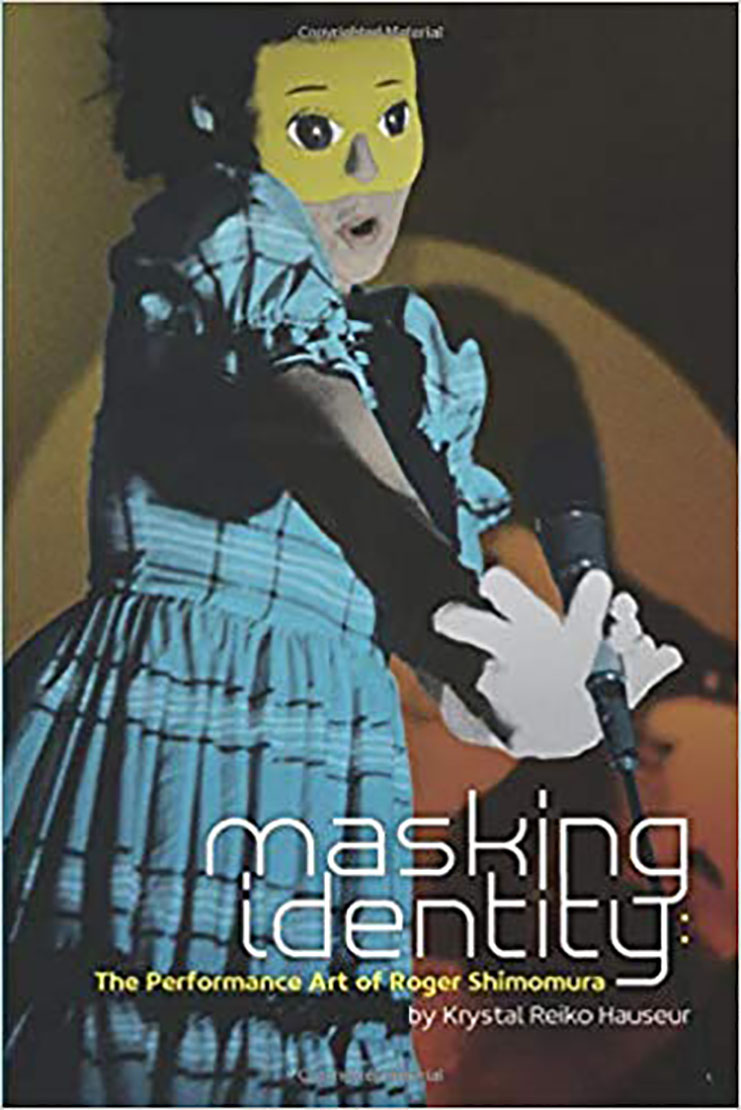 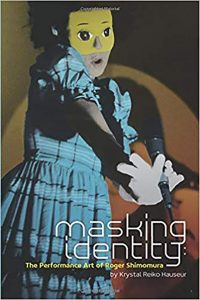 In 2005, emerging scholar Krystal Reiko Hauseur approached artist Roger Shimomura about focusing on his performance art as the subject of her master’s thesis in Art History at San Francisco State University. Shimomura was pleased to oblige, and then later, he returned the favor by approaching Hauseur to write a book covering his performance work in more depth. The result is Masking Identity: The Performance Art of Roger Shimomura.

Masking Identity catalogs 13 of Shimomura’s performance art pieces that were presented from 1984 to 2002. The book is loaded with images on almost every page and gives a sense of how Shimomura played with both American tropes and stereotypes about Asians and Asian Americans.

Shimomura’s performance art exhibits the accumulation of his training as a visual artist together with his experience taking part in “happenings” during the 1960’s, his studies in filmmaking, and his improvisational experiments with dancer and choreographer Marsha Paludan and her students at University of Kansas.

Shimomura’s first two pieces, Toku’s Dance, a seven-minute piece about his grandmother, and Seven Kabuki Plays Project, a seven-part series based on his grandmother’s translated diaries about her World War II experience as a Japanese person in the United States, were performed in Kansas, where Shimomura had taken a teaching position at University of Kansas. His later pieces branched out to be performed in other states, with his work ultimately being performed 51 times at 35 different venues around the U.S.

With the publication of Masking Identity in 2019, as Shimomura transitions toward his ninth decade of life, he was ready to praise Hauseur’s presentation of his work. “Performance is extremely difficult to write about without making the gist of the performance superficial and inadequate,” Shimomura said. “She is good at culling out reason from the performed work.”

Shimomura was also eager to talk about Andy Warhol and Pop Culture, which he cites as his biggest influences. “I find Warhol’s creative attitude all-inclusive,” he said. “He opened the door for Post-Modernism’s birth. He made it possible for almost anyone to be an artist, albeit not necessarily a good artist. He taught us that the deeper meaning of life might be in comic books.”

He also found inspiration from the California Funk ceramics artists, who suggested that everything is up for examination. “California Funk happened because the art scene was ready to be kicked in the butt for taking itself too seriously with abstract expressionism,” he said.

Shimomura found Pop Culture and California Funk to be complementary. “Pop was the east-coast version of the west-coast notion of Funk,” he said, and it was these two influences, combined with focusing on the subject of Asian American life, that gave Shimomura five decades’ worth of creative material.

Shimomura never shied away from political or sensitive topics. His later performance works ranged from California Sushi (1989), which took an autobiographical focus on Shimomura’s own life as an Asian American, to The Last Sansei Story (1993), which examined the Issei-Nisei-Sansei experience in each of three acts, to Amnesia (2002), which explored the systematic forgetting of the discrimination and violence against Asian Americans.

Although Shimomura has made his home in Kansas, he has returned to Seattle every summer for the past 50 years. His most recent exhibit in Seattle was in 2016, but he looks forward to the next. “I am scheduled at Kucera Gallery in about a year and a half,” he said. “I’ve become interested in small paintings and will attempt to have around a hundred of them for the Kucera show.”

Shimomura banters that his next plans on the horizon are to live long enough for his next show, but he appears to have more than that on his mind artistically. Thinking about the influence of Pop and Funk, he said, “I think we might be moving the opposite way, towards its own demise, or it might be time for another serious re-invention.”