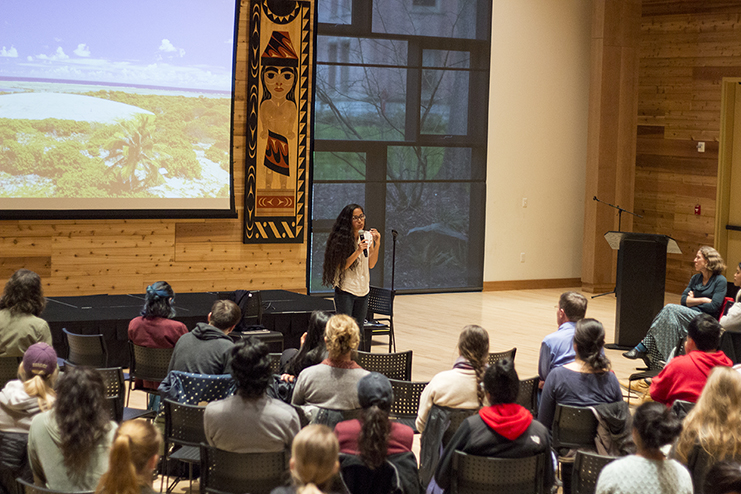 In 2014, Marshallese poet and activist Kathy Jetñil-Kijiner was presented with a high-stakes challenge: To write and perform a poem before the UN Climate Leaders Summit.

Instead, she decided to write the poem for her seven-month old daughter. “I thought, you know, I want her to know that there are people fighting for us.” Jetñil-Kijiner said the resulting poem, titled “Dear Matafele Peinem,” is the most hopeful one she’s written. In it, she reassures her baby that the sea won’t rise to swallow the Marshall Islands, and no one will be forced to become a climate change refugee. It ends with the words, “We won’t let you down – you’ll see.”

During her performance at the UW Intellectual House, Jetñil-Kijiner read from her first collection of poetry, Iep Jāltok: Poems from a Marshallese Daughter, which was published in February, 2017, and is the first published book of poetry by someone from the Marshall Islands.

Jetñil-Kijiner’s poems are often about many things at once. Her writing process often starts with extensive research, including talking to elders. She’ll often weave Marshallese legends, history and traditions into the poems, as well as science and statistics, and her own experiences.

As well as being an activist, poet and spoken word artist, Jetñil-Kijiner is a journalist and an educator who works as a specialist for Pacific Resources for Education and Learning, and directs the nonprofit Jo-Jikum. In an interview before her performance, Jetñil-Kijiner said art and poetry are sometimes the best way to reach people when it comes to the complex, difficult subjects she writes about.

Jetñil-Kijiner’s performance at the UW focused on two devastating threats to the Marshall Islands: Climate change and the legacy of nuclear weapons testing. The U.S. dropped 67 nuclear weapons in  the Marshall Islands during the 40s and 50s, the equivalent of one Hiroshima bomb every day for 12 years, and Marshallese people have dealt with the horrific consequences ever since.

Jetñil-Kijiner read a poem about high rates of cancer caused by this nuclear legacy, including her niece who who died of leukemia when she was eight years old.

Her poem “Monster” is about the trauma of Marshallese women who gave birth to children deformed by horrific birth defects as a result of exposure to nuclear radiation. It weaves this together with the legend of the mejenkwaad, a female demon said to eat babies and pregnant mothers, as well as her own own experience of postpartum depression.

UW student Cassiera Cruz saw Jetñil-Kijiner perform when she came to Cruz’s home island of Guam. Jetñil-Kijiner’s work can resonate with people in different ways at different times in their life, Cruz said.

“She just has this gift of sharing very sensitive and complex issues and transforming them into art and poetry that provokes empathy,” Cruz said.

Randizia Crisostomo, a UW graduate student and the Burke Museum’s community outreach coordinator for Oceania and Asia, remembers a professor showing Jetñil-Kijiner’s poem before the U.N. in class. The students were speechless. “We see compassion or relationships shared within our own families and our own communities, and just to see someone who’s sharing that on such a larger scale, I mean with the United Nations, and just talks about climate change and all of these issues, but also strengths that are coming forth from all of our communities, is what’s really important,” Crisostomo said.

Jetñil-Kijiner’s first project in 2018 involved sailing to the the ominous Runit Dome in Enewetak Atoll to film a video for a poem performance. The dome was built by the U.S. in the 1970s to encase 73,000 cubic meters of radioactive debris from over 40 nuclear tests on the atoll. Jetñil-Kijiner’s poem talks about the history of the island before it was obliterated in the blasts, and ends with the question: “Who gave them this power? Who anointed them with the power to burn?”

For Jetñil-Kijiner, the connection between nuclear testing and climate change in the Marshall Islands is obvious. “Our islands didn’t matter to the U.S. They could have tested in anywhere, but they decided to test it in our islands,” she said. “Ultimately, our lives didn’t matter…. With the looming threat of climate change, it’s the same issue again, where they’re thinking, these people’s islands could go underwater, but their lives don’t matter as much, so who cares if they lose their homes and they lose their islands? So in both situations, our lives are disposable — the Marshall Islands and Marshallese people are seen as disposable.”

The experience of having islands vaporized, or made too deadly to live on, has given Marshallese people a sense of urgency about climate change, Jetñil-Kijiner said. “We as Marshallese people are coming into the conversation with a background in this history of nuclear legacy,” she said. “We’ve already lost islands, and we know that pain already. And so that’s why we’re fighting so hard against climate change.”

While the world promised to abide by the Paris Agreement in 2015 to reduce temperatures to two degrees Celsius above pre-industrial levels, leaders of Pacific nations have called on the world to prevent at least 1.5 degree Celsius increases in temperatures to stave off disaster for their nations.

Jetñil-Kijiner wrote a poem for CNN about the seemingly small yet crucial difference between 1.5 and two degrees of warming.

Before her performance, Jetñil-Kijiner visited the special collections in the back of the Burke Museum to meet with Pacific Islander students including Cruz and Crisostomo, and to see examples of Marshallese jaki-ed weaving from the 1890s, which are too fragile to on display under glass. Jetñil-Kijiner admired the rich colors and intricate, fine patterns in the weaving, remarking, “This would be amazing to wear.” In September, she took a three-week weaving workshop in the Marshall Islands with a master weaver who had revived the traditional art. She’ll incorporate her jaki-ed weaving skills into a future project, a performance for the Asian Pacific Triennial of Contemporary Art in Australia in November 2018. It’s a festival that until now hasn’t included many artists from Micronesia.

No matter what challenges the future holds, the Marshallese will continue strong, Jetñil-Kijiner said. “It’s a unique, living culture, and it’s not something that’s dead or dying or in danger of disappearing beneath the waves,” she said. “We’re a thriving and living being.”