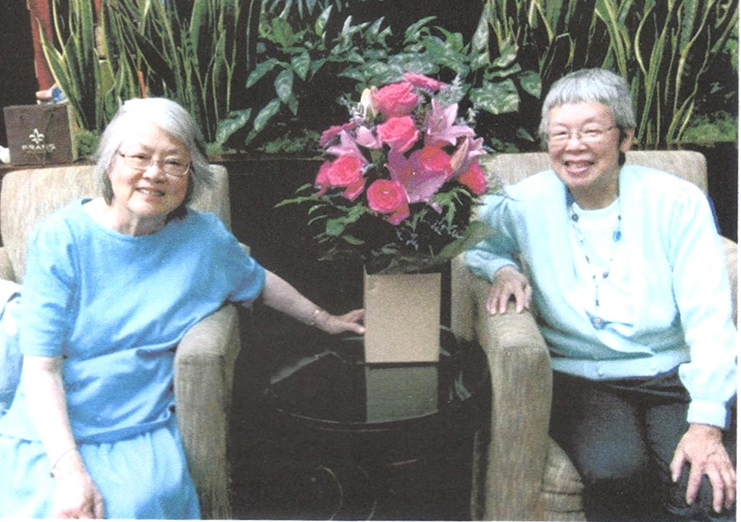 Both Marge and Maxine will be deeply missed by countless friends and associates in the Asian Pacific American and non-profit communities.

As adults, their jobs took different paths, but they remained dear friends, sharing many community activities together. Both were enthusiastic supporters of the Wing Luke Museum, Jade Guild Chinese Women’s Club, International Community Health Services (ICHS) and the Seattle Chapter of the OCA-Asian Pacific American Advocates.

Wing Luke Museum Director Beth Takekawa remarked, “I will light a candle for Maxine, and for Marge. I sure will miss Maxine walking through the museum with her twinkling eyes, saying ‘I’m bringing more kids to the Museum next week, and I’m going to make sure they know how to act when they’re here too!’”

Tagoipah Mathno, ICHS Foundation development coordinator, said, “Maxine Loo was the first major donor that I met and connected with. I was excited when I found out she used to work at Franklin High School, my alma mater. She was so kind and welcoming.”

Those who knew Marge remember her sweet smile and gentle demeanor. Behind that appearance was a fierce resolve to take care of her family and work. Marge was widowed with four children between the ages of 4 and 14–John, Joseph, James and Jade. Initially without a job, Marge threw her energies into volunteering and PTSA work. This was hard. At one point, her children attended four different schools.

Marge later worked at the University of Washington’s Department of Medicine as a medical technologist, researching pediatric immunology.

Entering Catholicism as an adult, Marge became active at St John’s Parrish on Phinney Ridge. Good friend Lynn Gough remarked; “Early on she became a Eucharistic minister at the 8:30 Sunday morning Mass; she was quick to volunteer for our of church activities, an environment worker, and she participated in the jail ministry.

Marge and her son John had the opportunity to travel. Spain was their favorite destination. They also took part in organizing a tour of China to visit her father’s house in the Luke Family village in 2013. John recalled that Maxine went with them on the trip to China. “The Loo village is only about 30 miles away from the Luke village as the crow flies,” he said. “I suppose their spirits were always meant to be close together.”

Like Marge, Maxine Loo also had a sweet smile and cheery disposition. She was proud of her humble Chinatown roots. Her family’s pumpkin-colored house, one of the few single family residences still standing in the International District area, sits on the corner of King Street South and South 12th Avenue.

Her father and uncle owned the Quong Wah Company, a live poultry shop on King Street next to Tai Tung Restaurant. Maxine worked there as a child. She attended Bailey Gatzert Elementary School, Washington Junior High and Garfield High School.

After graduation, Maxine taught ESL (English as a Second Language) in Central Area schools like Franklin High, serving English language learners. She eagerly looked forward to attending the ICHS Foundation’s annual bloom gala with Marge so that she could support charity care for low-income immigrants and refugees. Like Marge, Maxine also led tours of The Wing Luke Museum and spoke to students about Wing Luke.

Teresa Loo, Maxine’s niece, recalled, “I don’t know anybody that loved life more than my aunt Maxine. I remember her traveling the world, making the most of everything. It wasn’t until she became ill and I started taking her to doctor’s visits that I began to realize how full her life was. She didn’t let anything stop her.

“Our family has a tradition of getting together in Long Beach, Washington. This past year, Maxine had just turned 70. It was August. Several of us said, ‘Hey Maxine, some of us want to take you surfing.’ There was a wager on whether she would do it. One of the older kids said, ‘This might be the limit.’ But she didn’t even flinch. She got in a wet suit. It was so much fun. The surf instructor said she was oldest student he had ever taught.”

Bettie Luke is the younger sister of Marge Young. Ron Chew is director of the ICHS Foundation.