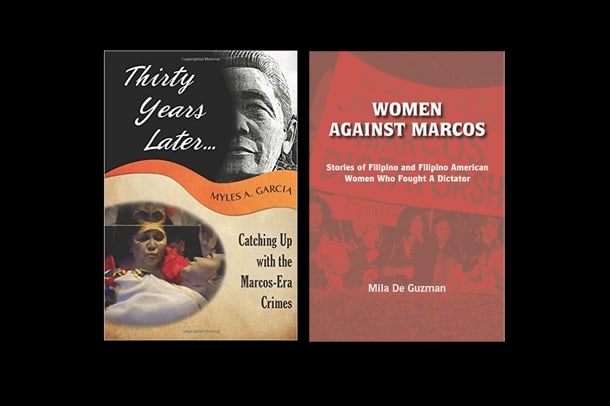 These are the sentiments that echo across Mila De Guzman’s Women Against Marcos and Myles Garcia’s Thirty Years Later, two books that chronicle the 20-year regime of Ferdinand Marcos, albeit in different ways. With their different perspectives, the two books explore with deft the trials and horrors imposed upon Philippine society by a power-hungry dictator. The sentiment is clear: never, ever forget what happened. And with that knowledge, do your best to pave a bright future where these atrocities will not be committed once more.

Women Against Marcos was enthralling from the start. De Guzman frames the book so the spotlight is on the people under Marcos’ rule—six individual women, plus her sister Violeta. All the women made a valiant stance against Ferdinand Marcos and his corrupt, freedom-suppressing rule.

With that focus in mind, she also clearly organized the accounts of the women chronologically. Starting with the “First Quarter Storm,” the surge of unrest that resulted in the implementation of martial law, the books segues into life in the underground, as the women—from journalist Mila Aguilar to activist Aida Santos—worked to discredit Marcos while trying to maintain the difficult balance of staying hidden and protected.

The book then shines a light on Filipino American women, as they rallied for the same cause in the United States. Geline Avila, who leaves the Philippines in the beginning of the book for her safety, returns triumphantly in this later portion as she becomes a leading figure of the opposition movement, which raised awareness of Marcos’ crimes during his U.S. state visit in 1982. The People Power Revolution is covered in a satisfying climax, and the ousting of Marcos from power and the aftermath is personalized through the accounts of Sister Mary John Mananzan and Cindy Domingo. Short accounts are then given of what the book’s women have done since then. It’s inspiring to read that many of them have stuck to activism—setting examples for generations to come.

Many details of the book emphasize that real humans lived and fought for their just causes. Across the many accounts, the women recall their upbringing, with much of their past influencing them to become the people they are today. And when they lived in the underground, their struggles felt real and personal, like including Aurora De Dios’ and Aguilar’s balance of childrearing and activism.

Moreover, they all face sexism, both in the movement and in society at large. The focus of this book allows the reader to experience a unique understanding of what these women went through. Sexual assault of female political prisoners was rampant, and while they worked within the movement their capabilities were doubted solely because of the fact that they were women. Male resistance leaders did not trust their ability to lead and act, much to women’s chagrin. However, the character they all display throughout their journeys is admirable. Women Against Marcos is a solid testament to the enduring strength of the human spirit, particularly the female one, to challenge the status quo and demand that true equal rights be bestowed upon the people.

The byline of Thirty Years Later… is “Catching up with the Marcos-Era crimes.” Myles Garcia focuses his book on just that: the many, many actions of Ferdinand and Imelda Marcos, and the light that needs to be shown on what they did.

Garcia’s writing takes the serious subject matter and recounts it with his own witty and often sarcastic take on these political figures he despises. To his credit, Garcia is aware of his bias, and addresses it early on in an admirable way: His derision of the Marcos family is his own way of taking a stand against them. It would be frivolous to stay objective in a book about the crimes of corrupt politicians, and his writing takes no punches. It’s an engaging way of holding the reader’s attention. From describing the Malacañang Palace as the “self-insulated cocoon” of Ferdinand and Imelda Marcos to Imelda’s extravagant globetrotting making her “like a bat out of hell,” Garcia imbues his accounts with humorous yet piercing criticism.

By all means, Garcia has compiled a very extensive list of the activities and shady undertakings of the Marcos family. Garcia’s organization of his research is clear, partitioning his writing between Marcos’ exile in Hawai‘i, the attempts to discover what became of their stolen wealth, and their climb back to power. Reading about Ferdinand “Bongbong” Marcos Jr., Marcos’ son, in this book was chilling, given that the book was released before his failed attempt at securing the vice-presidency earlier this month.

At times, however, there is an overflow of information given to the reader that is a bit difficult to digest at first read. Also, topics switch constantly within the chapters. That may be a consequence of the sheer amount of coverage that Garcia has compiled, though. The grievances of what has been done are so many and so varied.

Both Women Against Marcos and Thirty Years Later” succeed in revealing to their readers a showcase of important knowledge and voices that have gone unheard. Much is forgotten in the tides of history—the contributions of everyday people, the crimes of those in power. De Guzman and Garcia alike do a justice in utilizing their voices to bring about much needed awareness. Reading these books will leave anyone feeling closer to the people who suffered and fought for later generations, and cognizant of how far the influential will go in asserting their power. Never forget, never again.