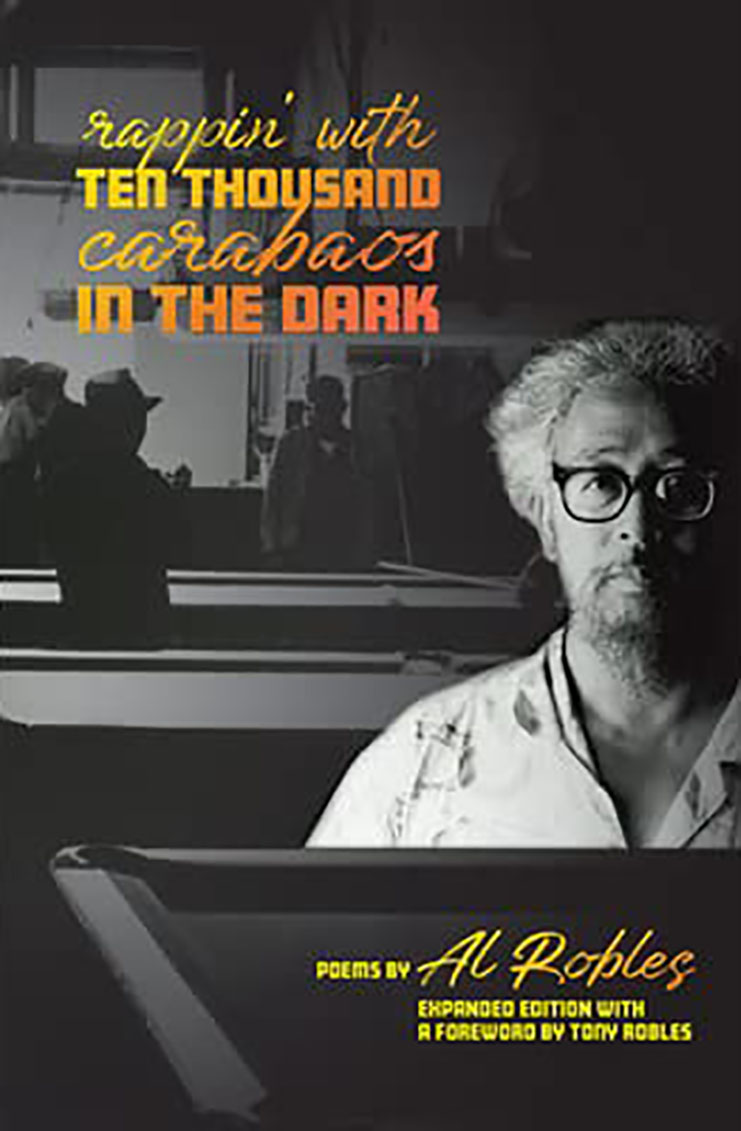 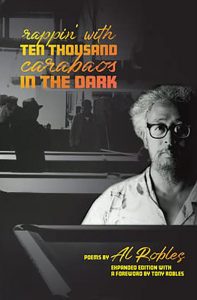 Rappin’ with Ten Thousand Carabaos in the Dark is a re-release of Filipino-American poet Al Robles’ collection that was originally published in 1996. This is an expanded edition which includes the essay “Hanging on to the Carabao’s Tail” (1989) and a new foreword by Al Robles’ nephew, poet Tony Robles. It was published in November 2020 by the UCLA Asian American Studies Center to commemorate the Center’s 50th anniversary.

These poems offer insight into the beginnings of Filipino-American identity, and the book’s title hints at this. Carabaos are water buffalo native to the Philippines, and here they represent the men of the Manong (“elder brother”) Generation, the first wave of Filipino immigrants who crossed ocean waters to become workers in the United States during the early years of American colonization. The Manongs would create the first “Little Manila” communities in California, and form the lesser-known half of the United Farm Workers whose Delano Grape Strike would help progress labor rights in the 1960s. Robles, who is “rappin’ in the dark,” is talking and singing with the Manongs in the twilight of their lives, sharing their stories and shedding light on these unsung but monumental Americans.

Robles’ poems meet somewhere at the crossroads of a quintessential hero’s quest and One Thousand and One Nights. The opening poem frames the collection as the poet’s journey through time in the shape of a mountain:

Along the way, the poet encounters the characters belonging to the landscape, each with a mythical air about them, manifesting in front of him in the shape of a Pilipino fisherman, an Ifugao hunter, and a Manong in a pool hall. After this folkloric introduction, every poem to follow feels like another step along the mountain, and another story lyrically telling the life of a different Manong that the poet meets along the way. With the feel of Impressionist technique, Robles’ lines are bursts of short strokes, each glimpsing small elements that capture a mood, that then layer to give shape, movement, and emotionality to the portrait of each Manong. The language reads easily even as the poems may drift into a misty mysticism.

Just as the Manongs lived in a seasonal cycle, working half of the year on farmland and field, and the other half in low-wage jobs in the city, the poems shift between natural and urban settings. Robles writes most intimately of San Francisco’s International Hotel and the spaces like Chinatown that Filipinos shared with Chinese and Japanese immigrants. There is always the sense that the city is for the People, since it was built by the brown hands of the People. Russell Leong, former Amerasia Journal editor, describes the stars of Robles’ work: “His poetry is inhabited by farm laborers, factory workers, Zen monks, pool hustlers, cooks, children, lovers, gamblers, preachers, warriors, pimps, prostitutes, young bloods, musicians, tricksters, barbers, stray Buddhas and goddesses.”

The Walt Whitman-esque, winding list gets at the multiplicity at the heart of this collection, saying that this is the new America singing. And it is indeed music that drives the poems forward and gives the work its pulse and power. The jazz that inspired Robles inevitably braids itself into the rhythm of his work:

What motivated Robles to be this oral historian, this community poet, who spent his life telling other people’s stories and struggles? Perhaps the book’s ending essay, “Hanging on to the Carabao’s Tail” approaches the answer:

“You are in the company of your people…sacred lives, who have lived a thousand times, filling every surging river…And the lesson they teach us is clear: ‘we must always be in the company of the poor, the oppressed, the lonely — to bring us closer to the reality of ourselves’…We celebrate our freedom through Asian American poetry.”

Years after Robles’ death, his work continues to inspire. He himself has become a Manong, the guiding voice to younger generations of Filipinx poets who flourish in the brown spaces that Robles founded and nurtured, like San Francisco’s Kearny Street Workshop. The cycle perpetuates, the Philippine diaspora continues to cross oceans, and we all make our way to Ifugao Mountain –  singing and dancing, bolo knives to the sky.