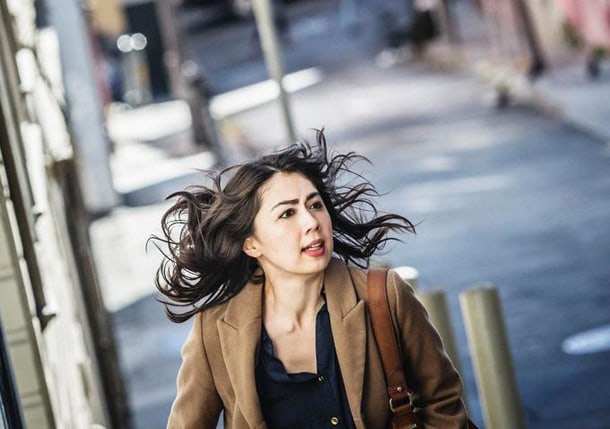 With four movies in distribution, Dave Boyle is among the most prolific of U.S. independent filmmakers working today. Yet, all his films feature characters of Japanese descent—some nationals, some Americans, but all intriguing.

With his latest, Man from Reno, Boyle once again tackles the concept of identity, but this time in a noir style. Again featuring Japanese characters, the story is set in San Francisco with a Japanese mystery writer who ends up entangled in a mystery of her own. Below, Boyle discusses it with International Examiner.

International Examiner: Man from Reno is quite a departure from your usual fish-out-of-water, comedic fare. What propelled you to make such a dark film?

Boyle: Honestly, I’m not sure why it took me so long. I’ve always been a huge fan of the mystery genre. I grew up watching Hitchcock films and my favorite movie as a kid was The Maltese Falcon. I guess I just wanted to wait until I had enough experience to tackle such a challenging genre.

IE: In dealing with film noir, in what ways were you shaped by that tradition and in what ways did you decide to change it to make it different?

Boyle: I was influenced by the storytelling style, but not necessarily the visual or acting style. Many of the great film noir stories have dizzyingly complex plot lines, and I wanted to make something similarly rich with tons of intersecting characters and sub plots. However, I didn’t want to do the usual noir visual style of black and white with canted angles and heavy shadows. We wanted to create our own visual language for the movie.

IE: Why did you decide to make this story cross-cultural with Japanese nationals in America?

Boyle: First and foremost, I felt like I hadn’t seen a truly cross-cultural noir before. I think that stories that reflect diversity are generally more interesting and have more opportunities for me as a storyteller. I also wanted to work with my friend Ayako Fujitani again and wrote this part for her. Another big reason: this was a collaboration with a Japanese company and was designed to reach both audiences in Japan and America.

IE: How difficult was it to find Japanese actors who were also proficient English speakers?

Boyle: Not hard at all. From my very first film Big Dreams, Little Tokyo, I’ve found there are many wonderful actors in L.A. who are bilingual, but there just aren’t many roles in Hollywood films for them to be cast in.

IE: In making your protagonist a famous mystery writer, were you aware of the long-standing popularity of mysteries among the Japanese book reading public?

Boyle: Very much so. As a matter of fact, I’m a big fan of Japanese detective fiction and I was trying to fuse their mystery traditions with the more American “hard boiled” school of storytelling with this film. I’m particularly fond of Seicho Matsumoto and Akimitsu Takagi, whose post-war novels are a great window on a fascinating era of Japanese history.

IE: The cinematography in the film is almost like another character in the way it shapes and colors the film’s emotion and mood. Where did you find the cameraman, Richard Wong?

Boyle: I’ve known Rich for a long time and even acted in a film that he directed called Yes We’re Open. He was with me when I first came up with the idea for Man from Reno, and we were on the same page about how the film should look from the very beginning. We decided to eschew a lot of modern conventions—hand held camera, steadicam, etc.—and shoot it very classically. He is a great collaborator and is also a San Francisco native—so he really knows how to shoot that city.

IE: All your films are about Japanese, Japanese Americans and/or Japanese culture. How did you become so enamored of Japanese?

Boyle: I was a Mormon missionary in Sydney, Australia assigned to a Japanese congregation way back when I was 19 years old. That’s how I first came to learn to speak Japanese, and I continued studying it in college. When I started making films, it was only natural that I collaborate with Japanese artists, producers, and actors in telling stories.

‘Man from Reno’ shows at the Northwest Film Forum from April 30 to May 4. For more info, visit http://www.nwfilmforum.org.