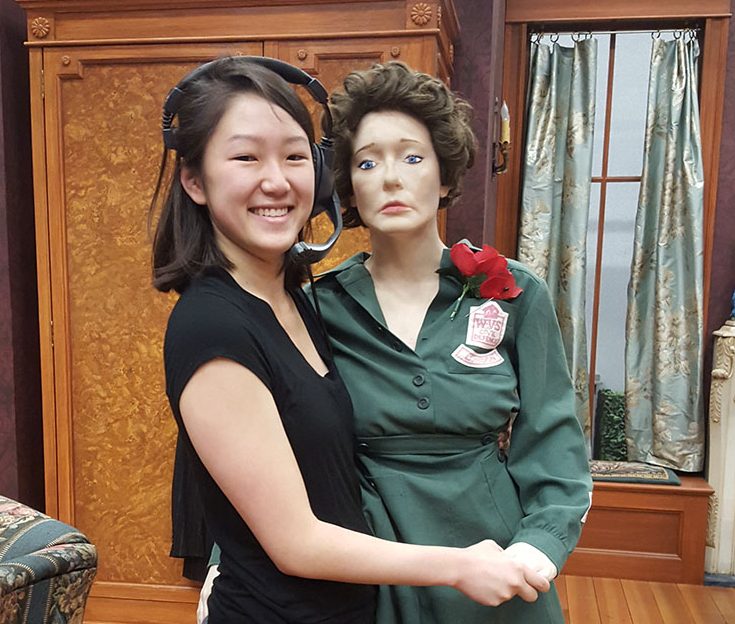 Malie Fujii is keeping things running like clockwork. In her role as a stage manager for various theatres around town, she has called cues, directed technicians backstage, and kept actors on time and in place.

Fujii came to the theatre circuitously. “Back when I was a disinterested, unfulfilled business major at UW, I took on a marketing internship at a local theatre,” she said, “and found I was much more curious about the production side of things than the business side.”

Her curiosity led her to new explorations. “After the internship, I signed up for some classes in the drama department to test out the whole theatre thing, and was amazed to find a community that not only embraced, but depended on the cooperation of individuals with vastly different personalities, skills, and backgrounds,” she said. “Group projects were a nightmare in business school, but in theatre, collaboration was not only fun, but a lot more productive!”

Employment in theatre came quickly after that. “For my first-ever theatre gig, I signed up to be an assistant stage manager on a student show because the listserv email said ‘no experience required,’ and I fit the bill,” Fujii said. “I did mostly nothing for the duration of that project, but just being in the room and watching the show evolve each day was fascinating.”

Fujii credits other local theatre artists with a lot of her growth and satisfaction. “Like many Asian American theatre artists in town, I look up to Kathy Hsieh and am incredibly grateful for the growing culture of equity and inclusion she has helped establish in this community,” Fujii said. “I took Kathy’s Asian American Theatre as Social Change class in college, and most of the work I’ve done since has been guided by concepts I first learned in her class.”

Fujii has especially enjoyed taking this perspective to theatre companies that have shared her views. “My favorite theatre I’ve worked with is Sound Theatre Company,” she said of the theatre company founded by Producing Artistic Director Teresa Thuman. “What sets them apart is that they act on their values, even when it’s not necessarily convenient or comfortable to do so.”

That’s not to say that Fujii hasn’t encountered obstacles in pursuing her theatre goals. “Money! Time! Traffic! The list goes on!” she said. “Theatre is frustrating for so many reasons, but I really do think it gives so much more than it takes, as corny as that sounds.”

Fujii retains a good sense of humor around all this. “I try to remind myself as often as I can that I’m privileged to be doing work I’m passionate about,” she said. “How lucky am I that the challenges in my life include fake mustaches, staged food fights, and imaginary languages?”

She tackles the wide variety of impromptu tasks that arise during rehearsal and performance with a hands-on attitude. “Now that I sort of know what I’m doing as a stage manager,” she said, “I love that I get to actively support a production at every step of the process.”

But Fujii sees bigger challenges ahead for the theatre community as a whole. “I want to see Seattle theatre companies take bigger, braver steps toward equity and inclusion,” she said. “I’m a pretty impatient person, and am going to take time off from stage management to figure out how I can help speed things along as an arts administrator and activist. That’s the goal for the near future.”

Regardless of what specific roles that Fujii takes up as time goes on, she expects to continue promoting theatre. “I stumbled upon theatre in such an arbitrary way,” she said, “and now it drives almost every aspect of my life.”