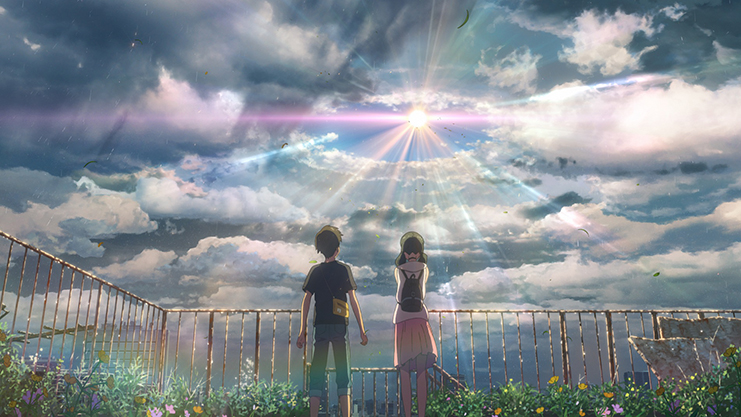 Director Makoto Shinkai got his big break worldwide with his mega-blockbuster hit Your Name (Kimi No Na Wa), which became the fourth highest grossing film of all time in Japan, even surpassing that of Hayao Miyazaki’s Spirited Away by 2017. Critics hail him as “the new Hayao Miyazaki” to which Shinkai always demurs, but even he seems to acknowledge that the baton may have been passed on to him, and that he would like to take advantage of the opportunity while it lasts to make his mark in animation.

His next feature film is Weathering with You, which will have special fan preview screenings on January 15 and 16 and a nationwide theatrical release starting January 17. Originally released on July 19 in Japan, it was the number one film during its opening weekend, and as of August, it has climbed its way to become the ninth highest grossing film in Japan’s history. Japan’s official pick for the international film category for the Oscar’s, Weathering with You will have dubbed and subbed viewings at 7:00 and 8:00 PM respectively for the special fan previews.

Shinkai got his first inspiration for Weathering with You after an exhaustive day promoting Your Name in 2016. As he looked up at the sky, he saw a cumulonimbus, a colossal cloud that spreads upwards and hangs at low altitudes, sometimes acting as a precursor to a storm. As the sky cleared and the sun came out, Shinkai immediately felt better, giving him the impression that the human spirit is somehow linked with the weather. He also wanted to address climate change, a phenomena that is becoming more noticeable during the summer in Japan as it rains longer and more aggressively, and its once distinct four seasons become increasingly blurred.

Although Shinkai received criticism for using a natural disaster as the crux of the plot for Your Name, he decided to risk receiving added criticism by centering his next story around a climate disaster. The film takes place in the Kanto region, the area that encompasses the Greater Tokyo Area as well as seven other prefectures. In Weathering with You, the region is inundated with nonstop rainfall for two months, causing floods, accidents and other problems.

“Climate change is a large-scale phenomenon with an unimaginable scope, but there’s not much a person can do about it on an individual level,” said Shinkai in an “Anime News Network” article. “Even so, my actions as a single person have a definite effect on the environment. It may feel like something that’s out of your realm of responsibility, but it absolutely isn’t. I made the film while thinking about how to deal with that problem through the framework of entertainment.”

Nonstop rain? Should be something Seattleites can relate to in general, not to mention the heavy rainfall the city has been getting lately.

The film revolves around two protagonists, Hodaka Morishima and Hina Amano. Hodaka is a 16-year old runaway from a rural coastal town who tries to make it on his own in Tokyo. Hina is what Japanese society would call a “100% hare onna” or “100% sunshine girl,” a person who makes the weather sunny whenever she goes outside. Except in her case, Hina’s prayers for sunshine are always answered. She has been hard at work, taking care of her younger brother by herself ever since their mother passed away.

After many failed attempts to find work that requires no identification, Hodaka turns to Keisuke Suga, a man who saved his life while he was on a ferry going to Tokyo. Suga runs a small business with his assistant Natsumi, writing and editing articles for publications that investigate the strange and otherworldly. Reminded of his own past and youth, he hires Hodaka as his live-in assistant to help them with their duties and chores. Feeling needed and useful for the first time in his life, he enjoys his new role.

Hodaka and Hina first meet at a McDonald’s during a low point in his early days in Tokyo before he turns to Suga. Not having enough money to even buy a hamburger, Hodaka was literally starving. Taking pity on him, Hina, a McDonald’s employee at the time, gave him a free Big Mac on the sly. Remembering her kindness, he attempts to rescue her weeks later when he sees her about to enter the premises of a sex bar with a sleazy man who works there.

After they escape, she reveals her secret to him, which gives him the idea to start a sunshine business. With the help of her younger brother Nagi, they fulfill sunshine requests submitted online from people who wish for a few hours of sunshine for a special event in their life. Finding purpose in her life for the first time, Hina is thankful to Hodaka.

Things quickly go south as Hodaka, Hina and Nagi find themselves homeless and at the mercy of the climate madness. As the temperature gets freezing cold in the middle of August, the three must ask themselves if they would rather sacrifice one of their own so that the climate would return to normal or stick together as a family to sustain their own happiness.

Cameo appearances from Your Name protagonists Taki Tachibana and Mitsuha Miyamizu are sure to be nice surprises for fans. And no, Shinkai is not bent on creating a Shinkai universe with his films. Their appearances were only done as a service for his fans.

Although Weathering with You has Shinkai’s signature landscape shots of breathtaking beauty and his use of cheery and saturated colors, the story—though an interesting concept with an interesting spin on a cultural notion—lacks the sophistication and intricate storytelling of Your Name; it would be unfair and a disservice for the film if audiences watch it expecting it to be a similar repeat of his last movie. Hodaka himself can be a bit grating at times as his high strung emotions overtake him, causing him to make reckless decisions that could easily get him in serious trouble with the law and harm others around him. The use of a gun in the storyline is overkill and not something I am all too keen on as well.

All in all, the movie itself is an interesting and beautiful film to watch, as are many of Shinkai’s stories, with interesting questions to ponder and discuss afterwards.