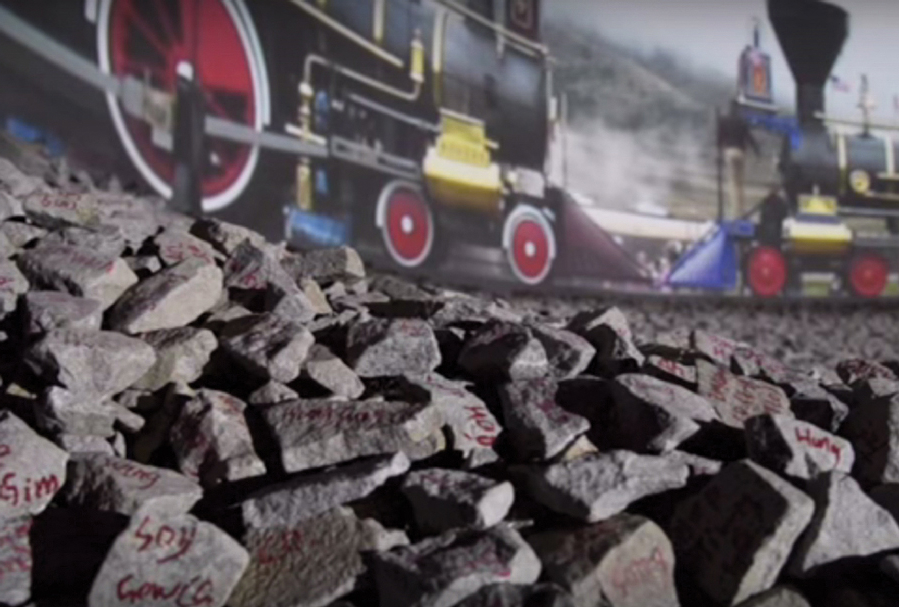 In Zhi Lin: In Search of the Lost History of Chinese Migrants and the Transcontinental Railroads at the Tacoma Art Museum (TAM) now through February 18, 2018, internationally acclaimed artist Zhi Lin invites us to look at neglected history: the history of tens of thousands of Chinese men who did back-breaking work to build the Transcontinental Railroad in the West, and the thousands who died. “They are rarely recognized in American history and this absence is an animating force in Lin’s work,” TAM said in a statement. Anti-Chinese racism persisted during and for decades after the railroad construction, even leaving an ugly stain in Tacoma’s history. Lin’s art takes us on a journey of discovery of this history.

Lin recalls a moment in 2001, while driving through Wyoming and Utah, passing a train. It triggered Lin’s memory of a book about Chinese migrants he had read as a teen in China. That spark has led him to immerse himself into finding out about these Chinese migrants, and imagining their circumstances. He has absorbed into his mind and heart the loss and pain they felt. Then through his art, Lin creates a vehicle for us to imagine them.

In 1869, the Transcontinental Railroad was completed, when the rail from the East met the rail from the West. A tremendous celebration took place at the site, and all through the nation. We know the event from a famous A. J. Russell photograph. The Chinese who laid the last tracks to consummate the marriage of the rails were excluded on purpose from the photograph.

Each year, this marriage is re-enacted based on Russell’s photograph. Zhi Lin has attended several re-enactments, and created a monumental video and sound installation, Chinaman’s Chance on Promontory Summit: Golden Spike Celebration, 12:30 pm, 10th May 1869.

Lin imagines where the excluded Chinese might have stood at the marriage, and films his video from “back stage.” From this odd “back stage” vintage point, we realize that the Russell photo only shows one “staged” moment and place, and innumerable other unseen moments and spaces are just as historical.

Placed in front of the video screen are piles of ballasts, with hundreds of them inscribed with names of Chinese workers. Remarkably, a few hundred names may be the only historical information we have of individual Chinese migrants out of the tens of thousands.

In the exhibit, we also see five large abstract paintings, Snowstorm…, May Sky…, Sunset…, Constellations…, Elev. 2,425 ft…They are large to envelope us and our senses. We see ghostly traces of Chinese migrants. Like their history fading into memory, their traces / imprints seem to dissolve into the landscape: the snow, the stars, the sunsets. We imagine the Chinese railroad workers enveloped by the forces and beauty of nature, while they also experienced dangerous work, broken dreams, and the indignity of being treated as second class people.

Lin has traveled to many of the remote sites where the transcontinental railway was built, in the hot summers and icy winters, to feel a fraction of what the Chinese workers felt. He’s also traveled to places where the Chinese lived after the railroad was completed, and continued to face anti-Chinese racism. He’s made many sketches in pale ink of these places as they appear now. He names this series of sketches “Invisible and Unwelcomed People.” He also adds field notes, like a 19th century scientist, about the places and their historical relevance.

Looking at the sketches, we wonder if the Chinese ever did similar sketches of their surroundings over a hundred years ago, as personal mementos. Looking at the sketches, we realize how ordinary these places appear now. There is nothing to remind us of the Chinese that lived and worked there. For Lin to sketch these places and for us to look at them are like a meditation of what is missing. When we look at these perfectly ordinary places, we share the artist’s feeling of loss, of wondering why there are no traces of the extraordinary things that happened. And when we read his field notes, we share the artist’s discovery of a slice of neglected history. His writing is so small that we have to strain to read it, to experience in a small way how some things of the past are very hard to dig up.

In the painting, The Intersection before the Bridge Crossing Bitter Creek, we quote from Lin’s notes, “On September 2, 1885, from here, a mob of hundreds of white miners armed with guns, hatchets, clubs, and knives marched, shouted anti-Chinese slogans, and crossed Bitter Creek toward Chinatown—leaving a bloody page in American history … .”

Throughout the railroad construction, and after, the Chinese were “Invisible and Unwelcomed People,” and when there was a U.S. economic depression in the 1870s, the Chinese were scapegoated, culminating in the “Chinese Exclusion Act of 1882. The federal act barred ethnic Chinese from migrating to the United States. Such laws encouraged acts of violence and vigilantism against the Chinese migrants already living here, including the forced expulsion of Chinese people from Tacoma in 1885. The Act was not repealed until 1943,” according to TAM.

Lin’s work about the anti-Chinese fervor in Tacoma brings the subject close to home. On November 3, 1885, hundreds of armed white residents, led by the Tacoma 27 which included the Mayor, forcibly expelled 200 Chinese residents, confiscated and burned their homes and businesses. They were marched eight miles to the Lake View railroad station, to be shipped out of town. Lin makes sure to call this act what it is—ethnic cleansing.

We are privileged to see some of Lin’s working process, including how he overlays his research onto (copies of) historical maps and documents. Along with research, Lin also wants to feel the “expulsion.” He chooses a cold day to walk some of these eight miles of the march. Thus immersing himself mind and heart, he creates a deeply felt masterpiece, On November 3rd along Pacific Avenue in Tacoma. This long narrative scroll is crafted in the tradition of Chinese and Japanese visual storytelling. It is to be viewed from right to left, moving the viewer in space and time.

Somehow it is fitting that we get to experience the scroll in an unfinished state. Since we know so little about the 200 Chinese residents, we only get to see drawings of their outlines in black, superimposed on the present day Pacific Avenue. Using the present day familiar street-scape is, perhaps, Lin’s way of orienting us to the horror that happened one cold Tuesday a long time ago. And to point out how present-day Tacoma is partly built and shaped by these faceless people.

It is a testament to our freedom, our open-mindedness, our community strength, that the Tacoma Art Museum is empowered to present an exhibit of a Chinese American artist about an ugly slice of history even as it touches so close to home. For Asian Americans, this exhibit will touch us in a deep way. Indeed, my mind and heart were opened by Lin’s work.

Let’s end with Zhi Lin’s reason for creating these art pieces, “In the midst of the current anti-immigrant environment, it is not very hard for anyone to imagine these tragic events. Yesterday’s Chinese migrants are today’s people from our southern border. I use the contradictions represented in the artwork to call to mind our responsibilities to history and to refute the ignorance and cruelty of our society and of ourselves.”