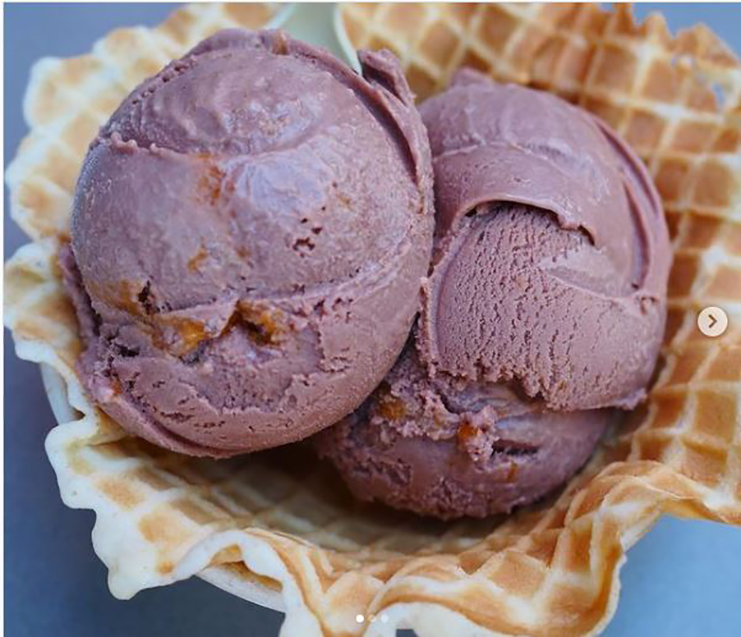 Good ice cream can be magical, and Lois Ko hopes to offer compelling alternatives for visitors to her Sweet Alchemy Ice Creamery shops in the U District, Capitol Hill and Ballard. Sweet Alchemy opened in 2016, and Ko is still imagining the journeys that ice cream can take.

Ko claims she doesn’t have a philosophy of ice cream, but she definitely has lifelong experience with this frozen dessert. “My earliest memories of ice cream are the Melona bars from convenience stores growing up in South Korea,” Ko said. “I wish I could say I grew up making ice cream with my family, but I grew up in Korea in the 90’s when western commercialization of food was widely accepted.”

Initially, Ko was drawn to visual art and came to Seattle’s U-District in 2000 to earn a BA in Art from the University of Washington. “I think the biggest contribution of going to UW Art school was fearlessness to just try a project,” she said. “The process of evolving during the act of doing is in itself a form of art.”

As an undergraduate at UW, Ko supported herself by working first as a scooper at Haagen-Dazs, and then as their manager. “While dabbling in big-girl jobs, I decided that I could do no other job better than running the ice cream shop and convinced my parents to take a loan out for my venture,” she said.

Ko sees her jump to ice cream as a transformation of her art from visual to gustatory.

“I consume a lot of ice creams and desserts,” she admitted. “It has been satisfying to use ice cream as a canvas to explore, experiment, and share.”

But Ko didn’t just plunge headlong into transforming her business aspirations. “I was a franchisee of that Haagen-Dazs Shoppe for almost 10 years before opening my own shop,” she recounted. “I think that was excellent training grounds for my flavor-level expectations in the product I now make, as well as operational savvy in running a business.”

Based on this experience, Ko pursued a new strategy regarding Sweet Alchemy’s flavor offerings. “We don’t have set monthly rotating flavors like many other ice creams shops do,” she said. “I wanted it this way so we could always be creative whenever we were inspired to be.”

Ko reports that many ice cream companies are burdened by inflexible schedules. “I didn’t want our staff and shop to be bogged down by the grueling demand of the summer to produce a certain amount of certain flavors, nor stranded with overstock ice cream during winter,” she said. “So we have rotating flavors that are different every day. It’s great experiment grounds for testing out a test batch and getting instant feedback!”

This has led Ko to offer some unique flavors, such as makgeolli, masala chai, toasted black sesame, cherry blossom, and Persian rose with cardamom. “I love more delicate and nuanced flavors that come from balancing flowers, spices and teas,” Ko said. “I do enjoy the traditional grocery store favorites that try to pack a punch in the beginning by loading the flavor with sugar, but it’s much more pleasant to experience the medley of flavors that blossom at different stages in the course of tasting.”

The origins of these ideas arose from innumerable sources. “Toasted black sesame was something I always wanted to make, as black sesame is a common dessert ingredient in Korea,” Ko recalled, “but from the perspective of my staff, the nuttiness was its shining quality so we prepped it like how we would other nutty flavors: with a hint of salt.”

Other flavors took even more experimentation. “Cherry Blossom had many iterations. We wanted a flavor to celebrate the UW cherry blossom season, but what is a cherry blossom flavor?” Ko pondered. “We experimented with frozen cherries, with dried cherries, with flower extracts and finally landed on our current product. As an homage to the Japanese ties of the UW cherry trees, we hydrated dried cherries in sake overnight and went with orange blossom water as the flower component.”

To create her ice creams, Ko decided to partner with Fresh Breeze Organics dairy in Lynden, WA. “When my baby son started drinking regular milk, he was drinking almost a gallon a day,” Ko reported. “I became obsessed with reading up on homogenization, pasteurization, feeding and cattle care as well as types of milk-producing cows.”

Ko found Fresh Breeze Organics through a milk broker. “I was adamant that I wanted to vat-pasteurize my own ice cream base and that the ingredients would be as organic as I could possibly have it,” Ko said of her discussions with the broker. “She helped choose the dairy that fit my criteria, negotiate prices between the farm and me, and set up delivery with the milk distributor.”

Despite this help, Ko has definitely faced the challenges of owning a business. “I’ve felt unsure in a lot of my big boss decisions mainly because I still see myself as an evolved (failed) art person and not an entrepreneur with business or finance background,” she admitted. “I’ve also felt a loneliness of being my own boss and have been more intentional in seeking out other minority- and women-owned businesses to visit and check in on.”

And then the COVID-19 pandemic threw everything into chaos. “Last year was like building anew,” Ko said. “It was like driving full speed in pitch blackness with nothing to guide me or us. Every decision seemed like a baseless bad decision.”

But Ko and her team persevered. “Self-doubt and worry for everyone’s safety, while pushing back on customers who wanted us to operate in ways they desired us to be, was exhausting,” she recalled. “At the same time, the encouragements and purchases from customers who were willing to adapt to the new ways we were selling was also incredible.”

Ko described the elevated level of obstacles that come with serving 700 people at three events outside Sweet Alchemy’s shops. “This week, there’s a leak in a pipe, a drain that is clogged, a machine that is failing,” she said, just getting started, “and a freezer that broke down, melted ice cream to clean, ingredients that are out of stock, cream that was shorted, big last-minute orders that we needed to call in extra people to pack, dry goods warehouse nationwide that’s out of scoop cups so new vendors needed to be searched out, photoshoot for new dessert ideas we wanted to launch, menu boards breaking, missing items to satellite shops deliveries, putting out hiring ads and scheduling new hire interviews because I’ve finally decided to open all the shops fully.”

But the workload hasn’t dampened her inspirations. “I’ve found it to be a good exercise to dabble in this fantasy, no-boundaries daydreaming of ‘in a limitless world, what would Sweet Alchemy be,’” Ko said. “I’ve left our name and logo slightly ambiguous because I can see Sweet Alchemy’s brand becoming broader.”

For now, Sweet Alchemy’s confections have spread just throughout Seattle, but Ko still feels a soft spot for her longtime home in the U District. “There’s a ‘go build your own path’ ruthlessness of the streets, but so many pockets of community scattered everywhere, too,” she said. “The diversity on the ground level also feels like I can belong here.”