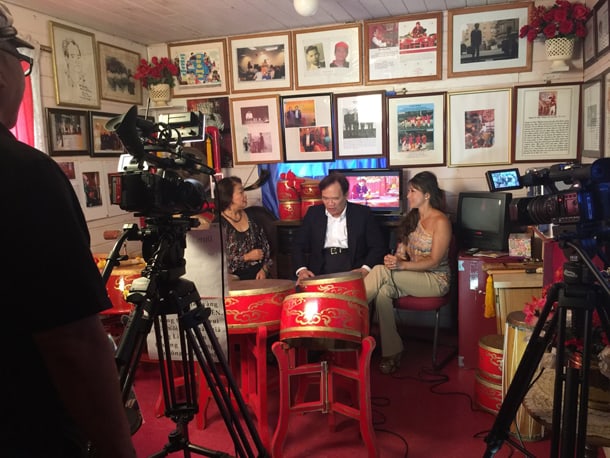 The Madalenna Lai Show, a Vietnamese American cultural television program, starring Madalenna Lai, that for the first two seasons focused the majority of its programming on Californian topics, is up in Seattle for Season 3, airing until the end of January.

Lai’s daughter, Linda Nguyen-Bennett, serves as co-host and producer for the United Entertainment show, which airs on DirecTV VGN 2073 and showcases a variety of content relevant to the Vietnamese American community. Examples of programming topics have ranged from success stories, such as AP4 Paintball Company, planning for elderly parents and legal topics, to interviewing CPAs “who are brilliant but choose to stay in the Vietnamese community.”

“To live in [the U.S.], how do you bridge the difference between the American and Vietnamese traditional ways of doing things; most who were born here are a hybrid and are different from their parents,” Nguyen-Bennett says. “In my job as producer, I want to bring in the younger generation who live a very American lifestyle and make the programming palpable so they can enjoy it more and learn the language.”

The show came to be due to the hard work of Lai in the community, Nguyen-Bennett says. Since her retirement about 15 years ago, Lai has been a prominent volunteer for Vietnamese American causes in Seattle, and through her work, she caught the attention of Nguyen-Bennett’s sister’s friend who is the owner of channel 50 on Direct TV.

“He was able to offer her an opportunity—she was trying to get a museum and she didn’t know how to get her cause out,” Nguyen-Bennett recalls. “Because she’s so connected and involved with community-based projects, he said he would love for her to bring that onto the channel.”

From there, the concept has grown into a full-fledged program.

An important aspect of the programming on the show are topics that are pertinent to both the older generation and their children, such as teaching how to be good advocates for one’s self on issues such as buying insurance. Nguyen-Bennett points out that immigrant communities, not just Vietnamese, often get taken advantage of. While those born in the United States may be better versed and more assertive, they need to stay aware their parents may fall victim to schemes and unscrupulous business practices.

In addition to more serious and educational topics, Nguyen-Bennett says it’s important to “bring in fun things as well,” such as indoor skydiving, so that viewers can see what it’s like and learn about activities available in the Pacific Northwest.

“Up in the northern states, for most Vietnamese people the information they are streaming is very Southern-California-based,” says Nguyen-Bennett. “I would like to branch out, I live in Seattle and want to bring the programming up here as well.”

The three largest Vietnamese communities in the United States are all along the West Coast, in the Los Angeles-southern California area, San Jose, and Tacoma in third, so Pacific Northwest-centered programming is definitely important, Nguyen-Bennett says. After the current season in the Pacific Northwest, the fourth season, which will begin after the Lunar New Year, will be based in San Jose. Nguyen-Bennett says they have brought the show there before for individual shows, but the next season will be entirely based there.

Nguyen-Bennett said she is is very proud of the show, and has eagerly produced over 20 episodes per season, whereas the average show on the station has 10-15 episodes in the same amount of time.

“We wanted to create a program that would do more than just announce what is going on in the community,” Nguyen-Bennett explained. “We produce original content and make it relevant.”