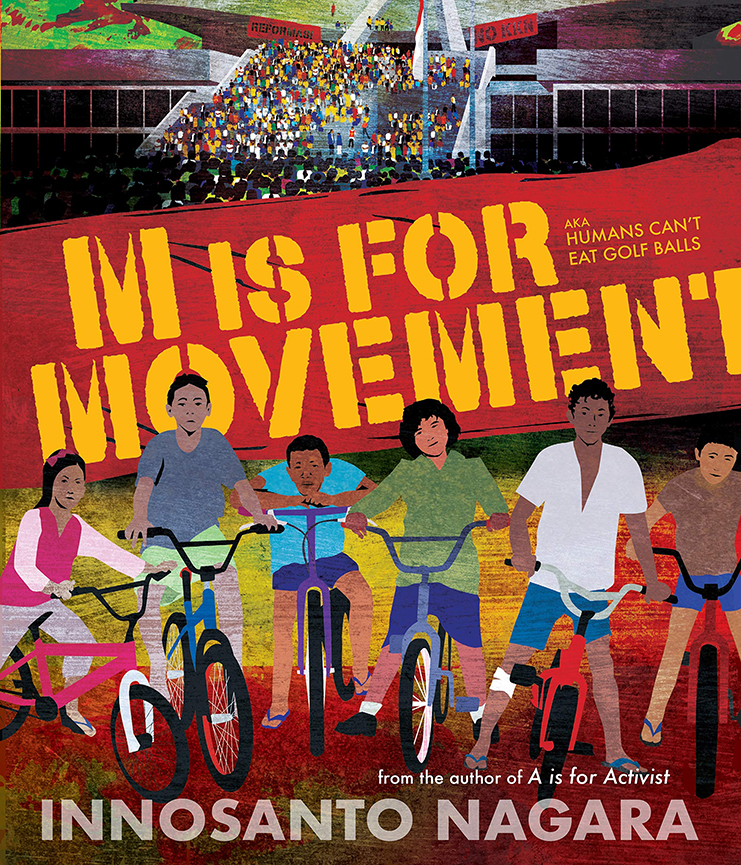 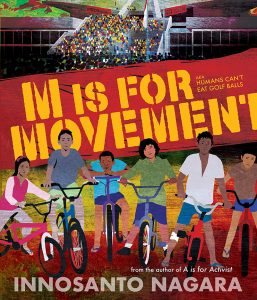 In this year of ongoing social justice protests and transformation, Innosanto Nagara’s M is for Movement AKA Humans Can’t Eat Golf Balls is beautifully relevant to all ages, while the intended audience is youth. Richly colored graphics capture Nagara’s home, Jakarta, capital of Indonesia. The faces evoke friends from Nagara’s youth and the Reformasi, a movement calling for an end to corruption, collusion and nepotism.

A rallying point of the Reformasi is captured in the slogan, “Humans Can’t Eat Golf Balls,” used by villagers opposing the golf course built on ancestral rice paddies. The protesters carved the words into the grass, successfully stalling the golf course’s opening, eventually driving out the developer. Nagara shares this story as part of his growing awareness – as well as that of his peers – going all the way back to organizing against “bullies on bikes” in elementary school.

Indonesia’s national motto is “Bhinneka tunggal ika” (“unity in diversity”). Made up of 17,000 islands, Indonesia is comprised of 350 ethnic groups. Ngara’s father is a dissident writer and his mother is from across the world. Ngara comes to discover his superpower as “Feeling like I was different meant that I was always trying to fit in, while at the same time knowing I’d never really fit in.”

Ngara explores his growing awareness of different dimensions of identities. Part of his father’s heritage is Bugis from the island of Sulawesi. The Dutch colonialists labeled the Bugis as pirates but Nagara’s father called them freedom fighters. Bugis recognize five genders, acknowledging when you are different from what people assumed at your birth.

While there is a critique of Dutch imperialism, linked to apartheid in South Africa, Ngara also discusses homegrown discrimination against the Chinese in Indonesia, similar to the many anti-Chinese laws in the U.S. that segregated the Chinese in their homes and possible occupations.

The political storm of revolution in Indonesia is part of worldwide anti-colonialist and freedom struggles in the 1970s. Ngara names the Black Panther Party, American Indian Movement and United Farm Workers, as well as other peoples’ rights movements. He recalls listening to college students arguing over tactics: can revolutionary violence birth peace? Ngara wondered how to fight when power is in the hands of the police and military. When he thinks back to the “bullies on bikes,” remembers that his friend out-organized the bullies with “people power.”

Despite the restrictions on news coverage, reformasi’s goals spread through song, internet and word of mouth.  One of Nagara’s childhood friends becomes a famous singer whose clever lyrics capture the issues and spirit of fighting back. This use of song is reminiscent of songs of the civil rights movement and the labor unions, still heard at rallies and on picket lines in the U.S.

The culmination of corruption and so many injustices brings 80,000 student to occupy the parliament building, forcing the president to resign and ending a 32-year regime. At this point of the story, Ngara is a newspaper reporter, covering these events and issues. His superpower of being different and not quite fitting in helps him as a reporter because he is able to talk with all kinds of people and ask questions that get to the truth.

The Epilogue, M is for Movement, shares wisdom and hope for struggles today. Ngara reflects on what he experienced in Indonesia, and the struggle for justice continues as evidenced by the 2019 student protests in Indonesia. Ngara calls for inclusivity and broadness in a social movement.  He says that real social change movements need all kinds of people:  those who are willing to fail and those who cannot; those who are patient and those who must jump in; those who are stubborn and those who are flexible.  Real social movements have both unity and disagreement. Ngara concludes that “For social change movements to succeed, ideas that seem like opposites are often necessary companions.” People power is our collective superpower.