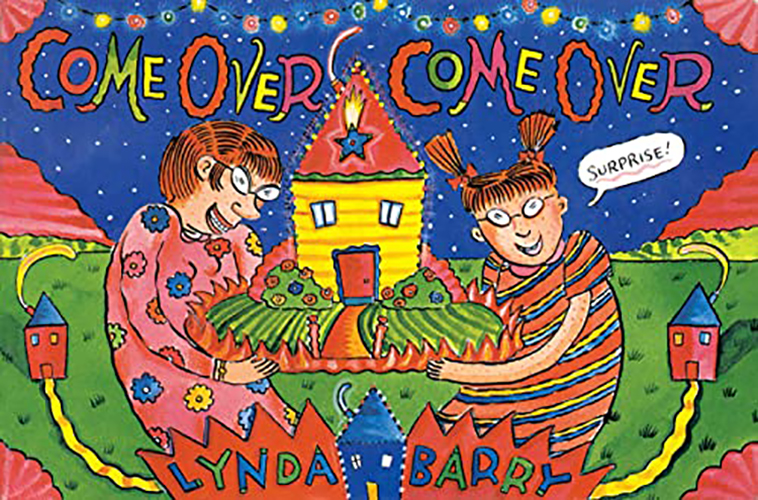 Lynda Barry’s graphic novel ‘Come Over, Come Over’ follows a Junior High young girl named Maybonne Maydelle as she navigates through her complicated life of divorced parents, school drama, and the occasional sibling fights with her sister Marlys. This Ernie Pook Collection from the early 90s highlights the struggles of adolescence while still trying to find the magical things about life. Barry captures this phenomenally by introducing us to Maybonne’s world.

What I really like about this graphic novel is that it reminds me a lot of the comics in the Sunday paper. Every two pages is a comic stripe focusing on a moment in Maybonne’s life and you have to turn the page to see another moment in her life. Unlike the comics you would see in the paper though, Barry does discuss dark topics revolving around Maybonne.

Aside from her parent’s divorce, which resulted in having a bitter mother and an alcoholic absentee father, there are subtle undertones of adult themes that Maybonne seems to be aware of but prefers not to discuss them. Most of these topics you can put two and two together and understand without it being written out for you. Which is why I do like the images to show us rather than tell us. This book also illustrates the painful reality of pre-teen anxiety and insecurities that just feel all too real.

I really feel like I’m ready for Maybonne’s story. The simply drawn characters and the handwritten portion of the graphic novel really sucks you into the life of a young girl just trying to survive her crazy upbringing. The occasional misspellings and other grammar mistakes remind you that this is a young person and I think Barry nailed that detail. Once in a while we get a few panels of Maybonne’s younger sister Marlys’ take on her life. She gives us little cute inserts here and there that allows us to break from all the harsh reality both she and her sister must endure.

It isn’t often we get coming of age stories about the dark reality of middle school. Those stories are usually lighthearted and focuses creating strong relationships with your friends and family. Lynda Barry showed us that adolescence is just as difficult as any part of one’s life because it’s true. This is the time where our bodies are changing, and it can be scary. Now, I wonder what high school is going to be like for Maybonne.